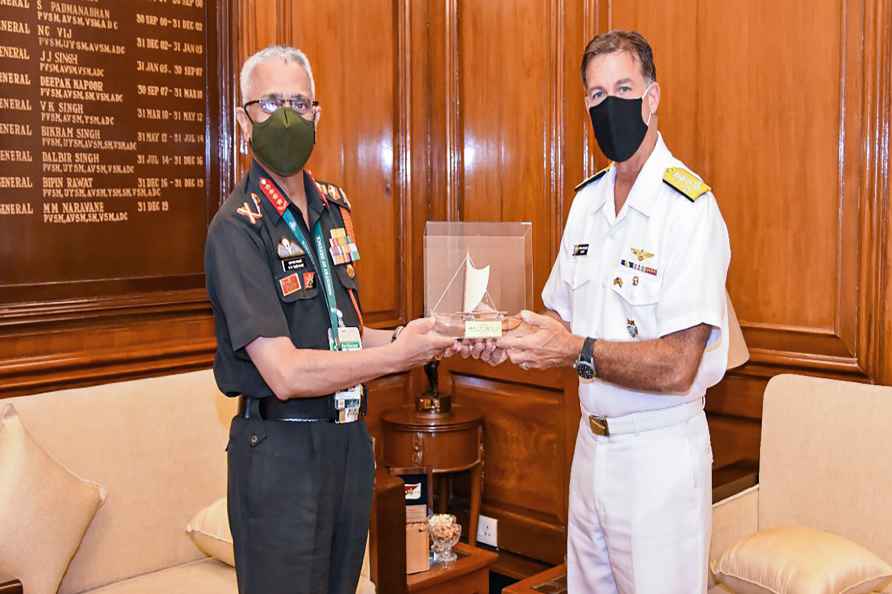 [**EDS: TWITTER IMAGE POSTED BY @adgpi** New Delhi: Chief of Army Staff of India General MM Naravane with US INDOPACOM Commander Admiral John Aquilino, during their meeting in New Delhi, Wednesday, Aug 25, 2021. ( /PTI] New Delhi, Aug 25 : Everything that has happened in Afghanistan was something that had been anticipated but the timeline had changed, India's Chief of Defence Staff, Gen Bipin Rawat said on Wednesday. Speaking at a seminar co-chaired by Commander of the US Indo-Pacific Command, Admiral John C. Aquilino, he noted that from the Indian perspective, "we were anticipating that Taliban would take over the Afghanistan". "We were concerned about how the terrorist activities from Afghanistan could spill over to India ... our contingency planning has been ongoing and we are prepared for that. The timeline has certainly surprised us," General Rawat said. He, however, pointed out that Taliban is same as it was 20 years ago. "It is the same Taliban with different partners," he said. Taliban took control of Afghanistan on August, making the situation worse with many Afghan nationals fleeing the war-torn country. The conflict is pushing the people of Afghanistan into a humanitarian catastrophe. India has reiterated that said the current situation in Afghanistan is of great concern to it and hopes that the country does not pose a challenge to its neighbours and is not used by terrorist groups such as LeT and JeM. Earlier in the day, General Rawat and Admiral Aquilino held a meeting in New Delhi over the prevailing crisis in Afghanistan. A Defence Ministry statement said that they discussed "issues related to peace and security in the region". They also held talks over bilateral defence cooperation. Admiral Aquilino also held meetings with all three service chiefs and Defence Secretary Ajay Kumar. Earlier in the day, Admiral Aquilino began his visit by paying tribute to the fallen heroes by laying a wreath at the National War Memorial in New Delhi. "He is on an official visit to India from August 24-26, 2021," the ministry said. /IANS

Active Covid cases drop below 1% as India logs just over 29.5K new ones

Varanasi: Railway authorities demolish illegal structures for the expansion of a platform at the Varanasi Cantt Station in Varanasi, Saturday, Sept. 25, 2021. ( /PTI […]

Juba, Sep 25 : South Sudan's ceasefire monitoring body said that recent and past defections of military officers from the opposition are derailing the implementation of the security arrangement that i […]