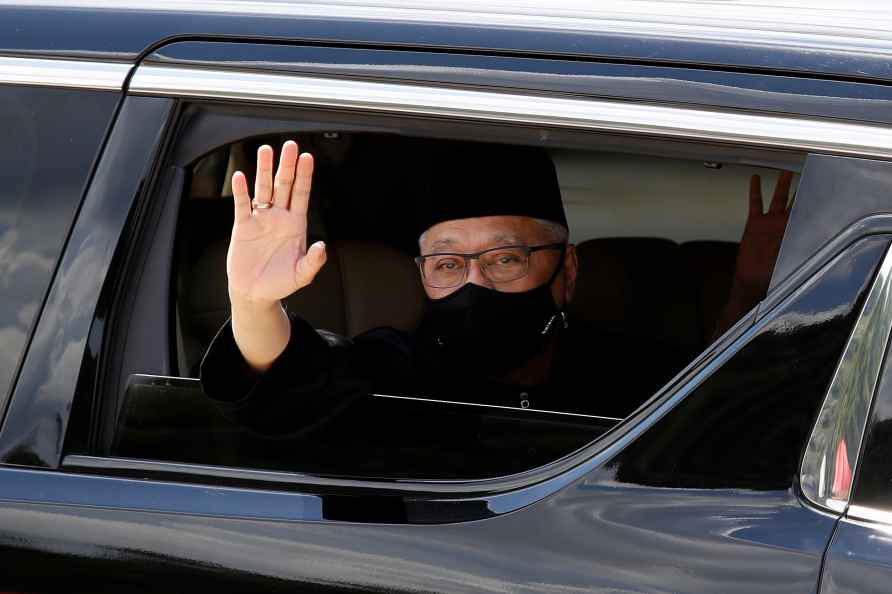 [Kuala Lumpur: Malaysia's new Prime Minister Ismail Sabri Yaakob waves as he leaves the National Palace after swearing-in ceremony in Kuala Lumpur, Malaysia, Saturday, Aug. 21, 2021. Ismail was sworn in Saturday, bringing back the rule of the country's longest-governing political party, but he faces a tall task in uniting a polarized society and reviving a slumping economy amid a worsening pandemic. /PTI] Kuala Lumpur, Aug 21 : Malaysia's King Sultan Abdullah Sultan Ahmad Shah has appointed former Deputy Prime Minister Ismail Sabri Yaakob as new Prime Minister of the country, the national palace announced. In a statement on Friday, the national palace said Sabri had received the backing of 114 out of the 220 MPs in the lower house of Parliament, a simple majority to form the government, hence Sultan Abdullah agreed to appoint him as the Prime Minister in accordance with the Constitution, reports Xinhua news agency. Sabri is scheduled to be sworn in on Saturday, the statement added. His appointment comes as Malaysia is mired in a political turmoil despite a dire situation caused by the Covid-19 pandemic. Malaysia saw a new record high of daily cases for the third consecutive day with 23,564 reported on Friday, bringing the national total to 1,513,024. "His Majesty expressed his view with the appointment of the Prime Minister, the government must continue its efforts to combat the Covid-19 pandemic immediately for the benefit and security of the people and the well-being of the country, which is greatly affected by the crisis and the threat caused by the pandemic," the national palace said in the statement. "His Majesty expressed the hope that with the appointment of the new Prime Minister, the political crisis can be ended immediately and all MPs can set aside their political agenda to unite and unanimously work to address the pandemic in the interest of the people and the country," it said. Sabri is succeeding Muhyiddin Yassin, who resigned on Monday after losing majority support in Parliament. Sabri, 61, is the vice president of the United Malays National Organization (UMNO) and had served in Muhyiddin's cabinet as Defence Minister before being appointed as Deputy Prime Minister in July. He has received backing from his own party UMNO and other parties in Muhyiddin's government, which gave him the simple majority in the lower house. However, Sabri might not have much "honeymoon" on his new post as he would face an immediate task to consolidate his power and form a cabinet which is capable of handling the pandemic and the economic hardship. With an identical political coalition of Muhyiddin's, Sabri came to power with a slim majority and this poses challenges for him to enjoy a stable government, political analysts said. Muhyiddin was forced to resign after about a dozen of UMNO MPs withdrew their support. Political observer Azmi Hassan said the new prime minister will face pressure from his coalition partners as well as from his own party, with each competing to secure their interest. He said the new prime minister needs to ensure that his cabinet appointments are made based on merit, and that he forms a capable cabinet. "Ismail Sabri needs to demonstrate that he will design his cabinet not according to the party hierarchy but according to capabilities," he said. /IANS

Bangalore win toss and elect to bat first against Kolkata
[Abu Dhabi: Virat Kohli,captain of Royal Challengers Bangalore, walks back to the pavilion after getting out during match 31 of the Vivo Indian Premie

'Too funny'; Yuvraj tags Flintoff in a meme dedicated to his six sixes vs England

New Delhi, Sep 19 : This day, fourteen years ago, former Indian cricketer Yuvraj Singh scripted history by smashing six sixes in an over off English seamer Stuart Broad in the inaugural edition of the […]

With Dalit CM in Punjab, Congress aims at UP and Uttarakhand

New Delhi, Sep 19 : After the surprise announcement of the name of Charanjit Singh Channi, a Dalit leader, for the Chief Minister's post in Punjab, the Congress looks at the larger aim of Uttrakhand a […]

Amaravati, Sep 19 : Andhra Pradesh's ruling YSR Congress Party (YSRCP) is heading for a clean sweep in the ZPTC and MPTC elections as the counting of votes was underway on Sunday. The party had […]