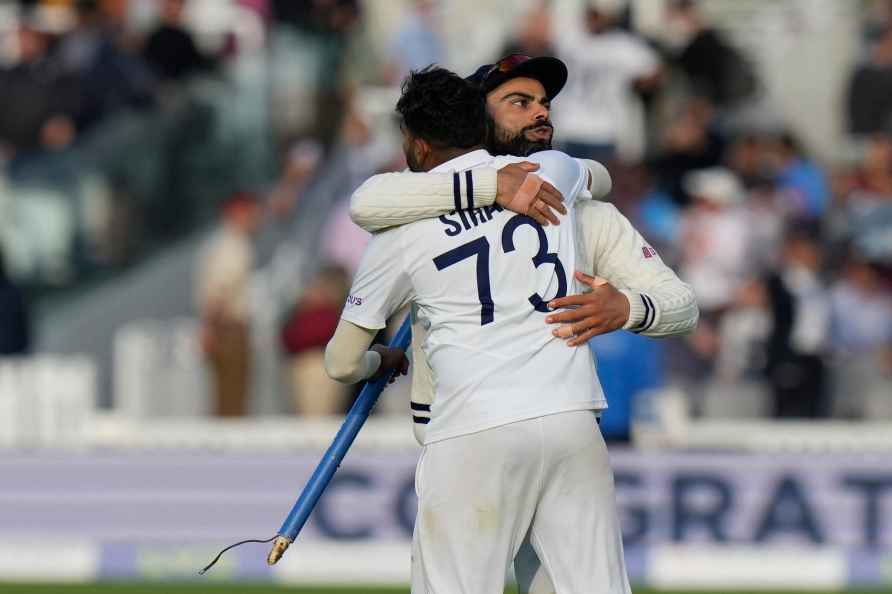 London, Aug 20 : The Test series between India and England, which went without incident in the first Test, has got added spice after the second Test as India pulled off a 151-run sensational win amid heated exchanges between Indian and English players. Barmy Army, a club of England cricket supporters who follow the team everywhere around the world, has released a video which shows an altercation between Indian skipper Virat Kohli, who was batting, and England pace bowler James Anderson. The incident happened during the fourth day's play in India's second innings. "This is pure theatre and we are only 2 matches in [emoticon: hushed face]. Test match cricket, never change," tweeted England's Barmy Army from its twitter handle. According to the video, Kohli got offended after Anderson had apparently said something. "What was that? Huh?," asked Kohli. "Swearing at me again? Like Jasprit? Huh?" Anderson responded, "You can swear at me all you want. No one else can." Kohli then said, "You play by your own rules. You're calling me a fucking prick for running too? This isn't your backyard!" The 39-year-old England pacer said, "I think bowlers can run through the crease too." Kohli then sealed the conversation saying, "Yeah, yeah, yeah.. chirp, chirp, chirp. This is what old age makes you do." Relations between the two teams soured towards the end of third day's play, when Bumrah bowled a series of short deliveries at No. 11 Anderson. According to India fielding coach R Sridhar, the veteran English player did not respond to Bumrah's apologies after the end of day's play. "After the innings, the boys were walking back to the dressing room. Bumrah walked past Jimmy and patted at him, so as to tell him that it wasn't intentional. Bumrah had gone to talk to him and end the matter, but Jimmy brushed him aside," said Sridhar. "That got the team together. Not that the team wasn't together before. It sparked/ignited a fire in everyone. The effect of that was visible on day 5," explained Sridhar. /IANS

Bangalore win toss and elect to bat first against Kolkata
[Abu Dhabi: Virat Kohli,captain of Royal Challengers Bangalore, walks back to the pavilion after getting out during match 31 of the Vivo Indian Premie