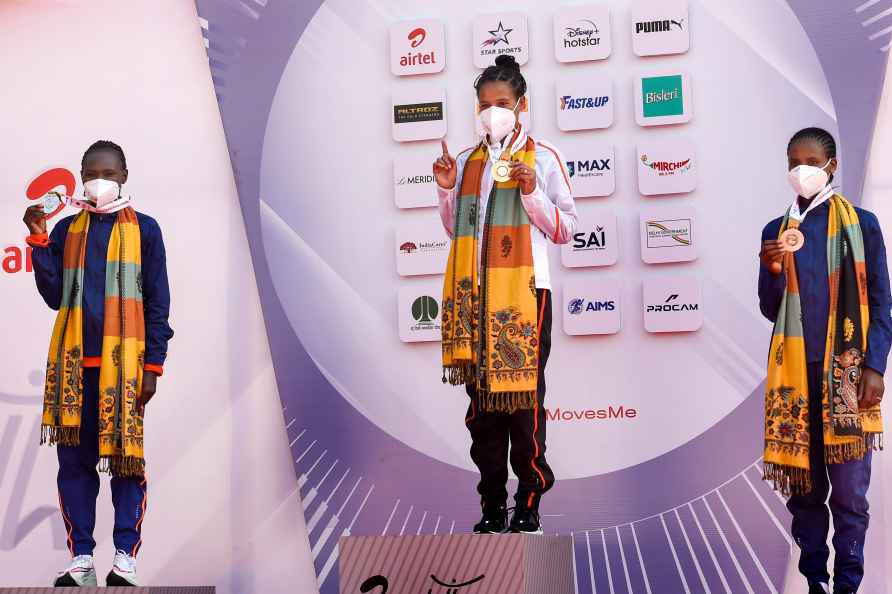 New Delhi, Aug 4 : Rahul Gandhi on Wednesday congratulated Boxer Lovlina Borgohain for winning a bronze medal at the Tokyo Olympics. In a tweet Rahul Gandhi said," Congratulations to Boxer#LovlinaBorgohain! You've done the country proud #DaughtersOfIndia." Boxer Lovlina Borgohain became the third Indian athlete at the Tokyo Olympics after weightlifter Mirabai Chanu and shuttler P.V. Sindhu, to clinch a medal. Lovlina won a bronze after she lost her welterweight semifinal bout to Turkey's Busenaz Surmeneli at the Ryogoku Kokugikan Arena on Wednesday. India have now bettered their 2016 Rio Olympic Games tally by clinching a silver and two bronze in Tokyo. The 23-year-old from Golaghat district of Assam lost her 64/69kg category last-four bout in a unanimous decision to Busenaz, who is among the best in the business and is ranked No. 1. Lovlina also became the third boxer to win a medal at the Olympics for India after Vijender Singh and MC Mary Kom's bronze at the 2008 and 2012 Olympics respectively. Lovlina had already assured India of its first boxing medal from the Tokyo Olympics when she defeated former world champion and fourth seed Chen Nien-Chin of Chinese Taipei 4-1 in the quarterfinals. Earlier, she had beaten Germany's Nadine Apetz 3-2 in the pre-quarterfinals /IANS

Odisha scripting golden history in the field of sports
By Biswa Bhusan Mohapatra Bhubaneswar, Sep 5 : Today, if someone talks about sports especially hockey in India, perhaps he/she will not forget to me

How Odisha is emerging as sports hub of India
By Biswa Bhusan Mohapatra Bhubaneswar, Sep 5 : Today, if someone talks about sports especially hockey in India, perhaps he/she will not forget to me

San Francisco, Sep 5 : Tech giant Google is working on a "Human Presence Sensor" (HPS) for upcoming Chromebooks, which could be used for face unlock or other long-awaited Chrome OS features. Ear […]

Shamli (Uttar Pradesh), Sep 5 : A 48-year-old man has been sentenced to life imprisonment by a court for raping his daughter, 15, during lockdown last year. Additional sessions judge (ADJ) Mumta […]

Venice: Penelope Cruz poses for photographers upon arrival at the...

Venice: Penelope Cruz poses for photographers upon arrival at the premiere of the film 'Official Competition' during the 78th edition of the Venice Film Festival in Venice, Italy, Saturday, Sep, 4, 20 […]

London, Sep 5 : Hollywood star Tom Cruise had a rare copy of the film 'Top Gun: Maverick' in the car, which got stolen last month in Birmingham while he was shooting for 'Mission: Impossible'. B […]