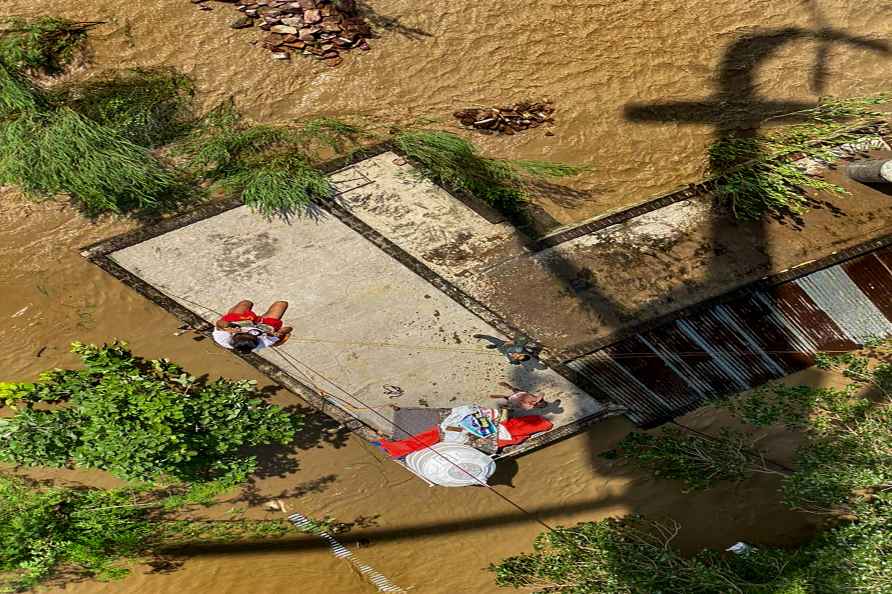 [**EDS: TWITTER IMAGE POSTED BY @IAF_MCC ON WEDNESDAY, AUG 4, 2021.** Datia: An aerial view of the people stranded on the roof of a temple at a flooded area near Seondha in Datia district. IAF rescued 46 people during a rescue operation. ( /PTI] Kolkata, Aug 4 : With the flood situation turning grim in at least seven districts of West Bengal, Chief Minister Mamata Banerjee, who went to Howrah district to conduct a preliminary survey of the situation on Wednesday, complained to Prime Minister Narendra Modi that the flood situation has aggravated in the state because of the excessive release of water by the Damodar Valley Corporation (DVC). The allegations were raised during a phone call with the Prime Minister on Wednesday. Besides taking stock of the situation on the ground, Modi also took stock of the damages caused by the floods in the state, and promised Banerjee that the Centre would assist the state in alleviating the flood situation. Sources in the CMO said that Banerjee slammed the DVC dams for releasing excessive amount of water without consulting the state, causing flooding in several areas. The conversation between the two leaders lasted for about seven minutes. West Bengal Irrigation Minister Soumen Mahapatra had also hit out at the DVC on Tuesday, saying: "The DVC deliberately released so much water that it led to a flood-like situation. The Central government deliberately created this man-made flood situation in Bengal. We condemn such politics." Earlier, the Chief Minister had promised that she would conduct an aerial survey of the flood affected districts, particularly at Khanakul in Hooghly and Udaynarayanpur in Howrah district, but she had to cancel her trip to Khanakul because of the rough weather condition and visited only Udaynarayanpur by road. Speaking to the media, the Chief Minister termed the floods as 'man-made' and alleged, "There has been no dredging in the canals and naturally these canals are getting overflooded leading to this recurring flood in West Bengal. The DVC is also responsible for this because it is releasing more water than it had promised." Banerjee also asked the district administrations to take people to safer areas from beforehand. She asked the concerned officials to make every arrangement so that people don't suffer. Adding to the problem, the meteorological department has predicted heavy rains in the next two days which will aggravate the flood situation in the state. According to the Met department, heavy to very heavy rain (07-20 cm) is likely to occur at one or two places over Howrah, Hooghly, North 24 Parganas, South 24 Parganas, East Midnapore, West Midnapore, East Burdwan and West Burdwan districts of Gangetic West Bengal on Wednesday and Thursday, while heavy rain (7-11 cm) is likely to occur at one or two places over Kolkata, Bankura, Birbhum, Purulia and Jhargram districts of Gangetic West Bengal. Thunderstorms with lightning are likely to occur at one or two places over all the districts of West Bengal, the Met department said. Due to incessant rains coupled with the release of water by the DVC and the Durgapur Barrage, large parts of six districts of the state have been flooded, killing at least 15 people and displacing nearly three lakh others. Hooghly, Howrah and West Midnapore are among the worst-affected districts by the floods. In Hooghly district alone, nearly 79,000 people have been affected, while crops and livestock worth lakhs of rupees have been destroyed. "In Hooghly, around 345 villages are affected by the floods, and more than 34,000 hectares of crop area have been damaged. Around 1,159 houses have been damaged in the district. We are presently running 89 relief camps," said a district official. /IANS

Mumbai, Sep 3 : Actor and producer Nikhil Dwivedi, who'll be seen in the Netflix anthology 'Ankahi Kahaniya', says that director Saket Chaudhary is "annoyingly calm" on the sets. Nikhil is playi […]

Tirana, Sep 3 : Albanian Prime Minister Edi Rama announced on members of the new cabinet that will govern the country for a third term during the next four years. The ruling Socialist Party, led […]

United Nations, Sep 3 : The General Assembly has adopted a resolution to tackle sexual exploitation and abuse throughout the UN system. The resolution, which was adopted on Thursday without a vo […]

Mumbai, Sep 3 : Celebrated Punjabi singer-rapper-lyricist Sidhu Moose Wala is all set to make his debut in film titled 'Moosa Jatt'. The first song of the film 'Jailaan' is released now. The son […]