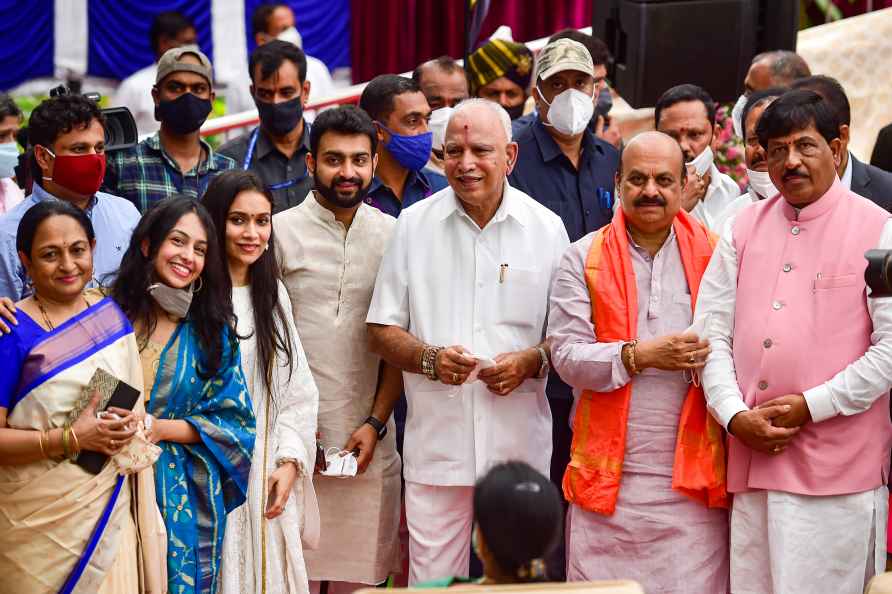 Bengaluru, Aug 4 : Karnataka Chief Minister Basavaraj Bommai on Wednesday said that the BJP high command is taking decisions on a few issues regarding the cabinet formation. "The issues will be sorted and a decision will be taken by the high command soon. I am expecting a call from New Delhi soon. Then, the list of ministers will be sent to the Raj Bhavan. "I will make personal calls to the selected candidates," Bommai told reporters at Vidhana Soudha. He said the 'BJP is a national party and discussions are imperative'. Sources said that the issue of giving a cabinet post to former Chief Minister B.S. Yediyurappa's son B.Y. Vijayendra is being discussed by the high command. /IANS

IYC prez among 40 arrested in Goa for staging protest
Panaji, Sep 7 : National president of the Indian Youth Congress B.V. Srinivas was on Tuesday arrested along with top Youth and Goa Congress office bea

Palestine calls on Israel to present peace program
Ramallah, Sep 7 : Palestinian Prime Minister Mohammed Ishtaye has called on the Israeli government to present a peace program for realising a "two-sta

Mumbai, Sep 7 : Singer-composer Akull and Aastha Gill have collaborated for a new romantic single titled 'Soulmate' which was released on Tuesday. 'Soulmate' is a love song that is an ode to the […]

Farhan Akhtar: Am aware I don't have a conventional playback singer's voice

Mumbai, Sep 7 : Actor-filmmaker Farhan Akhtar says that he is well aware of the fact that he does not have a conventional voice of a playback singer and that is why he does not do playback on film for […]

IYC prez among 40 arrested in Goa for staging protest

Panaji, Sep 7 : National president of the Indian Youth Congress B.V. Srinivas was on Tuesday arrested along with top Youth and Goa Congress office bearers, after they were lathi charged just before th […]