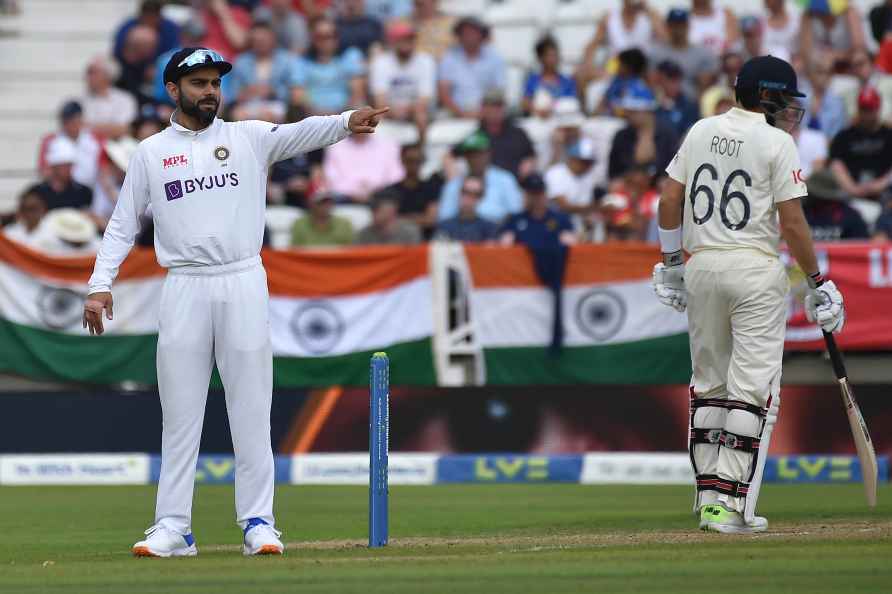 [Nottingham: India's captain Virat Kohli, left, gestures to his fielders during the first day of first test cricket match between England and India, at Trent Bridge in Nottingham, Wednesday, Aug. 4, 2021. On the right is England captain Joe Root. /PTI] Nottingham, Aug 4 : Even as rain threatens to disrupt proceedings in the first Test between India and England here at Trent Bridge, the first day was greeted with bright sunshine on Wednesday and a pitch that can be termed deceptive with its green tinge. Former West Indies pace bowler Michael Holding said ahead of the toss that though the bowlers would be pleased with the grassy layer on the pitch, the dry surface beneath the grass would mean that the ball would come easily onto the bat. "The pitch looks excellent if you are a bowler. A lot of grass, 10mm, and you have to dig it away to see the soil. But it is dry underneath and the ball should come onto the bat nicely. The batsmen shouldn't be too worried either. I, as a captain, would want to bat and get some runs on the board," said Holding during the pitch report. That is exactly what England captain Joe Root did. He won the toss and elected to bat. Both teams have gone in with pace-heavy attack. England have not included any spinner and hope Root and Daniel Lawrence would roll their arms over with off-spin. India have included left-arm spinner Ravindra Jadeja and benched off-spinner R Ashwin. Jadeja makes it due to his all-round capability. The Test is open to full capacity crowd and although the teams will be in bio-bubble, the venue is expected to see plenty of Indian fan following. Trent Bridge has been a good hunting ground for India in Test matches in recent times. In the last four visits to the venue, India have won twice, lost once and drawn once. India's wins came in 2007, when pace bowler Zaheer Khan powered the team to a seven-wicket win with a nine-wicket haul, and in 2018, when skipper Virat Kohli scored 97 and 103 to lead them to a 203-run win. India lost in 2011 by 319 runs on a miserable tour but drew the series opener here in 2014. /IANS

New York, Sep 3 : World No. 1 Novak Djokovic of Serbia moved closer to completing his Grand Slam dream by dismissing Dutchman Tallon Griekspoor 6-2, 6-3, 6-2 in the second round of the US Open. […]

Auckland, Sep 3 : A man was shot dead by New Zealand police on Friday after assaulting at least six people at a supermarket in Auckland city and the incident has been termed by Prime Minister Jacinda […]

Kabul/New Delhi, Sep 3 : The Taliban have claimed advances in Panjshir as they captured the centre of Shutul district along with 11 outposts held by opposition forces. Inamullah Samangani, a mem […]