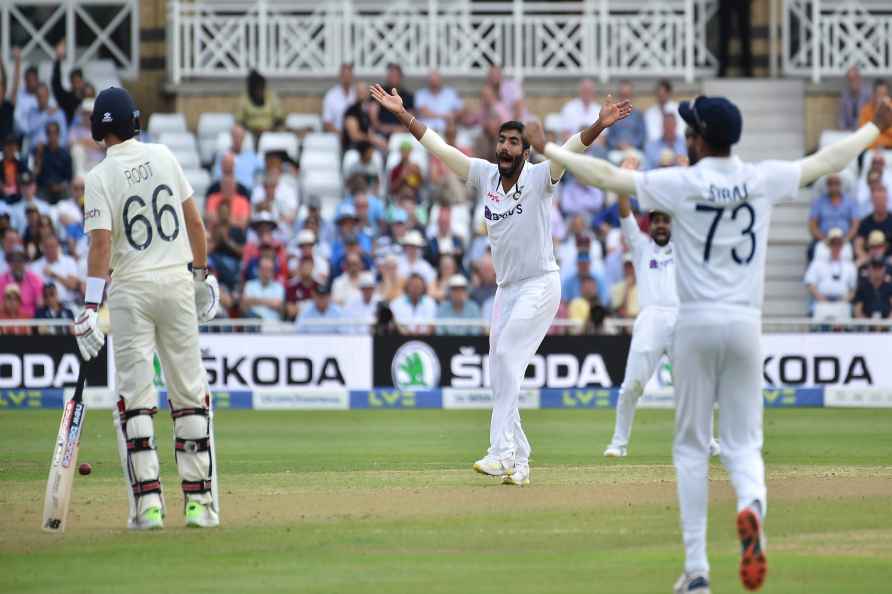 [Nottingham: India's Jasprit Bumrah., center, appeals unsuccessfully for the wicket of England's Dom Sibley during the first day of first test cricket match between England and India, at Trent Bridge in Nottingham, Wednesday, Aug. 4, 2021. /PTI] Nottingham, Aug 4 : India picked two wickets in the first session as England went to lunch at 61/2 on the first day of first Test here at the Trent Bridge on Wednesday. Jasprit Bumrah removed opener Rory Burns early, in the first over, while Bumrah's fellow pacer Mohammed Siraj got the wicket of No. 3 Zak Crawley for 27. India had wasted a review on Crawley in the 21st over when a ball from Mohammed Siraj hit the batsman's pads and went to the wicketkeeper even as the Indian skipper Virat Kohli thought the batsman had edged it and asked the appeal to be referred to the TV umpire. On the last ball of that over, another appeal was turned down but wicketkeeper Rishabh Pant was adamant and forced Kohli to review again. Crawley had to go back after replays showed the ball edged his bat before hitting his pad. Captain Joe Root (12 not out) and Dominic Sibley (18 not out) were unbeaten at the break. Brief scores: England 61/2 at lunch (Z Crawley 27, J Bumrah 1/16, M Siraj 1/22) vs India. /IANS

Auckland, Sep 3 : A man was shot dead by New Zealand police on Friday after assaulting at least six people at a supermarket in Auckland city and the incident has been termed by Prime Minister Jacinda […]

Kabul/New Delhi, Sep 3 : The Taliban have claimed advances in Panjshir as they captured the centre of Shutul district along with 11 outposts held by opposition forces. Inamullah Samangani, a mem […]