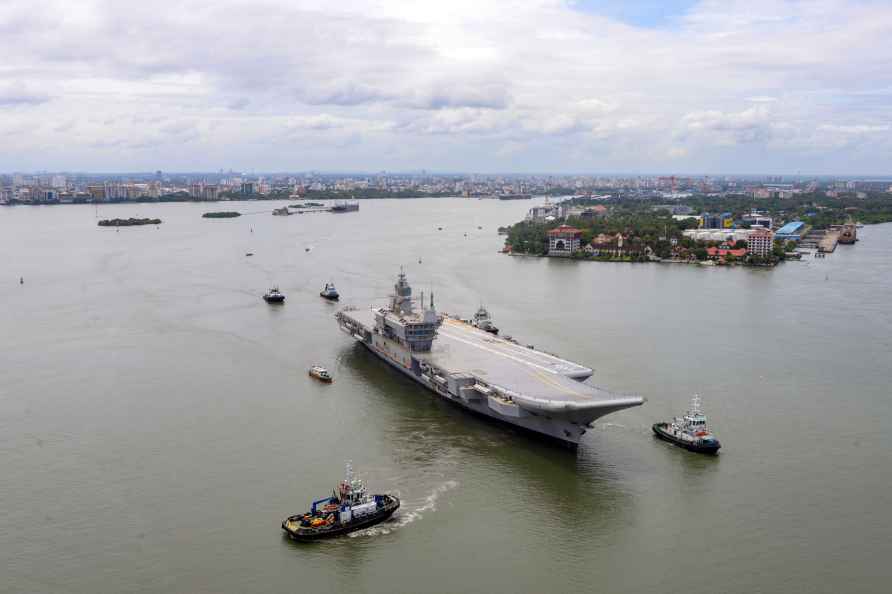 [**EDS: HO IMAGE PROVIDED BY INDIAN NAVY** Kochi: India?s maiden Indigenous Aircraft Carrier (IAC) ?Vikrant?, built by Cochin Shipyard Ltd., sets off for sea trials off Kochi, Wednesday, Aug 4, 2021. ( /PTI] Kochi, Aug 4 : INS Vikrant, also known as Indigenous Aircraft Carrier 1 (IAC-1), sailed out on Wednesday for its maiden trial into the Arabian Sea which will go on for four days. The aircraft carrier has been constructed by the Cochin Shipyard Limited for the Indian Navy, On board includes close to 1,500 officials, including officers and sailors. The highlight of this warship is that it is the first aircraft carrier to be built in the country. Work on the ship's design began in 1999, and the keel was laid in February 2009. The carrier was floated out of its dry dock on December 29, 2011 and was launched on August 12, 2013. The basic trials were completed in December 2020. The length of the ship is 262 m, while its beam is 62 m and has a depth of 25.6 m. /IANS

Kabul, Sep 4 : The fate of Afghanistan's Panjshir Valley - the final holdout against Taliban control - hangs in the balance as heavy fighting continues. Even as the Taliban claimed that it has taken " […]

Bhubaneswar, Sep 4 : The Odisha police has detained an editor of a local news portal for allegedly defaming athlete Dutee Chand by publishing "defamatory and obscene contents". The Mahila police […]

NIA files chargesheet against an IS terrorist

Bengaluru, Sep 4 : The National Investigation Agency (NIA) has filed a supplementary chargesheet against an Islamic State (IS) terrorist in the Al-Hind module case at NIA Special Court here. The […]

Washington, Sep 4 : US President Joe Biden on Friday signed an executive order directing his government to review and release some documents related to the FBI's investigation into the September 11, 2 […]