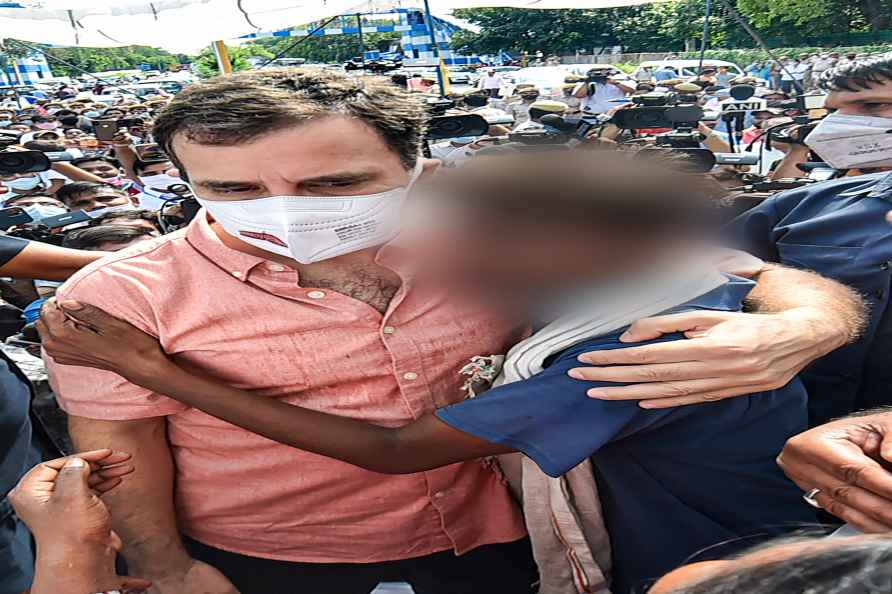 [New Delhi: Congress leader Rahul Gandhi meets the family members of the minor girl who was allegedly raped and then murdered in Delhi cantt area, in New Delhi, Wednesday, August 4, 2021. ( /PTI] New Delhi, Aug 4 : Congress leader Rahul Gandhi on Wednesday met the family members of 9-year-old victim who was raped and killed and demanded justice for them. The minor girl was allegedly raped, murdered, and cremated without her parents' consent in Old Nangal crematorium recently. Rahul Gandhi said, "the family wants justice and I am with them." The Congress has upped up the ante on the issue alleging apathy by Delhi police and the Delhi government. On Tuesday, Congress MP Shakti Singh Gohil had given notice in the Rajya Sabha on the issue and Delhi Congress workers had staged protests. The Delhi Police have arrested four persons on charges of raping and killing the nine-year-old girl and then cremating the body at a village crematorium near Delhi Cantonment on Sunday evening, the police said. The four accused persons, including a priest, allegedly cremated the body of the girl without her parents' consent or informing the police. The matter surfaced after the victim's family staged a protest along with the local people on Sunday night. The police said that the accused persons told the victim's mother that the child was electrocuted to death. They even told the girl's family members that if matter reaches the police, the body will be sent for autopsy, and the doctors will take out her vital organs and sell them. The four arrested persons have been identified as Radhey Shyam, the 55-year-old priest of the crematorium, Salim, Laxmi Narayan and Kuldeep, said Ingit Pratap Singh, DCP, South West Delhi. /IANS

Kabul, Sep 4 : The fate of Afghanistan's Panjshir Valley - the final holdout against Taliban control - hangs in the balance as heavy fighting continues. Even as the Taliban claimed that it has taken " […]

Bhubaneswar, Sep 4 : The Odisha police has detained an editor of a local news portal for allegedly defaming athlete Dutee Chand by publishing "defamatory and obscene contents". The Mahila police […]