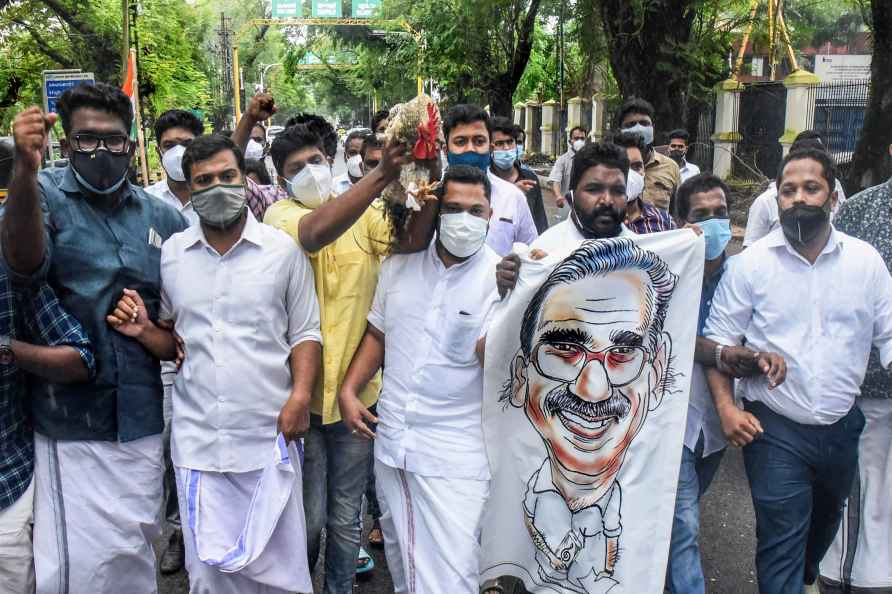 [Kochi: Youth Congress activists participate in a protest rally demanding resignation of Forest Minister A K Shashindran, in Kochi, Thursday, July 22, 2021. Saseenndran has been accused of trying to settle a sexual harassment case involving a party member in Kollam. ( /PTI] Thiruvananthapuram, July 22 : On expected lines, Chief Minister Pinarayi Vijayan appears to have given full support on the floor of the Kerala Assembly on Thursday to the beleaguered Forest Minister A.K. Saseendran who courted controversy after a phone conversation between him and a party member surfaced, even as the Congress-led Opposition strongly pressed for the resignation of the Minister. In the conversation, the NCP leader and Minister Saseendran asks his party member to settle amicably a case, which involves his daughter who was harassed by another party leader in Kollam. Moving a motion for an adjournment motion, Congress legislator P.C. Vishnunath, in whose constituency - Kundara falls where the victim resides, said all the big talk of Vijayan's government giving huge importance to women and their rights, the very action of him supporting Saseendran clearly shows all this talk is just humbug. "It took 22 days for the local police to register an FIR and till date the police has not even taken the statement of the victim. This shows the talk of Women's rights by Vijayan and his government is nothing but a bluff. In the voice clip it's very clear that Saseendran who knew what he was doing was to hush up the case and yet Vijayan says the Minister knew nothing," said Vishnunath. "Last week we all saw even Kerala Governor Arif Mohammed Khan undertaking a fast to protect the Women's rights and see what you (Vijayan) are doing. The Minister is saying to the victim's father to nicely settle the case and on the other hand he says he did not know the case. How can this happen? Vijayan should either ask for his resignation or dismiss him," added Vishnunath. But Vijayan said he has already asked the State Police chief to probe why there was a delay in registering an FIR. "The Governor's fast need not be seen lightly and what the Opposition is doing is to link the fast and the present case of the tiff between two leaders of the NCP. All what the Minister did was to interfere in an issue between two leaders of his party. He has done no wrong," said Vijayan. Unhappy with the response, Leader of Opposition V.D. Satheesan expressed concern that a Minister intervenes in a cognisable offence case and Vijayan is trying to shield the Minister. "Vijayan and his CPI-M party speak all the time of Women's rights and when in this case a Minister intervenes, Vijayan is shielding the Minister. We wish to find out if it's the job of a Minister to settle such cases. The police failed to do anything for 22 days because there was tremendous pressure from the higher ups and Vijayan said Saseendran has done no wrong. Anyone who hears the audio clip will understand that Saseendran is asking the victim's father to settle the case nicely," said Satheesan. When Speaker M.B. Rajesh denied leave for the adjournment motion, the entire Opposition walked out of the house. /IANS

[Kochi: Youth Congress activists participate in a protest rally demanding resignation of Forest Minister A K Shashindran, in Kochi, Thursday, July 22, 2021. Saseenndran has been accused of trying to […]

Plane crash-lands in Somalia with over 40 passengers onboard

Mogadishu, July 21 : A plane carrying over 40 passengers crash-landed into a military base in Gedo region of Somalia on Wednesday, officials said. Officials said the passengers were evacuated sa […]

A state of super-emergency has been imposed by Centre; all impartial institutions politicised: Mamata Banerjee on Pegasus issue.

A state of super-emergency has been imposed by Centre; all impartial institutions politicised: Mamata Banerjee on Pegasus issue. […]