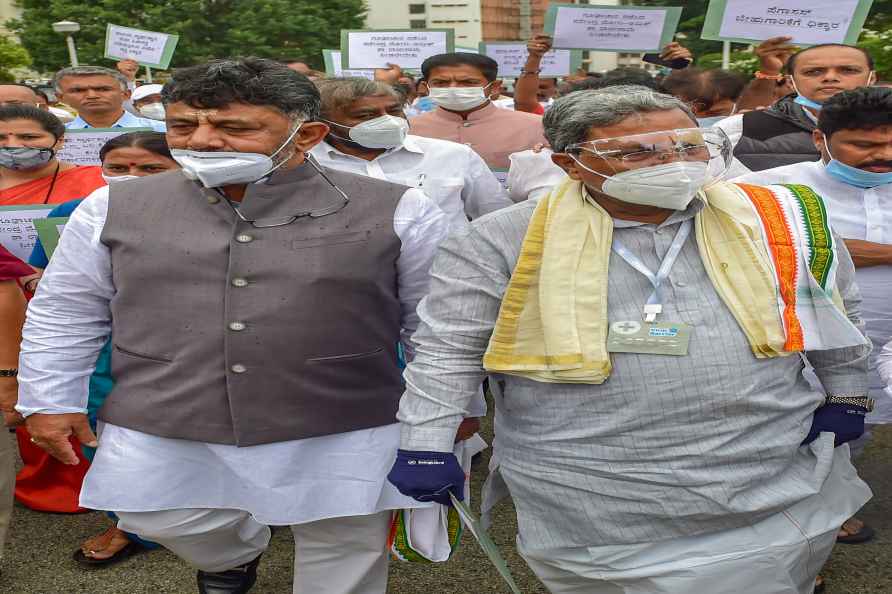 [Bengaluru: KPCC President DK Shivakumar and former Karnataka chief minister Siddaramaiah, during a protest march against the central government over an alleged surveillance operation using the Pegasus spyware, in Bengaluru, Thursday, July 22, 2021. ( /PTI] Bengaluru, July 22 : Amid talks of change of leadership in Karnataka, chief minister B.S. Yediyurappa has postponed the dinner party, to he held on July 25 for the party legislators and senior leaders. Earlier, he had also cancelled a BJP legislators meeting scheduled on the same day to celebrate the completion of two years in office. Sources in the party said that the decision to call off the dinner party was taken in the backdrop of talk of change of leadership in the state. It is also thought that many legislators would refrain from attending the dinner party and change of leadership issue dominates the occasion of celebration of two years by the BJP government under the leadership of Yediurappa. The Karnataka chief minister has also cancelled programmes organized in his home district, Shivamogga. Meanwhile, he is expected to take major decisions at the state cabinet meeting on Thursday evening. It is said that Yediyurappa is now mentally prepared to give in to the pressure of the high command. Though, major Veerashaiva-Lingayat seers' delegation are parading to his official residence for two days, he is conveying the message to them that he should follow what party asks him to do. Yediyurappa did not talk much during the interactions with seers and he is not even talking to the media. His appeal on Twitter to the followers not to indulge in protests at any political eventuality has sealed the fact that he is on exit mode and it is to be seen when this is going to happen. Yediyurappa had visited Delhi last week, and had met Prime Minister Narendra Modi, Home Minister Amit Shah, Defence Minister Rajnath Singh and BJP president J.P. Nadda. His Delhi trip had triggered speculations that he is on the way out and the party central leadership is working on a succession plan. /IANS

CAA, NRC will not harm Muslims: RSS Chief
[Tripoli: This photo provided by the International Organization for Migration shows migrants from four boats being returned to the shore in Tripoli, L

Kohima, July 21 : In a significant political development, Nagaland is heading for an all-party government, as the opposition Naga People's Front (NPF) is most likely to join the People's Democratic Al […]

Farmers have come to Jantar Mantar to prove to govt they aren't fools; UK parliament debating our issues, but not our govt: Yogendra Yadav.

Farmers have come to Jantar Mantar to prove to govt they aren't fools; UK parliament debating our issues, but not our govt: Yogendra Yadav. […]

We have the best chance of winning more medals in Tokyo: Satheesha Rai

By MK Ashoka Bengaluru, July 21 : Arjuna awardee weightlifter Satheesha Rai, who came up with his second-best performance at the 1996 Atlanta Olympics, says that the Indian contingent in Tokyo has […]