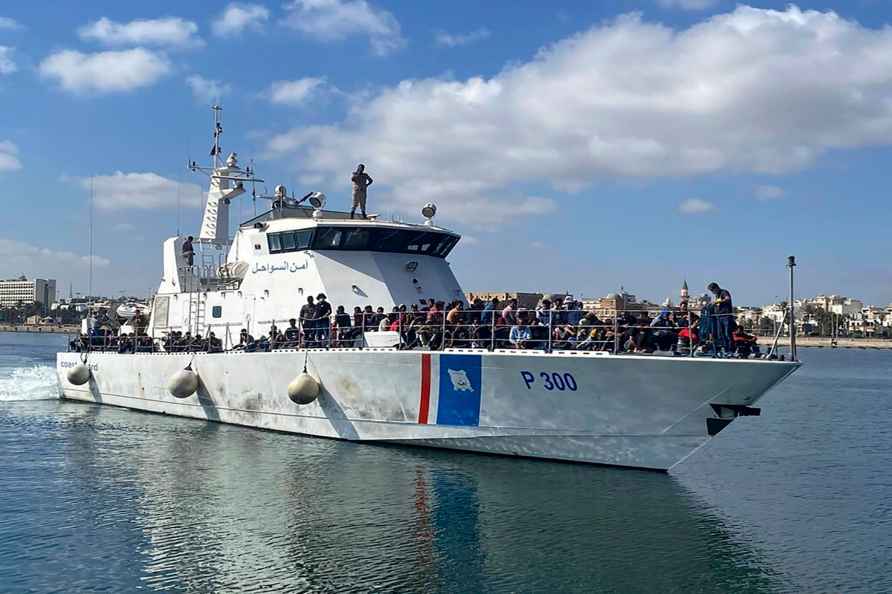 [Tripoli: This photo provided by the International Organization for Migration shows migrants from four boats being returned to the shore in Tripoli, Libya, Wednesday, July 21, 2021. Libya's coast guard intercepted Wednesday four boats in the Mediterranean Sea carrying migrants trying to reach Europe, a U.N. official said. According to the migrants, 20 people from one of the vessels had gone overboard earlier in the day and were presumed to have drowned. /PTI] Guwahati, July 21 : Rashtriya Swayamsevak Sangh (RSS) Chief Mohan Bhagwat, who is on a three-day visit to Assam, on Wednesday said the Citizenship Amendment Act (CAA) and the National Register of Citizens (NRC) would not harm the Muslims in any way. He said the CAA and the NRC have nothing to do with a Hindu-Muslim divide and a communal narrative around these issues is being spread by a section of people to for their political ends. Bhagwat, who arrived in Guwahati on Tuesday evening, said not a single Muslim would face any loss due to the new Citizenship Act. "Since 1930 there have been organised plans to increase the Muslim population not in connection with terrorism and economy but to become a dominant force. It happened in Punjab, Bengal and Assam. There are plans to turn these areas into their majority so that things work on their own terms. This happened in Pakistan and Bangladesh. Still we want assimilation and want to live together," the RSS Chief said after launching a book titled 'Citizenship debate over NRC and CAA: Assam and the Politics of History'. The book has been authored by Guwahati University Professor Nani Gopal Mahanta and was released at a function at the famous Srimanta Sankardev International Auditorium, Kalakshetra in Guwahati. Assam Chief Minister Himanta Biswa Sarma also spoke in the function. "After the partition we have taken care of our minorities even though Pakistan did not do it. NRC is only a process to find out who is a genuine citizen, nothing else. The matter (NRC) is in the government domain. A section of people want to get political mileage by creating a communal narrative involving both the NRC and CAA," Bhagwat said. "Since the Mahabharat period, Assam has had a history of migration but never so much fear from illegal influx. Assimilation of all communities should take place but there should not be any fear among other communities," he said. Advocating the need for "Akhand Bharat" (undivided India), the RSS Chief said countries such as Pakistan which broke away from India are now in distress. "Akhand Bharat is needed for the welfare of the universe. India has the ability to overcome several challenges and the world looks towards it to overcome those challenges and difficulties. With "Vasudhaiva Kutumbakam" (world is one family) belief, India can again put forward happiness and peace in the world." Bhagwat said, "When we talk about "Akhand Bharat" our aim is not to achieve it with power but to unite through 'Dharma' (policy) that is 'Sanatan' (eternal), that is humanity and this is called as Hindu dharma." RSS sources said during his stay in Guwahati, Bhagwat will hold meetings with senior RSS leaders in different parts of Assam and other north-eastern states, including Arunachal Pradesh, Manipur and Tripura. This is Bhagwat's first visit to Assam after the Bharatiya Janata Party-led government returned to power for the second consecutive term in the north-eastern state after winning the 2021 Assembly polls. /IANS

CAA, NRC will not harm Muslims: RSS Chief
[Tripoli: This photo provided by the International Organization for Migration shows migrants from four boats being returned to the shore in Tripoli, L

New Covid cases in Tokyo surge to 1,832, most since Jan 16
[Brussels: Belgium's Crown Princess Elisabeth marches with cadets of the military school as they march by the Royal tribune during the National Day pa

Saas-bahu pairs that redefined the relationship on TV

Mumbai, July 21 : The 'saas-bahu jodi' is what spices up daily soaps. Here are some of the jodis that fans have loved in the past for the way they redefined the relationship on the Indian television s […]

[Tripoli: This photo provided by the International Organization for Migration shows migrants from four boats being returned to the shore in Tripoli, Libya, Wednesday, July 21, 2021. Libya's coast guar […]

Bengaluru, July 21 : Karnataka has become the first state in the country to provide one per cent reservation for the 'transgender' community in all the government services. The government submitted a […]