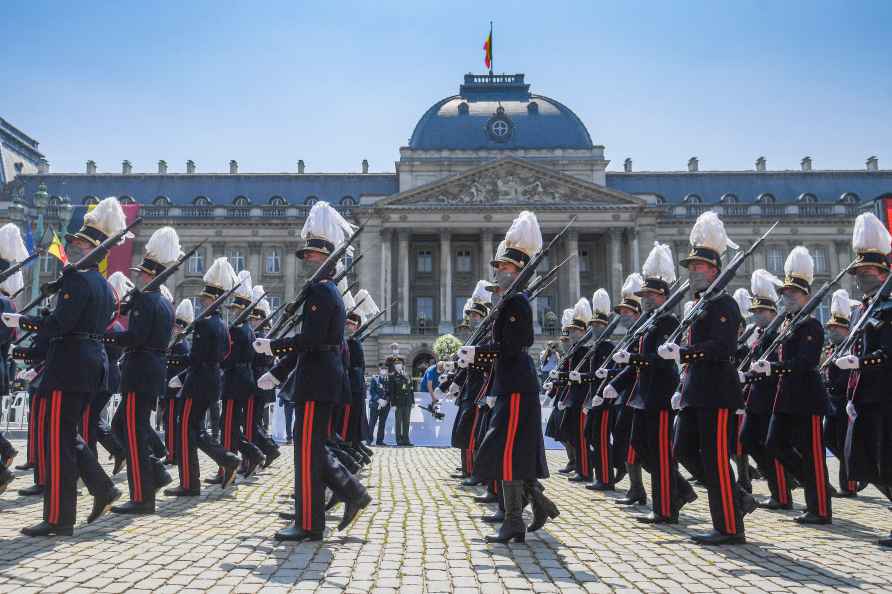 [Brussels: Belgium's Crown Princess Elisabeth marches with cadets of the military school as they march by the Royal tribune during the National Day parade in Brussels, Wednesday, July 21, 2021. Belgium celebrates its National Day on Wednesday in a scaled down version due to coronavirus, COVID-19 measures. /PTI] Tokyo, July 21 : Tokyo reported 1,832 new Covid-19 cases on Wednesday, rising by nearly 700 and surpassing the week-before figure for the 32nd consecutive day. The latest figure in Tokyo was the most since January 16, and the sixth highest daily tally ever recorded in the capital, The Japan Times reported. Wednesday's total surged from the 1,149 cases reported a week before as infections continue to rise in Tokyo. Daily new infections in the capital averaged 1,277.6 in the week to Wednesday, compared with 823.3 the previous week. It was also the most the capital has ever reported on a Wednesday. The number of people severely ill with Covid-19 under the metropolitan government's criteria rose by four, to 64, from a day earlier. The capital also reported four coronavirus-linked deaths. Elsewhere, Okinawa Prefecture confirmed 169 cases and four deaths, while Hokkaido reported 118 infections and Hyogo Prefecture reported 120 cases. Experts say Japan appears to be experiencing a fifth wave of infections as new cases increase ahead of the opening of the Tokyo Olympics on Friday. Health experts warned on Wednesday of a possible "critical" coronavirus situation in Tokyo, as they estimated infections could surge even further in early August during the Olympics. The experts advising the Tokyo Metropolitan Government said the seven-day moving average of new infections in the capital could reach 2,600 per day as of August 3 if the virus continues to spread at the current pace, a worse scenario than in the third wave that swept across Tokyo in the winter. On Tuesday, new infections totalled 3,758 nationwide, with Covid-19 fatalities coming to 20. The number of severely ill patients, meanwhile rose by 14 to 406. /IANS

New Covid cases in Tokyo surge to 1,832, most since Jan 16
[Brussels: Belgium's Crown Princess Elisabeth marches with cadets of the military school as they march by the Royal tribune during the National Day pa

[Brussels: Belgium's Crown Princess Elisabeth marches with cadets of the military school as they march by the Royal tribune during the National Day parade in Brussels, Wednesday, July 21, 2021. Belgiu […]

Sonia calls Punjab MPs to work together to win poll

New Delhi, July 19 : After party MPs from Punjab had sought an appointment with her, Congress chief Sonia Gandhi called all the lawmakers and asked them to work together in the state to win next year' […]

Batsman Iyer ruled out of one-day tournament in England

New Delhi, July 19 : Batsman Shreyas Iyer has been ruled out of the Royal London One-Day Cup, where he was supposed to represent Lancashire. "Following discussions between the Club and the BCCI, […]