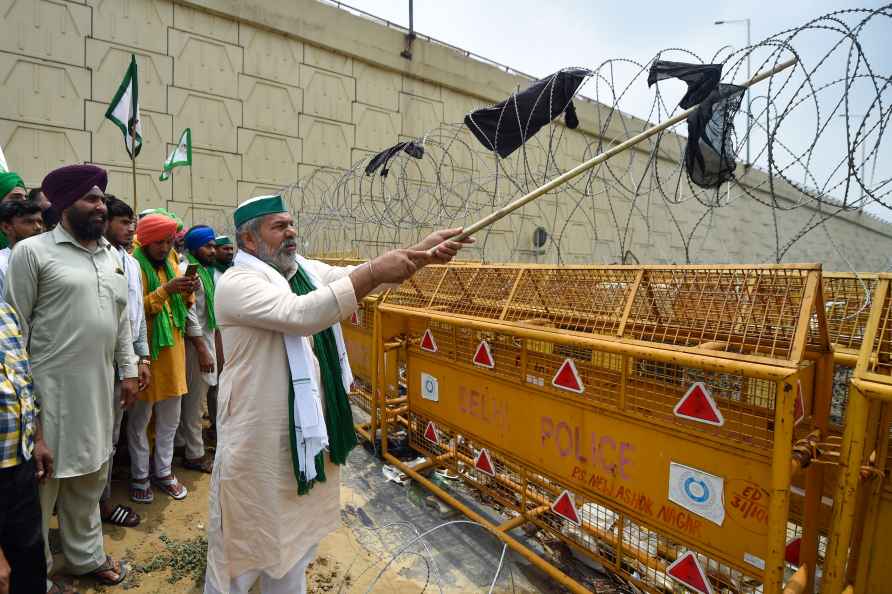 [New Delhi: BKU spokesperson Rakesh Tikait and farmers during their protest against three farm reform laws, at Ghazipur border in New Delhi, Wednesday, July 21, 2021. Farmers are scheduled to protest march towards Parliament against three farm laws on Thursday. ( /PTI] New Delhi, July 21 : The security at Jantar Mantar road in the national capital has been beefed up by Delhi police as scores of farmers are scheduled to hold a protest there against the three Union farm laws on Thursday. Delhi Special Commissioner of Police (Crime), Satish Golcha, and Joint Commissioner of Police, Jaspal Singh, visited Jantar Mantar to review security ahead of the farmers organisations gathering at the spot. However, Delhi police said, "It has not given written permission to the farmers so far to gather near Parliament." But the Delhi government has granted permission to farmers to stage a protest at Jantar Mantar on Thursday, sources said. The farmers have been protesting against three Union farm laws, for the last eight months at the Singhu, Tikri and Ghazipur borders of Delhi. They are demanding the repeal of the farm laws enacted in September 2020 and have said they will hold a 'Kisan Parliament' at Jantar Mantar from July 22. The farmers organisations leading the protests at the Singhu border have decided that 200 protesting farmers will assemble at Jantar Mantar every day from Thursday. "We will hold Kisan Parliament from July 22 till the Monsoon Session of Parliament ends and 200 protesters will go to Jantar Mantar every day. One speaker and one deputy speaker will be chosen every day. In the first two days there will be discussion over the APMC Act. Later, the other bills will also be discussed every two days," the farmer leaders said on Tuesday. They had held a meeting with Delhi police officials on Tuesday, after which a farmer leader said they will hold peaceful demonstrations at Jantar Mantar and no protester will go to Parliament. The protest will take place at Jantar Mantar from 10 a.m. to 5 p.m. "When police asked us to reduce the number of protesters, we told them to focus on the law and order situation and also gave an assurance that the protest will be peaceful," said Rashtriya Kisan Mazdoor Mahasangh National President Shiv Kumar Kakka. The Monsoon Session of Parliament started on Monday and is scheduled to conclude on August 13. /IANS

Patna, July 19 : Bihar Chief Minister Nitish Kumar on Monday angrily reacted to Shiv Sena leader Sanjay Raut's call for the BJP to withdraw support from his government. Raut, who is also the edi […]

New Delhi, July 19 : Head of the Taliban, Mawlawi Hibatullah Akhundzada, in his message on the occasion of Eid has assured all regional countries that the Taliban fighters will not allow anyone to use […]