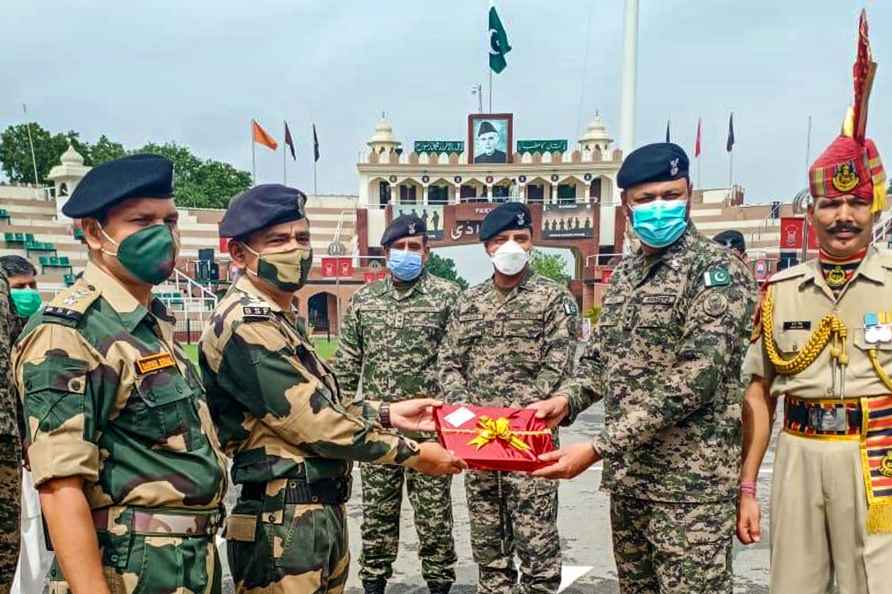 [Attari: BSF and Pakistan Rangers exchange sweets on the occasion of Eid al-Adha at Attari Wagha Border, Wednesday, July 21, 2021. ( /PTI] New Delhi, July 21 : On the occasion of Eid, India and Pakistan armies held a flag meeting and exchanged sweets at the Line of Control in Jammu and Kashmir on Wednesday. The Indian Army says that it was done as "a gesture for promoting Peace, Harmony and Compassion in the true spirit of the festival". Armies of both the countries exchanged sweets at Kaman Aman Setu, Uri and Tithwal Crossing on Kishanganga River in Tangdhar and Kupwara. The armies also exchanged sweets at Poonch-Rawalakot Crossing Point and Mendhar-Hotspring Crossing Point in Poonch district. The event has been held when both the Armies have been strictly following the Ceasefire Agreement on the Line of Control. The ceremony is seen as an enhanced confidence building measure in the backdrop of ongoing ceasefire between both the countries Also at international border, the troops of Border Security Force and men of Pakistan Rangers greeted each other and exchanged sweets. The troops met at Hiranager, Samba, Ramgarh, RS Pura, Arnia and Pargwal Sectors of International Border of Jammu. A BSF spokesperson said that exchange of sweets also took place at joint check post at Attari in Punjab's Amritsar district. The force looks after around 2,290 kilometer International Border between two countries that runs north to south from Jammu, Punjab, Rajasthan up to Gujarat. /IANS

**EDS: HANDOUT PHOTO MADE AVAILABLE FROM CMO (WB) ON WEDNESDAY, ...

**EDS: HANDOUT PHOTO MADE AVAILABLE FROM CMO (WB) ON WEDNESDAY, JULY 21, 2021.** New Delhi: NCP President Sharad Pawar and other senior leaders during a gathering to observe Martyr's Day at Constituti […]

**EDS: HANDOUT PHOTO MADE AVAILABLE FROM PIB ON WEDNESDAY, JULY ...

Chennai/New Delhi, July 19 : President Ram Nath Kovind will chair the centenary celebration of the Tamil Nadu Assembly which was established in 1921, and also unveil the portrait of former Chief Minis […]