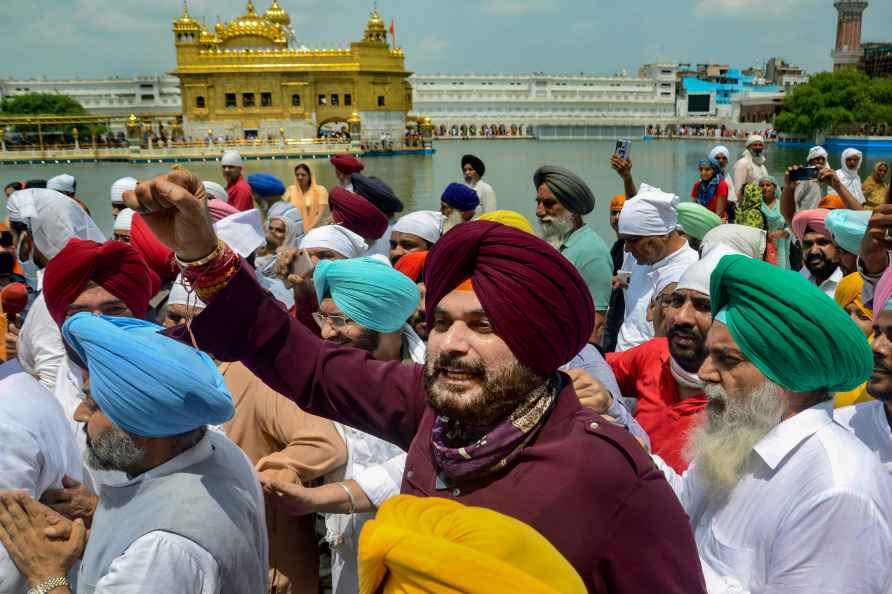 [Amritsar: Newly appointed Punjab Pradesh Congress Committee President Navjot Singh Sidhu along with party leaders, offers prayers at Golden temple in Amritsar, Wednesday, July 21, 2021. ( /PTI] Amritsar, July 21 : In a first show of solidarity after his name was announced as the state party chief, Punjab Congress unit President Navjot Singh Sidhu, accompanying 62 legislators, comprising many state Cabinet ministers, on Wednesday paid obeisance at the Golden Temple, here. However, Chief Minister Amarinder Singh, who is upset with Sidhu over his purported remarks against his government over the power crisis and the sacrilege issue, and his close confidants, were conspicuously absent from Sidhu's maiden visit to his constituency and religious places in the city after assuming the charge as the state chief. However, past state President Sunil Jakhar was accompanying cricketer-turned politician Sidhu. Sidhu will assume the new charge on Friday. After paying obeisance at the Golden Temple, Sidhu and the legislators will be visiting the Durgiana Mandir and Ram Tirath Sthal, both prominent Hindu sites. Earlier in the day, the 62 Congress MLAs gathered at Sidhu's residence here and reached the Golden Temple complex in two chartered luxury buses. On reaching the Golden Temple, they were given a warm welcome by the party functionaries. The MLAs present included Raja Warring, Raaj Kumar Verka, Inderbir Bolaria, Barinder Dhillon, Madan Lal Jalapuri, Harminder Gill, Harjot Kamal, Harminder Jassi, Joginder Pal and Pargat Singh. The Cabinet ministers included Sukhjinder Singh Randhawa, Charanjit Channi and Tript Rajinder Singh Bajwa. The party high command has also appointed four legislators Sangat Singh Gilzian, Sukhwinder Singh Danny, Kuljit Singh Nagra and Pawan Goel as working presidents of the party. They were accompanying the party chief during his visit. Toughening his stance, Chief Minister Amarinder Singh on Tuesday clarified that he won't meet Sidhu till he publicly apologised to him. "Reports of @sherryontop seeking time to meet @capt_amarinder are totally false," Chief Minister's media advisor Raveen Thukral said in a tweet. "No time has been sought whatsoever. No change in stance...CM won't meet #NavjotSinghSidhu till he publicly apologises for his personally derogatory social media attacks against him," he added. Also Cabinet minister Brahm Mohindra welcomed the appointment of Sidhu as the new state unit chief but ruled out a personal meeting with him till he resolves his issues with the Chief Minister. In a statement, Mohindra on Tuesday said the decision to appoint Sidhu had been taken by the high command and is welcome. "However, I will not meet him (Sidhu) till he meets the Chief Minister and resolves his issues with him," said Mohindra, adding that Amarinder Singh is the leader of the Congress Legislative Party and he is duty bound to follow him. An adamant Amarinder Singh, who is reportedly upset with Sidhu for targeting his government over the power crisis and the sacrilege issue, had categorically told state party in-charge Harish Rawat on July 17, a day before Sidhu's appointment, that there would be no rapprochement between the two until Sidhu apologises in public for his "derogatory tweets and interviews". /IANS

15 irrigation projects to be completed in next 2-3 yrs: Odisha CM

Bhubaneswar, July 19 : Odisha Chief Minister Naveen Patnaik on Monday said 15 irrigation projects in the state would be completed in the next 2-3 years. Patnaik said this while launching release […]