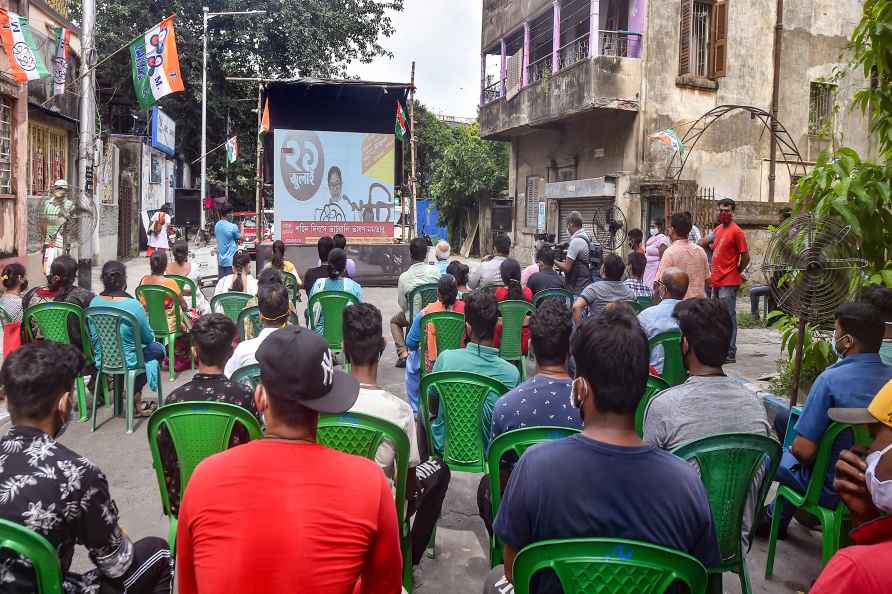 [Kolkata: TMC workers attend a virtual rally address by party supremo Mamata Banerjee to observe Martyr's day in Kolkata, Wednesday, July 21, 2021. Martyr's day is observed in memory of 13 Congress workers who were killed in police firing during an agitation against the then-ruling Left front Government in 1993. ( /PTI] By Shashi Bhushan New Delhi, July 21 : As West Bengal chief minister Mamata Banerjee is planning to go national on Martyrs' Day, state BJP chief Dilip Ghosh on Wednesday told IANS that it is a tradition in the state that when the government fails, the ruling party starts talking about expansion and national presence. Referring to Banerjee's plan for Trinamool Congress (TMC) expansion ahead of next general elections, Ghosh said, "She is trying it for long to make TMC a national party but she failed in all her previous attempts. West Bengal has a tradition that when the ruling party fails to govern, it starts trying to become a national party. CPI-M had done it when Jyoti Basu was the chief minister. Now, she is doing the same. It is not new, it is part of a tradition." Talking about CPI-M's attempt to make then chief minister Basu the Prime Minister, Ghosh said, "CPI-M had tried hard to make Jyoti Basu Prime Minister but it failed. (Harkishan Singh) Surjeet ji worked very hard for CPM's national role and to make its leader Prime Minister of the country. He had tea with someone on the breakfast table, lunch and dinner with others. But all the efforts failed then and now CPI-M's presence has reduced from three to just one state (Kerala) due to the BJP." Ghosh claimed that Banerjee is trying the same. "She had the same problem of failed governance like the CPI-M. She is trying to flee from her responsibility. West Bengal is witnessing a new peak of political violence, corruption and lakhs of people migrated from the state to earn their livelihood. To divert people's attention from these issues, Banerjee is talking about expansion and national role for herself," West Bengal BJP chief said. Mamata Banerjee observes July 21 as Martyrs' Day every year to remember the 13 persons who were killed at a Youth Congress rally in Kolkata in 1993. Eyeing the party's expansion, the TMC has decided to telecast Banerjee's address across West Bengal, and for the first time, also in other states like Tamil Nadu, Delhi, Punjab, Tripura and poll-bound Gujarat and Uttar Pradesh. After coming to power for a third term, the TMC has decided to spread its tentacles in other states to become a national party. The saffron party is staging a 'dharna' across West Bengal and the national capital on Wednesday to pay tribute to its workers killed in political violence. BJP MPs from West Bengal joined the dharna in Delhi under the leadership of Ghosh. /IANS

Kolkata: LOP West Bengal Assembly Suvendu Adhikari and family members of victims, pay tribute to the victims who lost their lives in a violence allegedly by TMC workers, during an event 'Shahid Sradha […]

New Delhi, July 19 : Close on the heels of media reports on the Pegasus project that some 300 Indians were targeted using spyware capable of extracting data from a phone, comes a riveting book that as […]