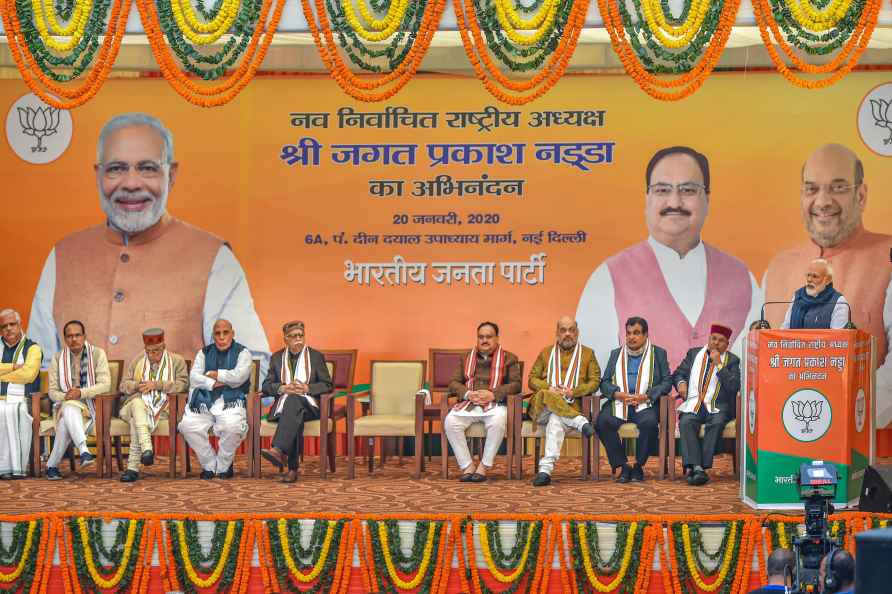 Lucknow, July 11 : Uttar Pradesh chief minister Yogi Adityanath has reaffirmed his position as numero uno in the state after the BJP won 635 seats out of 825 block pramukh seats. The victory is proof of the BJP's immense presence in rural Uttar Pradesh and will make it easier for the ruling party in the next year's assembly elections. Prime Minister Narendra Modi, BJP president J.P. Nadda, union ministers Amit Shah, Rajnath Singh, Nitin Gadkari were among those who took to Twitter to congratulate Yogi Adityanath on this 'unparalleled and stupendous' victory. Yogi Adityanath told reporters that it was a mandate for the policy of 'Sabka Saath, Sabka Vikas, Sabka Vishwas'. He said that it was also a stamp of approval on policies of the Centre and the state governments and a robust law and order situation in the state. "It was unlike in the previous regimes when anarchy prevailed and criminals held sway," he said. UP BJP president Swatantra Dev Singh said that the victory had established BJP as the leading political force from the villages to the national level. "It is a clear victory of the governance of Prime Minister Narendra Modi and chief minister Yogi Adityanath. There is no denying the fact that both the leaders are unparalleled and have immense public support," he said. According to reports, the BJP-supported candidates contested on 735 seats, while 14 seats were given to its ally Apna Dal (S). The party also gave an unannounced support to 76 candidates while agreeing not to field its officially supported candidates. As results trickled in on Saturday evening, BJP and its ally Apna Dal supported candidates were poised for a win on 635 seats. The Samajwadi Party backed candidates, according to reports, won in over 103 seats, while Congress supported candidates managed a win on just two seats. The independents won around 95 seats. A day ago, as many as 349 candidates were elected unopposed after 187 candidates took back their nomination papers on Friday. Polling for the remaining 476 seats was held on Saturday. Significantly, the block pramukh polling got marred by reports of violence and clashes between the BJP and the Samajwadi Party workers in various parts of the state. The Samajwadi Party, which was in direct contest with the BJP, accused the ruling party of resorting to misuse of government machinery. SP has announced a protest on July 15 against what it called "murder of democracy" by the BJP. /IANS

Germany set for change as Merkel generation sees its time end?
Berlin, Sep 27 : For a generation of Germans, Angela Merkel was the only Chancellor they knew but in the first election after she announced her decisi

Dubai, Sep 27 : Skipper Sanju Samson blasted 82 off 57 deliveries but Rajasthan Royals could manage only 21 runs off the last three overs losing two wickets as they managed to reach 164/5 in their 20 […]

Thiruvananthapuram, Sep 27 : Kerala on Monday logged 11,699 people turning Covid positive after only 80,372 samples - as in the norm for weekends - were tested in the past 24 hours. The test pos […]

Yadav says farmers have given befitting reply to govt

New Delhi, Sep 27 : Political activist and farmer leader Yogendra Yadav termed the Bharat Bandh (nationwide shutdown) observed on Monday a success and said that farmers have given a befitting reply to […]