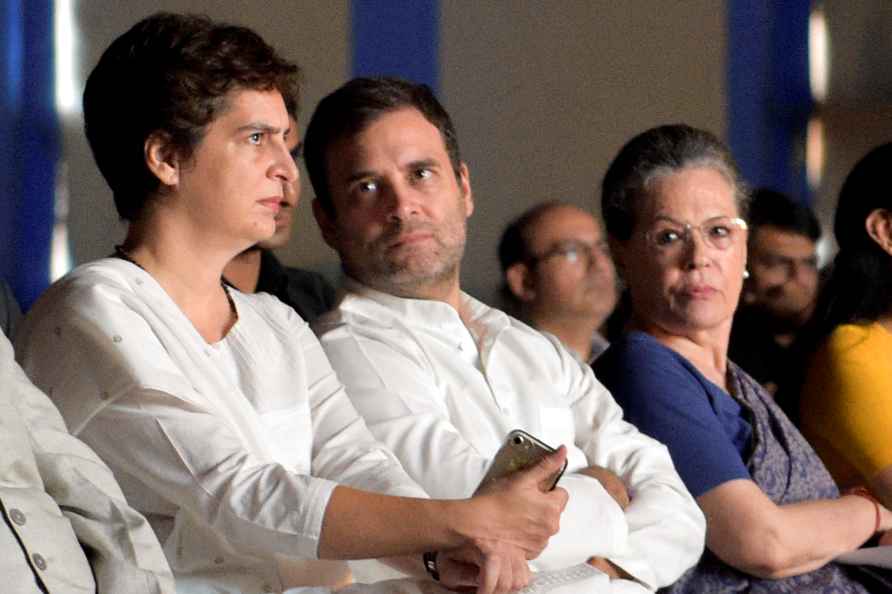 By Saiyed Moziz Imam Zaidi New Delhi, June 27 : After the demise of seasoned partyman Ahmed Patel last year, the Congress first family - the Gandhis - is finding it hard to find a suitable replacement for the man who provided heft to the party in everything from political manoeuvring to mustering support from alliance partners. In a crisis, Patel's was deemed to be the final word on party affairs. But since Rahul Gandhi started calling the shots again, he was marginalised. In his last days, he was made Congress treasurer. The much talked of AICC reshuffle could happen soon with a new team taking over the functioning of party affairs and many anticipate an enhanced roll for Priyanka Gandhi Vadra outside Uttar Pradesh. Nevertheless, partymen are waiting to see who would be the new pointsman to reach out to the Gandhis. At one time, V. George was one such pointsman. He worked with Rajiv Gandhi as private secretary and later with Sonia Gandhi but was sidelined after the emergence of Patel. George, along with Arjun Singh, M.L. Fotedar, Sheila Dikshit and Natwar Singh, was instrumental in persuading Sonia Gandhi to become party president in place of Sitaram Kesri, who was party chief at the time. Insiders in the party say current dissent in the party is due to lack of communication and consultation process on important issues. Of late, Sonia Gandhi has revived the mechanism and recently chaired the meeting on Jammu and Kashmir. Congress leaders say that George's return could be beneficial for the party and the Gandhis as he knows all about inner-party intrigue and could be the catalyst for running party affairs. He also knows the party's senior leadership since the days of Rajiv Gandhi and specially people who are unhappy with the functioning of the party. He can help reach out those and keep the Gandhis informed about the latest developments in the party and outside -- matters that are not in the public domain. From Jawaharlal Nehru to Indira Gandhi, who had Yashpal Kapoor and R.K. Dhawan, to Rajiv Gandhi who had V. George and later Sonia Gandhi, Congress presidents have had a history of working through personal staff but those were the days when the party was a strong force. It is a changed situation now. People working for Rahul Gandhi often show an ability to adopt a nuanced approach in public dealings and work like bureaucrats. It is important to take the middle path. In the current political scenario, Congressmen feel they have been left out of the party's plans. The issues raised by the so-called G-23, now reduced to 22, are relevant and have the silent approval of many. This is the weakness of Team Rahul which needs to sort out matters amicably and give timely advice to the leadership. Rahul Gandhi has been active on the Covid front and cornering and advising the government but politically the results were in vain as the recent election results were not encouraging for the party. Rahul has been active on the Punjab front as well and has been meeting people. But avoiding a meeting with the Chief Minister was considered bad optics and strategy. It is true that engaging with Punjab leaders was a good initiative but leaving out Rajasthan has not gone down well with the supporters of Sachin Pilot, say insiders. The return of V. George, if it happens, could end some of the problems related to communication gap in the party. /IANS

End of 'inclusiveness' in TN politics?
By Arun Lakshman Chennai, July 25 : When the Directorate of Vigilance and Anti-Corruption (DVAC) sleuths raided 21 premises, including the residenc

India must start competing, and not participating, in Olympics -- honestly
By Qaiser Mohammad Ali New Delhi, July 11 : When the Indian athletes, seeking to improve upon the six-medal haul bagged at the 2012 London Olympic G

Hyderabad, Aug 1 : Actress Mrunal Thakur, who will soon be seen with actor Dulquer Salmaan in their yet-to-be-titled trilingual film, revealed her look and character's name on Sunday. While Dulq […]

Wellington, Aug 1 : New Zealand reported four new imported cases of Covid-19, said the Ministry of Health in a statement on Sunday. The four new cases were recent returnees detected in managed i […]