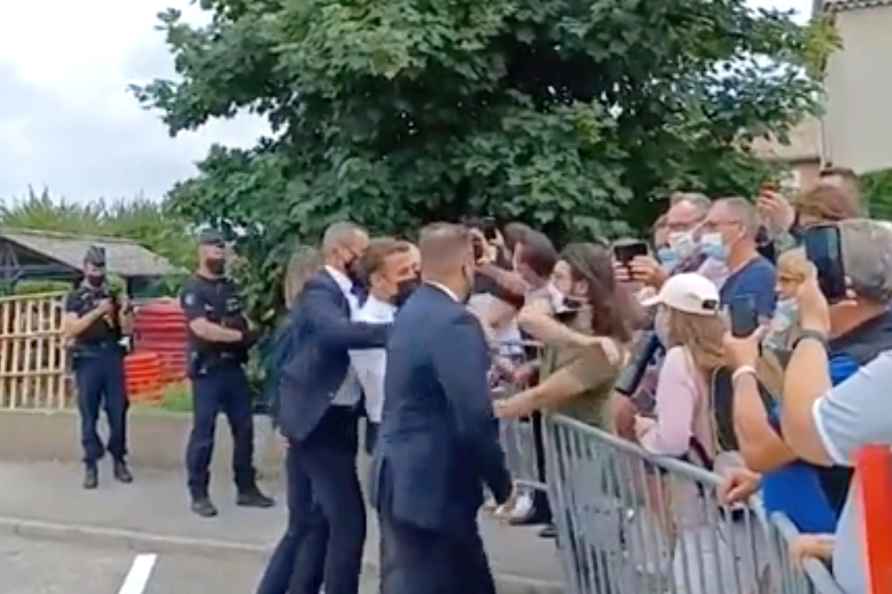 Paris, June 11 : A man who slapped French President Emmanuel Macron during a public event has been sentenced to 18 months in jail, but with 14 months of those as a suspended sentence. The 28-year-old was also banned from holding public office or possessing any weapons, television station BFMTV reported from the courtroom in Valence. Damien T slapped the 43-year-old president on Tuesday during a visit to Tain-l'Hermitage, south of Lyon. The incident caught on camera caused consternation throughout the country. The 28-year-old did not deny the act in court and, according to the TV station, said he was a victim of injustice, DPA news agency reported. Macron stands for the decline of France, the broadcaster quoted him as saying. Previously, he had also considered throwing an egg or a pie, he said. Macron talked about the incident in a TV interview on Thursday, stressing it was an "isolated act". He went on to talk about violence against women and comment on how there had been "moments of very high tension in our country," for example during the "Yellow Vest" protests. About a year before national elections, and less than two weeks before regional elections, Macron is on a tour through the country to meet voters. /IANS

Sharmila's entry not likely to have much impact on T'gana politics
Hyderabad, July 11 : A series of developments last week added some spice to the otherwise dull politics in Telangana which has been completely dominat

'It is very difficult to make people laugh': Priyadarshan

By Ahana Bhattacharya Mumbai, July 11 : Filmmaker Priyadarshan has given a series of comedy hits with Akshay Kumar, so when the box-office wizard and National Award winner confirms a new film with t […]

London: Kate, Duchess of Cambridge takes off her face mask as she sits in the Royal Box to watch the men's singles final between Serbia's Novak Djokovic and Italy's Matteo Berrettini on day thirteen o […]

Seoul, July 11 : Zynga, a US mobile gaming giant behind the hit title 'FarmVille,' sees room for growth in South Korea and the broader Asian market in its push for global expansion. Bernard Kim, […]