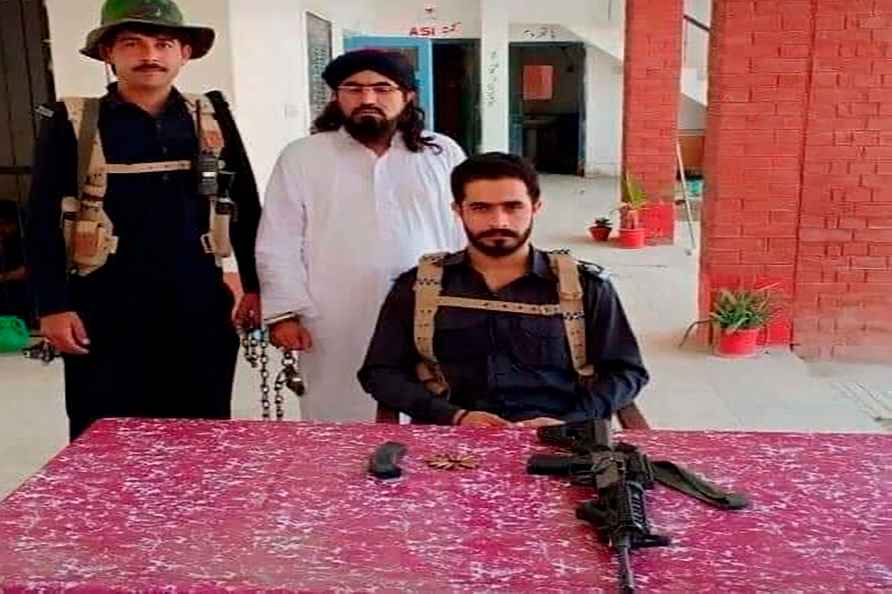 [Lakki Marwat : In this photo released by Police Department of Lakki Marwat, shows police officers pose for photograph with handcuffed a cleric Mufti Sardar Ali Haqqani, center, with confiscated weapon, who threatening to kill the Malala Yousafzai, after his arrest at a police station in Lakki Marwat, a district in the Pakistan's northwestern Khyber Pakhtunkhwa province, Thursday, June 10, 2021. Pakistani police have arrested cleric Haqqani after a video of him went viral on social media, in which he threatens Nobel Laureate Malala Yousafzai over her recent comments about marriage, officials said Thursday. /PTI] Chennai, June 10 : Indian-Made Foreign Liquor (IMFL) smuggling has been witnessing a rapid rise in Tamil Nadu since the closure of TASMAC outlets due to the enforcement of the Covid-induced lockdown. With the neighbouring Puducherry opening its liquor vends and shops, a heavy rush was seen at the outlets in Karaikal and Villupuram areas, bordering Tamil Nadu. The soaring number of IMFL smuggling cases is keeping the police on their toes. The Mylapore police on Wednesday arrested a 32-year-old man Kulandai Yesu, with 10 IMFL bottles. He works with a leading food aggregator. On being interrogated, Yesu admitted that he and three of his friends used to buy liquor from Karnataka and Puducherry and later sell it to their customers under the guise of delivering food at homes. In another such incident, the Tenkasi police arrested one Gnanamani, who was transporting 230 bottles of Karnataka Silver Cup Brandy in a car. The vehicle was seized by the police. Police have also seized 1,399 bottles of different varieties of IMFL brands at Salem city, Karuppur, which were smuggled to the state from Karnataka. The Salem City police intercepted and arrested one V. Subrathin, while another person Aakash, who was also in the same vehicle smuggling liquor bottles, fled the spot. The Pudukottai Prohibition Enforcement Wing seized 2,200 litres of arrack on June 9 in the Annavasal police station limits. Those who were involved in the illicit liquor trade escaped and the police later destroyed the seized bottles. Police have also nabbed three youths who were trying to smuggle liquor at Cuddalore, with around 140 IMFL bottles. With the arrest of people from different parts of Tamil Nadu, police and excise personnel have increased their vigilance for liquor smuggled from Andhra Pradesh, Puducherry and Karnataka. Another major issue the police are tackling is the illegal brewing of arrack in the rural areas of Tamil Nadu especially in the southern pockets of the state. Theni, Cumbum are under the lens of police and excise departments to curb the illegal sale of arrack in these areas. A source in Dindugal district told IANS on condition of anonymity: "Arrack is available secretly but it's very costly and 750 ml of arrack will cost you around Rs 1,450 to Rs 2,000." Deputy Superintendent of the Prohibition Enforcement Wing of the state police, R Purushothaman said, "The police is on constant vigil and are intercepting almost all the vehicles which cross into our state from Karnataka, Andhra Pradesh and Puducherry. Those behind liquor smuggling will not be spared." /IANS

Liquor smuggling on the rise in Tamil Nadu
[Lakki Marwat : In this photo released by Police Department of Lakki Marwat, shows police officers pose for photograph with handcuffed a cleric Mufti

Liquor smuggling on the rise in Tamil Nadu

Mumbai, June 9 : In a major initiative, the Maharashtra government has made the cumbersome process of vehicle registration process totally online - faceless and paperless - in view of the Covid-19 sec […]

New Delhi, June 9 : Delhi reported 337 new Covid cases and 36 deaths in the last 24 hours, according to the Delhi government's daily health bulletin. This is the second straight day that the nat […]