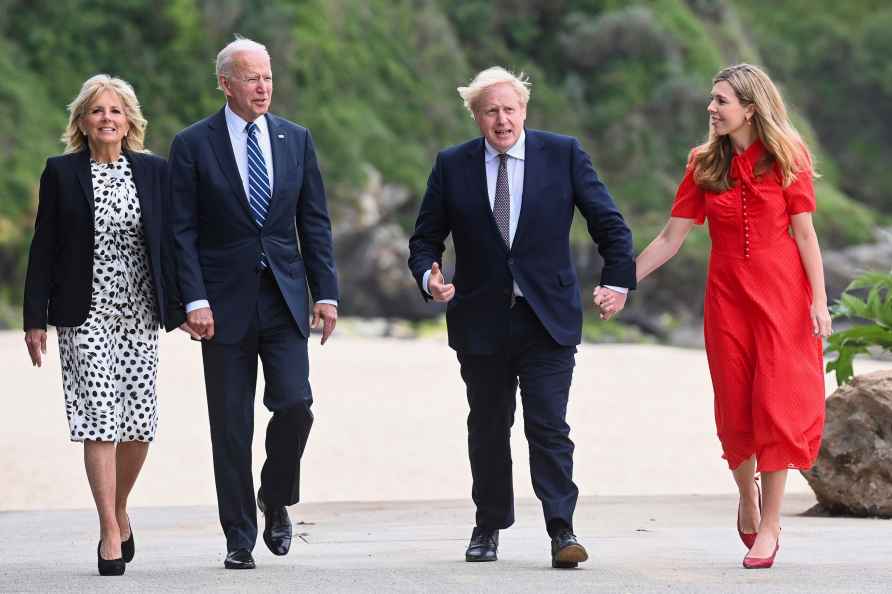 [Carbis Bay : Britain's Prime Minister Boris Johnson, his wife Carrie Johnson and U.S. President Joe Biden with first lady Jill Biden walk outside Carbis Bay Hotel, Carbis Bay, Cornwall, Britain, ahead of the G7 summit, Thursday June 10, 2021. /PTI] Washington, June 10 : Joe Biden arrived in Britain on Wednesday in his first foreign trip as US President, during which he is scheduled to visit several European countries. The president arrived at an air base of the Royal Air Force in eastern England, DPA reported citing a leading British media outlet. The president and First Lady Jill Biden are scheduled to meet US soldiers in the English county of Suffolk to kick off their first foreign trip since taking office in January. On Thursday, Biden is due to meet British Prime Minister Boris Johnson near Cornwall, where the G7 summit takes place from Friday to Sunday, on the fringes of which Biden is expected to meet German Chancellor Angela Merkel, among other G7 leaders. At the end of their visit to Britain, the US president and the first lady are to be received by Queen Elizabeth II at Windsor Castle near London on Sunday. On Monday, Biden plans to attend the NATO summit in Brussels, where a top-level meeting with EU representatives is scheduled for the following day. On Wednesday of next week, Biden is expected to hold an eagerly awaited summit with Russian President Vladimir Putin in Geneva before the US president returns to Washington. The White House said: "This trip will highlight America's commitment to rallying the world's democracies, coming together to shape the rules of the road for the 21st century, defend our values, and tackle the world's biggest challenges." /IANS

Biden arrives in Europe in 1st trip abroad as US President