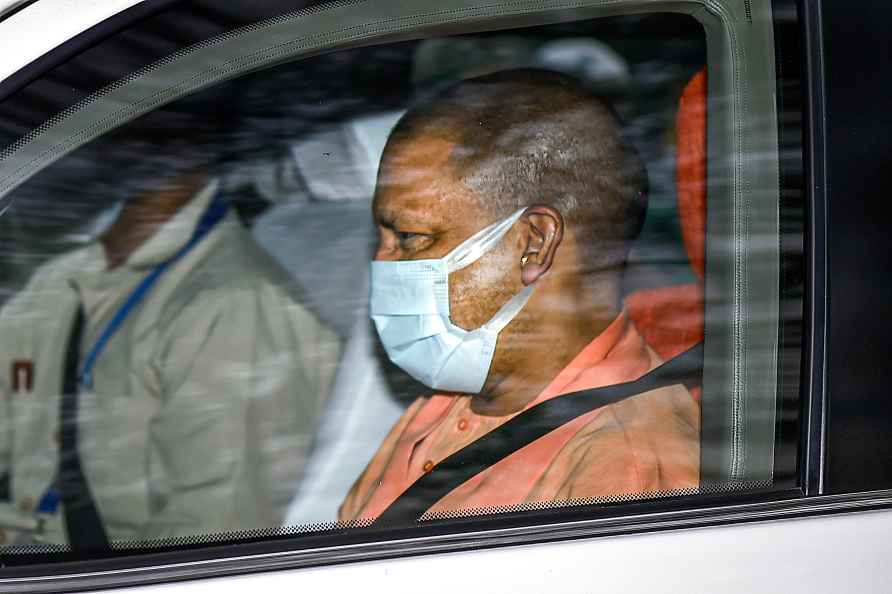 [New Delhi: Uttar Pradesh Chief Minister Yogi Adityanath leaves after meeting with Home Minister Amit Shah, in New Delhi, Thursday, June 10, 2021. ( /PTI] New Delhi, June 10 : Uttar Pradesh Chief Minister Yogi Adityanath reached the national capital on Thursday where he is likely to meet the BJP central leadership. Adityanath has reached Union Home Minister Amit Shah's residence for a meeting to discuss the political situation in Uttar Pradesh. The UP Chief Minister is expected to meet Prime Minister Narendra Modi on Friday morning before calling on BJP President J.P. Nadda in the afternoon, sources said. Preparations for next year's Assembly elections in Uttar Pradesh will be the main agenda of Adityanath's meeting with the party's central leadership, sources said. The sources also said that the handling of the Covid situation during the second wave of the pandemic by the Uttar Pradesh government is also likely to be discussed during the meetings. While the state's efforts drew flak from the opposition, the BJP leadership had appreciated the works done by the UP government. Adityanath's visit to New Delhi has fuelled speculation about the possible changes in the Uttar Pradesh cabinet and in the party structure ahead of next year's Assembly polls. "A possible cabinet expansion or reshuffle is also likely to be discussed in the meetings. Changes in the state BJP unit are also part of the agenda in order to strengthen the party ahead of next year's Assembly elections," a party insider said. Talks of changes are doing the rounds for the last fortnight ever since BJP national General Secretary (organisation) B.L. Santhosh and state in-charge Radha Mohan Singh visited Lucknow to review the party's preparations for next year's Assembly elections in Uttar Pradesh. Santhosh had taken feedback from the state ministers and MLAs, which had fuelled speculation about possible changes in the party's Uttar Pradesh set up. Sources claimed that based on the feedback collected by the central leadership, it has been decided to go for a reshuffle in the Uttar Pradesh government as well as in the party's state unit. The sources also said that the role of former Union minister Jitin Prasada, who jumped ship from the Congress to the BJP on Wednesday, will also be discussed during Adityanath's meetings with the central BJP leadership. A well-known Brahmin face in Uttar Pradesh, Prasada's father Jitendra Prasad was a prominent Brahmin leader in Uttar Pradesh. /IANS

Too much at stake in 2nd Test for England to lose focus: Hussain
[Birmingham: England's Rory Burns, right, and Dom Sibley run between the wickets to score during the first day of the second cricket test match betwee

NZ stand-in captain Latham eyes historic win at Edgbaston
[Birmingham: New Zealand players line up at the start of the first day of the second cricket test between England and New Zealand at Edgbaston in Birm

Yogi at Shah's residence, likely to meet PM and Nadda on Fri

New Delhi, June 9 : As economic activities have slowed down amid the second wave of Covid-19 and lockdowns across states, a Finance Ministry report has said that faster vaccine coverage and frontloadi […]