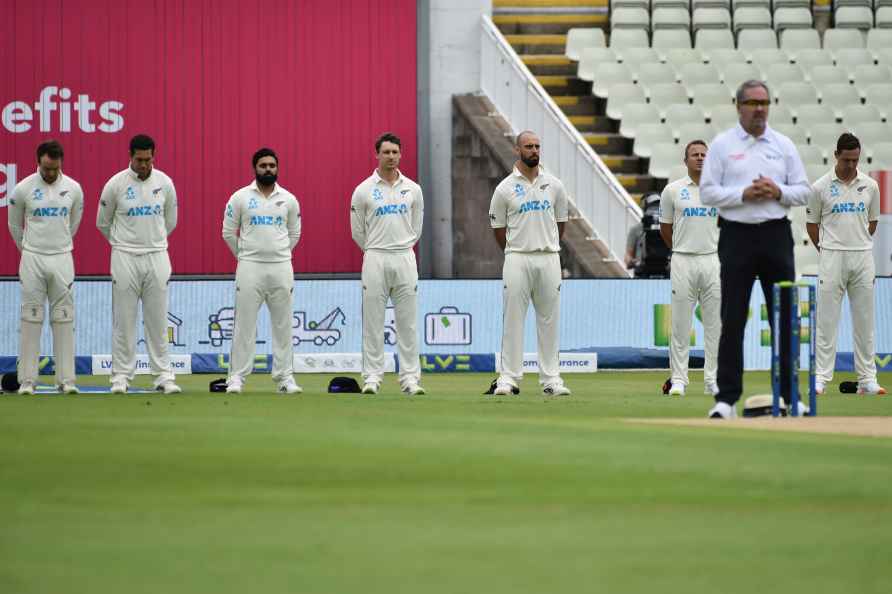 [Birmingham: New Zealand players line up at the start of the first day of the second cricket test between England and New Zealand at Edgbaston in Birmingham, England, Thursday, June 10, 2021. /PTI] Birmingham, June 10 : New Zealand's stand-in captain Tom Latham faces uphill task as he leads his team, later on Thursday, in the second Test against England at Edgbaston where they have lost all their previous four matches. The Kiwis have lost Tests at the venue in 1958, 1965, 1990 and 1999. Latham is leading the side after regular captain Kane Williamson was unavailable due to elbow niggle. If Latham's side is able to script a win, it will be only their third series win in 18 attempts and just their sixth win in 56 Tests, in England. "For me, it is just about trying to continue what this group has been doing over the last couple of years," Latham, who will captain Black Caps for only the third time, said ahead of the second Test. "We have had some really good results home and away and in different conditions and I certainly would not be coming in and changing things up too much. It is just a continuation of what the group has been doing and trying to stick to what we know works for us," added Latham. The 29-year-old had led the team twice before - in a loss to Australia in Sydney in January, 2020, and in a win over West Indies in Wellington in December, 2020. "It is a nice opportunity for me, and I am certainly looking forward to doing that over the next few days," added the left-handed opener, whose father Rod played for New Zealand in the 1990s. /IANS

NZ stand-in captain Latham eyes historic win at Edgbaston
[Birmingham: New Zealand players line up at the start of the first day of the second cricket test between England and New Zealand at Edgbaston in Birm

China-based hackers luring Indians into fake Tata Motors scam
[Moscow: In this photo provided by Russian Interior Ministry, a Russian police officer stands near the bus which crashed into a bus stop in the town o

[Birmingham: New Zealand players line up at the start of the first day of the second cricket test between England and New Zealand at Edgbaston in Birmingham, England, Thursday, June 10, 2021. /PTI] […]