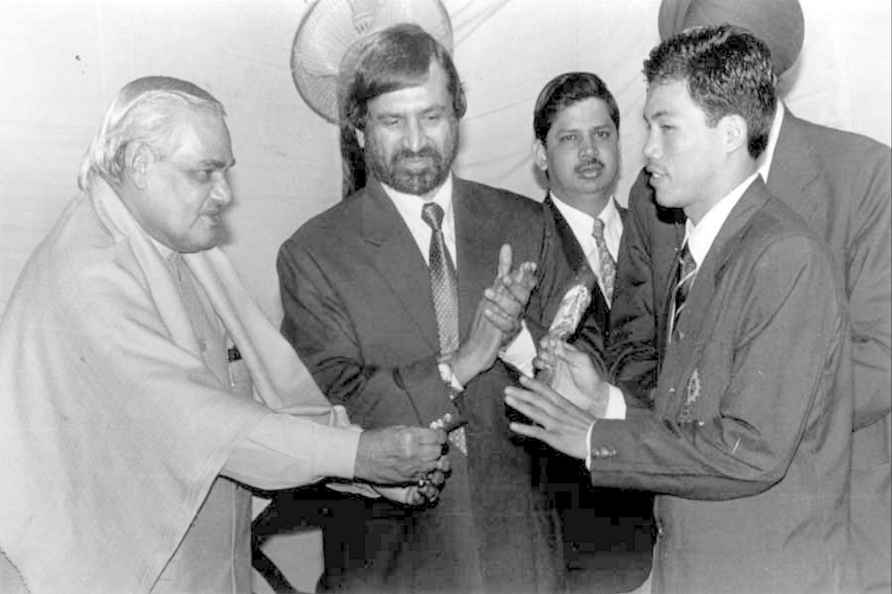 [**EDS: FILE PHOTO** New Delhi: In this file photo circa 1998, Former prime minister late AB Vajpayee greets boxer Dingko Singh. 1998 Asian Games gold medal-winning former boxer Dingko Singh died after a long battle with liver cancer, on Thursday, June 10, 2021. He was 42 and had been fighting the disease since 2017. ( /PTI] New Delhi, June 10 : N Dingko Singh, an Asian Games gold-medallist in boxing, passed away on Thursday in Imphal after losing his battle with liver cancer. He was 42. The Manipur boxer had won gold in bantamweight at the 1998 Bangkok Asian Games. Last year, he had tested positive for coronavirus. Though he recovered from Covid-19, he had to undergo radiation therapy for liver treatment in January 2020. He even had to sell his house for his treatment. An Arjuna awardee in 1998, he had been fighting liver cancer since 2018. He was also honoured with Padma Shri in 2013. Boxer Vijender Singh, the 2008 Beijing Olympic Games bronze-medallist, tweeted, "My sincerest condolences on this loss. May his life's journey & struggle forever remain a source [of] inspiration for the upcoming generations. I pray that the bereaved family finds the strength to overcome this period of grief & mourning [emoticon: folded hands] #dinkosingh." /IANS

First mega-monsoon tragedy as 11 killed in Mumbai house-crash
[Mumbai: Rescue operation underway after a single-storey house collapsed on another structure in Malwani area on Wednesday night, in Mumbai, Thursday,

New York, June 9 : Covid-19 produced more symptoms and complications than seasonal influenza in children, while death was rare among them, revealed a large new study. Early in the pandemic, opin […]

US Senate passes bill to counter China's policy on reincarnation

Dharamsala, June 9 : To counter the growing threat of China and to protect the religious freedom of Buddhists on Tibetan spiritual leader the Dalai Lama's reincarnation, the US Senate has overwhelming […]