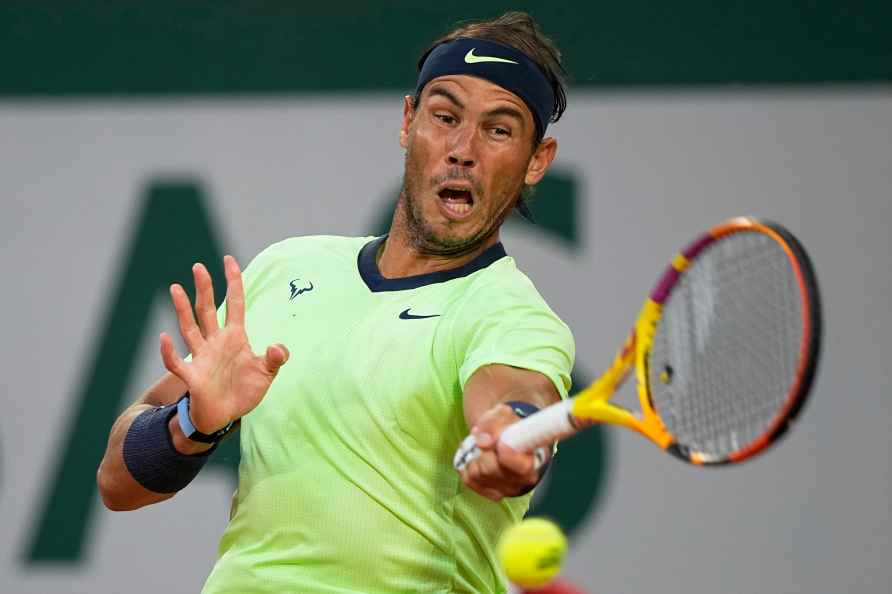 [Paris : Spain's Rafael Nadal plays a return to Richard Gasquet of France during their second round match on day 5, of the French Open tennis tournament at Roland Garros in Paris, France, Thursday, June 3, 2021. /PTI] Paris, June 4 : Rafael Nadal defeated Richard Gasquet 6-0, 7-5, 6-2 on his 35th birthday to reach third round of French Open here late on Thursday. The world No. 3, playing his first night match at the Roland Garros, took his head-to-head to 17-0 against Gasquet which is one of the most one-sided in Open era of tennis. The Spaniard won 84 percent on his first serve as compared 69 percent by the Frenchman. He also won seven of the 16 break-points he got. Interestingly, Gasquet hasn't taken a set off Nadal since 2008. The 13-time French Open champion started again in a dominant way, using heavy top-spin to win the first set 6-0. He won all of his first serve points in the opening set. Though Nadal took an early break and raced to 4-1 lead in second set, the local star fought and broke back at 3-5. However, the Spanish star took the set 7-5. The third set was again one-sided with Nadal winning it 6-2 without conceding a break. He will now meet British Cameron Norrie, who recovered from a set down to take beat Lloyd Harris 4-6, 6-3, 6-3, 6-2. Earlier on Thursday, former world No.1 Roger Federer, the oldest player at 39 in men's draw, entered the third round with a 6-2, 2-6, 7-6(4), 6-2 win over Marin Cilic of Croatia. World No.1 Novak Djokovic, too, moved into third round. Swiss Federer, who is in Djokovic's half of the draw and could possibly meet the world No.1 in the quarter-finals, will next clash with Dominik Koepfer. The German defeated 30th seed Taylor Fritz 6-3, 6-2, 3-6, 6-4 to advance. Djokovic also won on Thursday. The Serb defeated Pablo Cuevas of Uruguay 6-3, 6-2, 6-4 to move into the third round. Djokovic hit 31 winners to clinch the match in two hours and nine minutes. /IANS

Flood situation worsens in Bengal; PM Modi speaks to Mamata
[**EDS: TWITTER IMAGE POSTED BY @IAF_MCC ON WEDNESDAY, AUG 4, 2021.** Datia: An aerial view of the people stranded on the roof of a temple at a floode

Double Olympic medalist Sindhu arrives in Hyd to rousing welcome
[Hyderabad: Bronze medalist in Tokyo Olympics, shuttler PV Sindhu with her coach Park Tae-Sang during a press conference at her residence in Hyderabad

Chennai, Aug 4 : A 71-Year-old man was arrested by the Police at Thirukoilur in Kallikuruchi district under various sections of the Indian Penal Code (IPC) and Pocso Act, on charges of impregnating hi […]

Lahore, Aug 4 : Pakistan batsman Umar Akmal has been allowed to resume club cricket activities as part of his rehabilitation process, which commenced last month. In July this year, Akmal had apologise […]