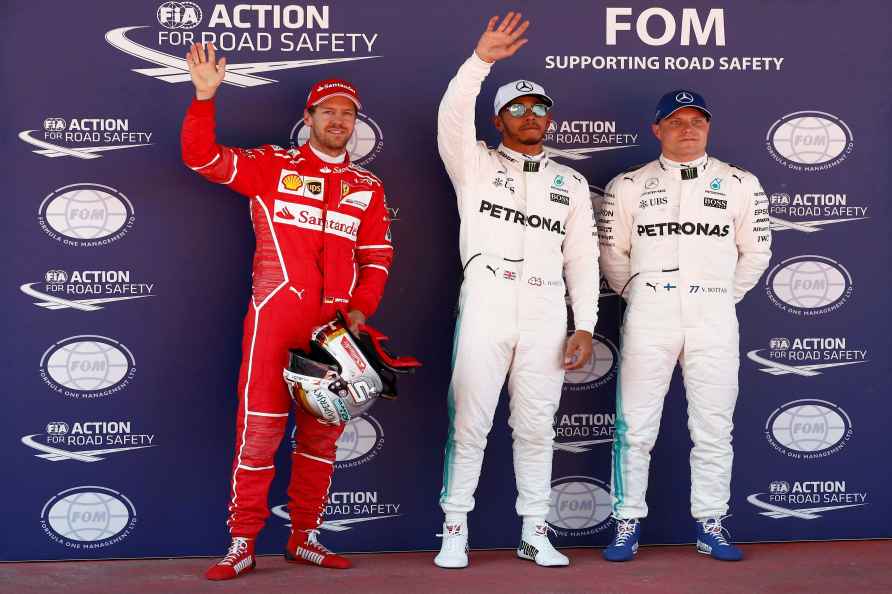 Barcelona, May 8 : Lewis Hamilton of Mercedes beat Red Bull's Max Verstappen to secure his 100th career Formula One pole position at the Spanish Grand Prix on Saturday. Hamilton has long held the record after beating Michael Schumacher's 68 career pole positions, while he still aims to beat four-time world champion Sebastian Vettel's record of 15 poles in a season, reports DPA. The seven-time world champion clocked 1 minute 16.741 seconds around the 4.655km Circuit de Barcelona-Catalunya, with Verstappen only 0.036 seconds behind. "I can't believe we're at 100. I'm ecstatic! It's like my first!," Hamilton said. Valtteri Bottas in the other Mercedes will start Sunday's race in third and believes it will be "very close" between his team and Red Bull. "I lost a tenth or two in Turn 10 which was marginal for the pole," he said. Verstappen said Red Bull is working very hard to beat Mercedes in Spain, and he "can be happy" with second on the grid. "I need to make sure to have a good start - the pace is there so we should have a good race as well," he added. Charles Leclerc of Ferrari and Esteban Ocon of Alpine close the top five on the starting grid. "Happy with today, I don't think there was much more to do in terms of positions for sure," Leclerc said. Hamilton was pushed all the way by his team-mate Bottas and Verstappen, facing windy and changing weather conditions, but delivered when it mattered. The Briton led the way after the opening runs in Q3 and neither himself, nor his opponents were faster on the second attempt. "It's down to the men and women back at the factory, it's been a dream to work with these guys," Hamilton said. Ferrari also saw Carlos Sainz sixth quickest, and will have both cars ahead of midfield opponents McLaren, who had Daniel Ricciardo in seventh and Lando Norris in ninth. Vettel will start the race 13th in his Aston Martin car, while rookie Mick Schumacher will be 18th on the grid. /IANS

Mumbai, June 9 : Bollywood actor Varun Dhawan on Wednesday reminisced about his childhood days, saying that he always loved playing in the rain. Varun posted a picture on Instagram, where he can […]