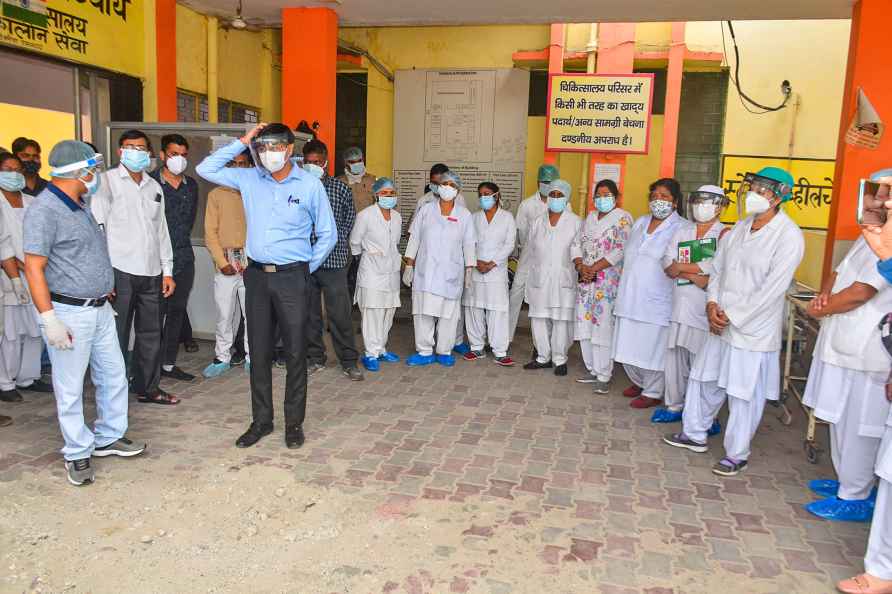 [Moradabad: Doctors and nurses hold a protest after an incident of vandalisation by the relatives of a COVID-19 patient who died in the COVID ward of the District Hospital in Moradabad, Friday, May 7, 2021. ( /PTI] Chennai, May 7 : Any help one needs in Virudhunagar district --one name that crops up each time is that of thirty-five-year-old Durai Prithviraj. A Village Administrative Officer (VAO) with the Tamil Nadu state government and also a full-time social worker, Prithviraj was lauded by the Chief minister's special award for his service during the battle against Covid during 2020. The VAO is now running two ambulances for the needy and these ambulances played a major role in saving the lives of several people during the first wave of the Covid pandemic. Prithviraj was a social worker even during his college days but his determination to serve the society was triggered after his horrific experience when his brother, Rajesh, died in a road accident in 2011. He ran from pillar to post to get an ambulance to bring the body of his brother to their native village, Aruppukottai in Virudhunagar district. Prithviraj told IANS: "My brother died as an ambulance did not arrive on time and we could not get hold of an ambulance to bring his body back home and we were asked to shell out a lot of money. I don't want anyone to face this situation in life and hence saved money to buy an ambulance." Now anywhere in Virudhunagar district, the name which comes in mind of police officials and administrative officials is that of Prithviraj when they need to transport Covid patients from homes to hospitals and from one hospital to Medical college hospital. Arulnayakam, an officer with Virudhunagar district told IANS: "Whenever we want to transport a patient to a hospital and if the patient does not have money, we call Prithiviraj and he sorts out the matter." Officials remember him for distribution of food and even for taking care of Children in Child Welfare Centres. The good Samaritan he is, Prithviraj has started a trust in the name of his late brother, Rajesh Udhavum Karangal at Aruppukottai in 2014. The NGO is taking care of the medicinal needs, educational needs and other volunteering needs. In June 2020 when Covid cases started mounting there was a shortage of ambulances and by July 2020, the crisis mounted -- immediately Prithviraj pressed into service his ambulance. Prithviraj said: "We needed one more ambulance and a good person donated the second ambulance to us which was helpful throughout the pandemic wave last year." The Village Administrative Officer is clear that no charge would be levied from those who don't have money to pay. He said, "We don't charge anything from people who don't have money and even if people have money we don't ask ,if people are willing to donate we accept. In fact we are running our service through donations only, nothing else. The ambulance services were charging two times to three times the normal fare during the pandemic times and we were helping people without charging anything from those who don't have money." There are six volunteers who are involved in moving Covid patients and Prithiviraj buys, masks and PPE kits with donations taken from society as well as his senior government officials. One of these ambulances with four beds have been handed over temporarily to the Virudhunagar Medical College Hospital as there was shortage of ambulances in the hospital. Prithviraj believes in delegation. His policy is there is no need for all the work to be done completely by him or his trust and if needed he would support other initiatives. He said, "The ambulance allocated to Virudhunagar Medical College Hospital did not arrive in time and hence they asked for my ambulance with four beds which I have handed over to the Medical college." The good Samaritan he is Prithviraj is ready to provide services to anyone in need around Virudhunagar and he and his team will reach out to anyone in need -- be it educational, medical emergency or need for food. /IANS

Bareilly, Bulandshahr in UP exempted from corona curfew

Lucknow, June 5 : In view of the drop in Covid infections, Bareilly and Bulandshahr in Uttar Pradesh have been exempted from partial corona curfew. The policy of tracing, testing and treatment adopted […]

Man killed for just a glass of water in Bihar's Begusarai

Patna, June 5 : A physically challenged person was killed in Bihar's Begusarai district just for a glass of water, a police official said on Saturday. The deceased Chote Lal Sahani, 50, a native […]

New Delhi, June 5 : Minerva Academy FC were adjudged winners of Football for Friendship Award 2021 on Saturday. The purpose of the award is to attract attention to children's football developmen […]