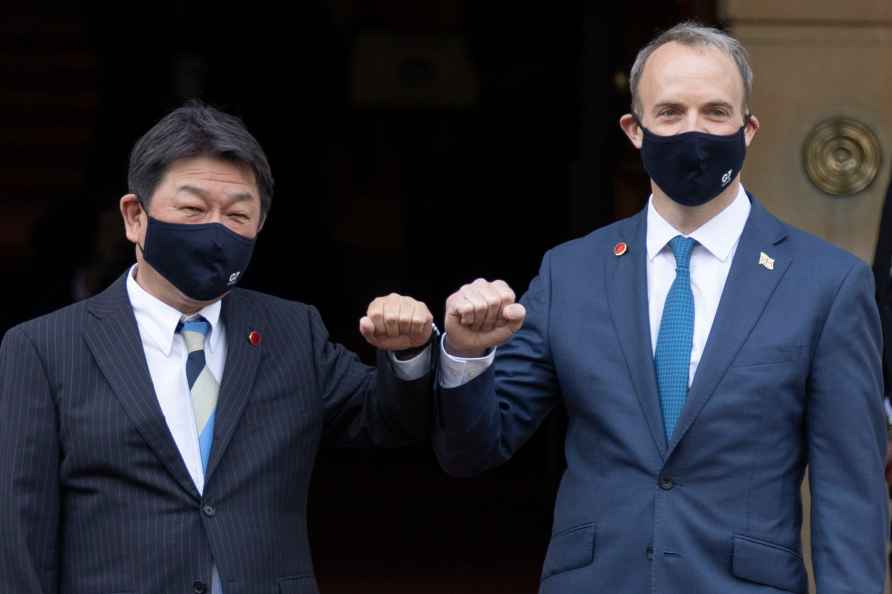 [London : Japan's Foreign Minister Toshimitsu Motegi, left, poses with Britain's Foreign Secretary Dominic Raab at the start of the G7 foreign ministers meeting in London Tuesday May 4, 2021. G7 foreign ministers meet in London Tuesday for their first face-to-face talks in more than two years. /PTI] London, May 4 : In a first face-to-face meeting with UK Foreign Secretary Dominic Raab, US Secretary of State Antony Blinken discussed the raging Covid-19 pandemic and a possible free trade agreement (FTA) between Washington and London. The meeting took place in London on Monday ahead of the first in-person meeting of the G7)Foreign and Development Ministers in two years, reports Xinhua news agency. "Foreign Secretary Dominic Raab hosted US Secretary of State Antony Blinken at 1 Carlton Gardens ahead of this week's G7 Foreign Ministers meeting. They held a discussion on foreign policy priorities and opportunities to strengthen the UK-US friendship," a British Foreign, Commonwealth & Development Office spokesperson said in a statement. "Discussions included UK-US shared commitment to open societies, a strengthened multilateral system, efforts to build back better from COVID-19, including through the COVAX facility and a UK-US FTA," said the spokesperson. They also discussed latest developments in Afghanistan, Iran and Ethiopia, among other issues, according to the spokesperson. During their joint press conference, Raab said that the world has changed quite a bit in the past two years, which brings challenges that require global solutions. "Our societies and our economies have been shocked and shaken by coronavirus," said Raab. "There's also rapid technological change which brings new opportunities, we've seen that with collaboration on things like the vaccine, but also acute challenges, and there are global threats from COVID to climate change that frankly demand global solutions and we're committed to trying to find and forge those solutions," he added. Taking to Twitter, Blinken said: "Very good meeting with Dominic Raab on US-UK shared priorities with the Indo-Pacific, NATO, Ukraine, Iran, Burma, Ethiopia, and other global issues. An ever-closer Transatlantic partnership is critical to confront global challenges and build back better together." The G7 Ministers gathered Monday for a three-day meeting in London for the first time in two years to address such issues as economist recovery after the coronavirus pandemic and climate change. The conference was reportedly held with strict Covid-secure measures being insured by organisers. The last G7 Foreign Ministers Meeting took place in France in April 2019. The UK holds the rotating presidency of the G7 group, which also includes the US, France, Germany, Canada, Japan and Italy. The meeting this week will also be attended by representatives from the European Union, Australia, India, Japan, South Korea, and South Africa, as well as this year's chair of the Association of Southeast Asian Nations (ASEAN), Brunei. The G7 summit will be held in Cornwall, a seaside resort in southwestern England, on June 11-13. /IANS

Over 15.89cr Covid jabs carried out in India
[New Delhi: People over 18 years of age wait in a queue to receive their first doses of COVID-19 vaccine, at a vaccination centre, in New Delhi, Tuesd

As curbs ends, Goa MLAs, panchayats impose their own 'lockdowns'

Panaji, May 3 : In developments which could raise questions about Goa Chief Minister Pramod Sawant's grip over administration, ruling and opposition MLAs as well as individual village panchayats over […]

Patna: A crowded market after the Bihar government announced complete lockdown due to the coronavirus pandemic, in Patna, Tuesday, May 4, 2021. ( /PTI […]