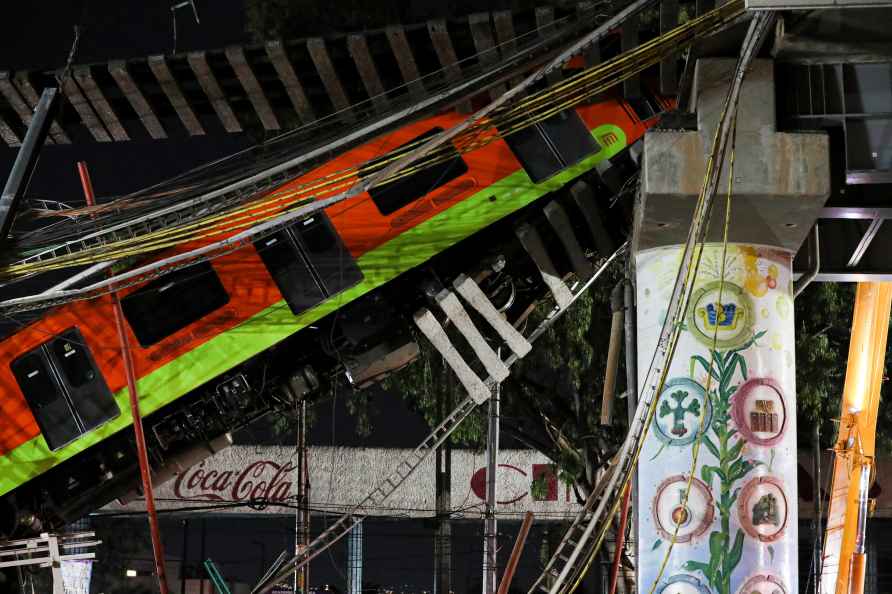 [Mexico City : Mexico City's subway cars lay at an angle after a section of Line 12 of the subway collapsed in Mexico City, Tuesday, May 4, 2021. The section passing over a road in southern Mexico City collapsed Monday night, dropping a subway train, trapping cars and causing at least 50 injuries, authorities said. /PTI] Mexico City, May 4 : At least 15 people were killed after a subway bridge partially collapsed in Mexico City, Mayor Claudia Sheinbaum announced. Another 34 people were taken to hospital following the incident on Monday night, dpa news agency quoted Sheinbaum as saying to reporters. Several carriages of a line 12 subway train plunged metres deep and collided with each other, videos circulating on social media showed. Initial findings showed part of the bridge gave way, Sheinbaum said. Footage also showed rescuers using a ladder to pull passengers out of train cars as they were hanging. Cars had been travelling underneath the collapsed section of the overpass at Olivos station on the south-eastern edge of the city. Because of the train's unstable position, rescue efforts had to be suspended, Sheinbaum added. /IANS

The Offspring's Dexter Holland: Feels right to write songs about what's going on
Los Angeles, May 3 : American rock band The Offspring talks of everything that is happening in the United States right now in their 10th LP, "Let The

[Mexico City : Mexico City's subway cars lay at an angle after a section of Line 12 of the subway collapsed in Mexico City, Tuesday, May 4, 2021. The section passing over a road in southern Mexico Cit […]

Lahore : Pakistani Shiite Muslims take part in a procession commemorating the death anniversary of Imam Ali, the son-in-law and cousin of the Prophet Muhammad and the first Imam of the Muslim Shiites, […]

New Delhi, May 3 : A team of Israeli researchers have identified a link between coronavirus and stroke victims, especially in healthy young people, media reports said. The global study led by re […]