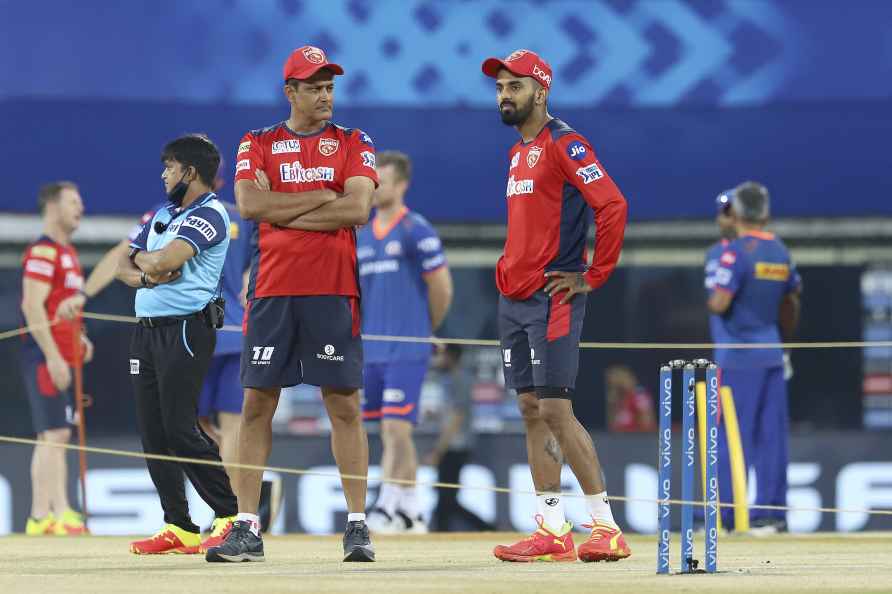 [Chennai: Anil Kumble, Head Coach of Punjab Kings and KL Rahul Captain of Punjab Kings before the start of the match 17 of the Vivo Indian Premier League 2021 between the Punjab Kings and the Mumbai Indians held at the M. A. Chidambaram Stadium, Chennai on the 23rd April 2021.( /PTI] Chennai, April 23 : Fast bowler Mohammed Shami tends to lose his length while bowling in the death overs in T20s which makes him less effective as compared to Jasprit Bumrah, said former India batsman Virender Sehwag. Shami and Bumrah, often seen as spearheads of India's pace battery, will face each other when their teams Punjab Kings and Mumbai Indians face each other in the Indian Premier League (IPL) on Friday. "I think that Bumrah will be the one to watch out for. He's an experienced bowler and yorkers are generally harder for batsmen to hit and he bowls them often," said Sehwag on Flipkart's Power Play with Champions. "I think whenever Mohammed Shami bowls in the later overs of a match, it affects his yorkers and the lengths of his deliveries. Hence I feel that Bumrah will concede lesser runs in today's game," he further said. Shami has gone wicketless in his last two matches for Punjab Kings against SunRisers Hyderabad and Delhi Capitals respectively. He was hit to all corners of the park by Shikhar Dhawan in the match against DC and ended his spell with an economy of 13.25, having conceded a whopping 53 runs in four overs. /IANS

Shami's lengths affected when he bowls in death overs: Sehwag
[Chennai: Anil Kumble, Head Coach of Punjab Kings and KL Rahul Captain of Punjab Kings before the start of the match 17 of the Vivo Indian Premier Lea

Another grim record, India reports 3.32L cases and 2,263 deaths
[Birbhum: People listen to the virtual address of Prime Minister Narendra Modi for the last two phases of election campaigning during the ongoing Wes

Shami's lengths affected when he bowls in death overs: Sehwag

Gurugram: Migrants board buses to leave for their native places amid a surge in COVID-19 cases, at Rajiv Chowk in Gurugram, Friday, April 23, 2021. ( /PTI […]

Chennai, April 23 : With the Covid-19 cases mounting in Tamil Nadu and the state recording 12,652 fresh cases on Thursday and 59 deaths, Chennai region continues to be the worst hit with 3,780 fresh c […]