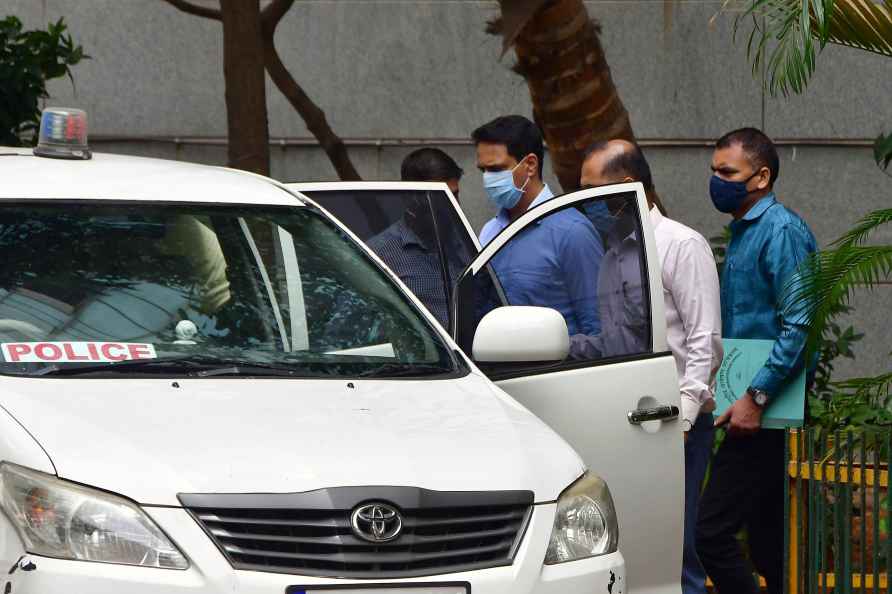 [Mumbai: NIA produce Mumbai Crime branch officer Sunil Mane for his alleged role in Antilia bomb scare and Mansukh Hiran murder case to a Sessions Court in Mumbai, Friday, April 23, 2021. ( /PTI] Mumbai, April 23 : The National Investigation Agency on Friday arrested Mumbai Police Crime Branch inspector Sunil Mane in connection with the twin cases of a SUV planted near the home of industrialist Mukesh Ambani and Thane businessman Mansukh Hiran's murder, official sources said. Mane, who was subjected to a tough grilling on Thursday before his arrest, is suspected to have helped the arrested-suspended Assistant Police Inspectors Sachin Vaze, Riyazuddin Kaji and the other accused, pointing to his involvement in these cases. He was produced before a Special NIA Court later which sent him to NIA custody till April 28. Seeking his custody, the NIA said it wanted to obtain his mobile call data records and other electronic devices to prove his alleged role in the crimes. The Special Court also extended the judicial custody of two other cops, Vaze and Kaji till May 5 in the same cases. Mane became the third Crime Branch official after Vaze and Kaji to be arrested in these cases in the past two months after the Mumbai Police, Maharashtra Anti-Terrorism Squad and finally, the NIA probed the cases. On February 25, a Scorpio SUV with 20 gelatin sticks and a threat letter was recovered near Antilia, the home of the Ambanis, and on March 5, the body of Hiran, the owner of the SUV, was fished out of the wetlands in the Thane Creek. Of the total five arrests till date in these cases which created a national sensation, three are serving Mumbai cops - besides convicted ex-cop Vinayak Shinde and cricket bookie Naresh Gor. Later, the state government effected a major shakeup in the police force which saw the transfer of then Commissioner of Police Param Bir Singh as Commandant General, state Home Guards, while IPS officer Hemant Nagrale replacing him as city police chief. As a political row erupted amidst allegations and counter-allegations, Home Minister Anil Deshmukh quit under a cloud and was replaced by Dilip Walse-Patil. /IANS

Delhi has only 25 ICU beds, hospitals overburdened with patients
[New Delhi: A tanker supplies medical oxygen gas for COVID-19 patients at the LNJP hospital, amid a shortage of the gas in the national capital due to

UP: Cremation grounds expand as Covid deaths mount
[Lucknow: Family members of COVID-19 patients wait to fill their empty cylinders with medical oxygen outside an oxygen filling centre, as demand for t