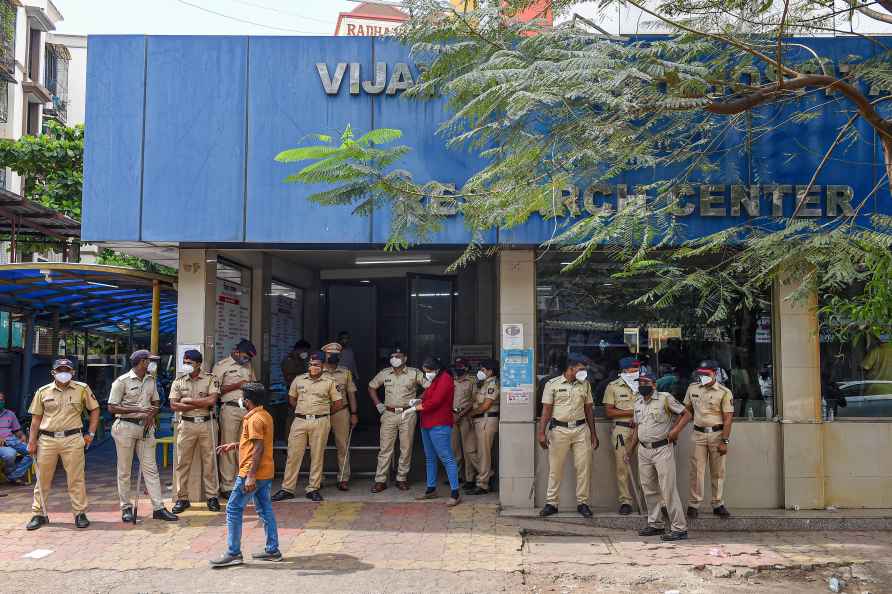 [Mumbai: Police personnel stand outside the Vijay Vallabh COVID care hospital after a fire in Virar West, on the outskirts of Mumbai, Friday, April 23, 2021. Thirteen COVID -19 patients died in the blaze at the intensive care unit of the hospital. ( /PTI] Palghar, April 23 : At least 13 patients including 6 women, perished in a major fire that broke out in a private Covid hospital in Virar in Palghar district of Maharashtra, early on Friday, officials said. The conflagration was noticed around 3.15 am in the ICU ward located on the second floor of the four-storeyed Vijay Vallabh hospital at Tirupati Nagar in Virar town. Fire-fighting teams and other agencies from the Vasai-Virar Municipal Corporation rushed to the spot and battled the blaze, the tentative cause of which is suspected to be a short-circuit. The fire was brought under control and extinguished after two hours, around 5.50 am. While 13 in the burning ICU perished, around 4 others there were shifted and rushed to safety before the flames spread further. Taking serious note, Chief Minister Uddhav Thackeray ordered a probe into the tragedy and announced a compensation of Rs 5 lakh to the kin of all decreased, besides Rs 100,000 to all the seriously injured. Agriculture Minister and Palghar Guardian Minister Dada Bhuse, two local legislators Hitendra Thakur and his son Kshitij Thakur, top police and civic officials also rushed to the site to review the rescue operations. This is the second major Covid season tragedy coming two days after an oxygen gas leak in a Nashik Municipal Corporation hospital on Wednesday claimed 29 lives so far. /IANS

SL continues fire fighting efforts onboard burning ship
[Kapungoda: Sri Lankans salvage wreck washed off to the shore from the burning Singaporean ship MV X-Press Pearl which is anchored off Colombo port at

Sensex ends above 51,000, IT stocks up
Mumbai, May 26 : The Indian stock market surged on Wednesday with the BSE Sensex closing above the 51,000 mark. Healthy buying was witnessed in

Rupee surges 18 paise to 72.42 against US dollar in early trade.

Porto: People gather next to a giant replica of the UEFA Champions League trophy in Porto, Portugal, Thursday, May 27, 2021. Manchester City will play against Chelsea in the Champions League final on […]

Srinagar, May 26 : Another confirmed black fungus victim succumbed on Wednesday in J&K while 8 patients suspected to be suffering from mucormycosis are being treated in the Union territory. Auth […]