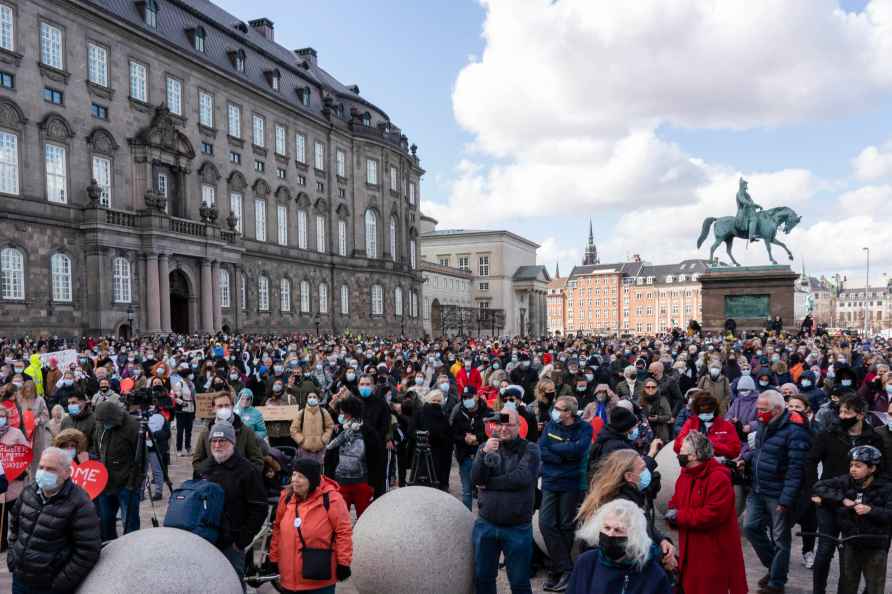 [Copenhagen : People attend a demonstration against the tightening of Denmark.......s migration policy and the deportation orders in Copenhagen, Denmark, Wednesday, April 21, 2021. Ten years after the start of the Syrian civil war, Denmark has become the first European country to start revoking the residency permits of some refugees from the Damascus area. /PTI] By Arul Louis New York, April 23 : It is in the world's interest that Americans are vaccinated and the US has to first to take care of the requirements of its own people, State Department Spokesperson Ned Price has said about Washington's restrictions on exporting raw materials for making the Covid-19 vaccines. Asked at his briefing on Thursday if President Joe Biden's administration had made a decision on the requests made from India to lift the ban on the export of vaccine raw materials to India, Price said bluntly, "We have a special responsibility to the American people." "It's, of course, not only in our interest to see Americans vaccinated, it's in the interests of the rest of the world to see Americans vaccinated," he added. As for the rest of the world, "We will, of course, always do as much as we can, consistent with our first obligation," he declared. US Secretary of State Anthony Blinken and India's External Affairs Minister S. Jaishankar discussed Covid-19 and health cooperation last week and it had opened the possibility of Washington allowing vaccine raw materials to be exported. Earlier this month, Serum Institute of India (SII) CEO Adar Poonawala appealed to Biden to allow the exports of vaccine raw materials. "If we are to truly unite in beating this virus, on behalf of the vaccine industry outside the US, I humbly request you to lift the embargo of raw material exports out of the US so that vaccine production can ramp up," he tweeted. Price first tried to sidetrack the issue of restrictions on vaccine raw materials exports by claiming that the reporter had asked about intellectual property rights for vaccines and that it was a matter for the US Trade Representative (USTR). But the reporter from a Western news service had in fact asked only about the raw materials. The question clearly was, "We reported that they (India) have asked the US to lift a ban on the export of vaccine raw materials, which basically threatens to slow the country's vaccination drive. When will the administration decide on that?" Price said, "You asked about intellectual property and certain controls. That was -- is within the purview of USTR." The export controls do not, in fact, come under the jurisdiction of the USTR which deals only with the matters of intellectual property rights. The Defence Production Act that has been invoked to boost vaccine production in the US is reported to curtail the export of raw materials needed elsewhere. Price then said, "What I will say broadly is that the US first and foremost is engaged in an ambitious and effective and, so far, successful effort to vaccinate the American people. That campaign is well underway, and we're doing that for a couple of reasons." "Number one, we have a special responsibility to the American people. Number two, the American people, this country has been hit harder than any other country around the world -- more than 550,000 deaths, tens of millions of infections in this country alone," he said. But Price conceded that the spread of the virus elsewhere is also a threat to everyone. "The point the Secretary (Blinken) has made repeatedly is that as long as the virus is spreading anywhere, it is a threat to people everywhere." But support his point about the America First vaccination policy he added, "So as long as the virus is spreading uncontrolled in this country, it can mutate and it can travel beyond our borders. That, in turn, poses a threat well beyond the US." Price asserted that the US playing a "leadership role" in "seeking to contain the virus beyond our borders." He cited the US rejoining the World Health Organisation and Washington's contribution of $2 billion to the COVAX facility that provides vaccines to developing countries and the promise of $2 billion more to it. He also said that the US was sending vaccines to its neighbours Canada and Mexico. He said, "When it comes to India, (there is the) the Quad and the arrangement with the Quad, including to increase production capacity in India." The leaders of the Quad -- Biden and Prime Ministers Narendra Modi of India, Yoshihide Suga of Japan and Scott Morrison of Australia -- had agreed at their summit last month on a joint programme to supply Covid-19 vaccines to countries in the Indo-Pacific. The vaccines manufactured by India with US and Japanese funding would be distributed with Australian logistics under the programme. Biden's Spokesperson Jen Psaki last week also sidestepped a question about lifting the ban on vaccine raw materials speaking instead about the reaction of USTR Katherine Tai to the request from India and South Africa for waiving the intellectual property rights for the vaccine. While not committing to waiver of intellectual property rights, Tai had given a hint of optimism saying that the inequities in the developing countries' access to vaccines was unacceptable and "extraordinary times require extraordinary leadership, communication, and creativity." India has become the world's main supplier of vaccines because of the license granted to SII by Oxford and AstraZeneca for the vaccine developed by them. (Arul Louis can be reached at arul.l@ians.in and followed @arulouis) /IANS

On India's request for vaccine raw materials, US says first obligation is to Americans
[Copenhagen : People attend a demonstration against the tightening of Denmark.......s migration policy and the deportation orders in Copenhagen, Denma

On India's request for vaccine raw materials, US says first obligation is to Americans

[Copenhagen : People attend a demonstration against the tightening of Denmark.......s migration policy and the deportation orders in Copenhagen, Denmark, Wednesday, April 21, 2021. Ten years after the […]

DW BUREAU / Chandigarh The Haryana Cabinet on Thursday approved the new excise policy for 2021-22 proposing a "marginal increase" in liquor prices, even as it decided to do away with the COVID-1 […]