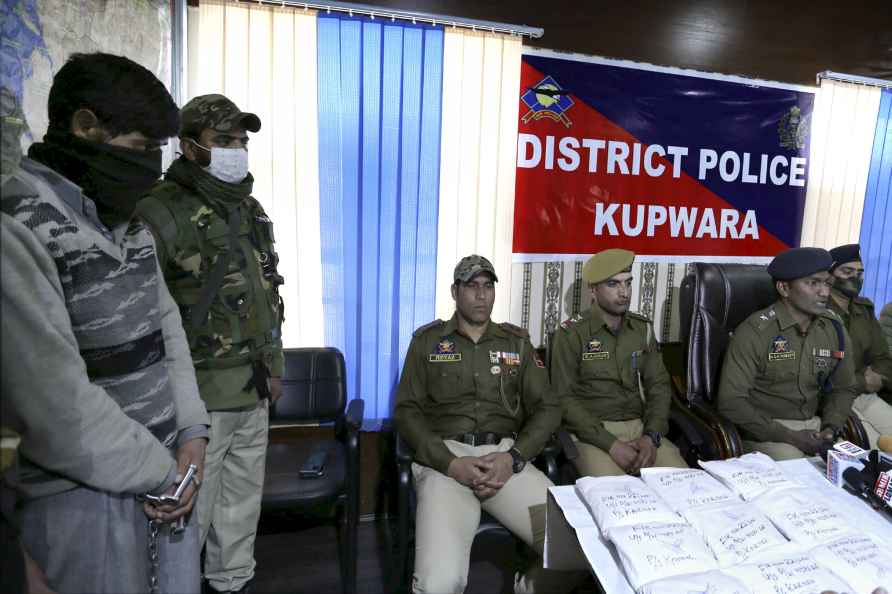 [Kupwara: Police show packets of heroine, worth Rs 90 crore, which was recovered after bust of a Pakistan sponsored narco-terror module in Kupwara district, Thursday, April 8, 2021. ( /PTI] Srinagar, April 8 : Huge quantity of heroin was recovered after a Pakistani sponsored terror module was busted by Jammu and Kashmir police in North Kashmir's Kupwara district on Thursday, officials said. Police said, based on reliable information, Kupwara Police busted a Pakistan sponsored narco-terror module and arrested a terrorist associate identified as Mukhtar Husain Shah, a resident of Karnah in Kupwara. Nine kg narcotic substance worth Rs 60 crore in market value was recovered from his possession, according to the police. Police said other persons involved who are absconding have been identified and efforts are on to arrest them. "The module was in close connection with Pakistan based terror handlers and were involved in drug trade and assisting financially to active terrorists operating in the Valley. The recoveries also exposed the inter connection between drug dealers and terrorists," police said. "The module was working for terrorists to strengthen their activities in the Valley and were misguiding and motivating the local youth to join terrorist ranks." Police said a case has been registered and investigation has been taken up. "A special investigation Team (SIT) has been constituted to ascertain the details of the ties of the accused with terrorist outfits, radicals, smugglers and other anti national elements," police said. /IANS

Post election murder, Kannur continues to be tense
[XSE: This photo released by Nournews on Thursday, April 8, 2021, shows the flooded engine room of the Iranian ship MV Saviz after being attacked in R

Tel Aviv, April 8 : Israeli Prime Minister Benjamin Netanyahu warned the US that a possible future nuclear agreement with Iran will not obligate the Jewish state. The remark was made on Wednesda […]

Bijapur: CoBRA commando Rakeshwar Singh Manhas while being released by Naxals at a Maoist hideout, in Bijapur district of Chhattisgarh, Thursday, April 8, 2021. ( /PTI […]

Berlin, April 8 : German flag carrier Lufthansa is converting an Airbus A350-900 into a climate research aircraft, the airline announced. The work in a hangar in Malta already started, Xinhua ne […]