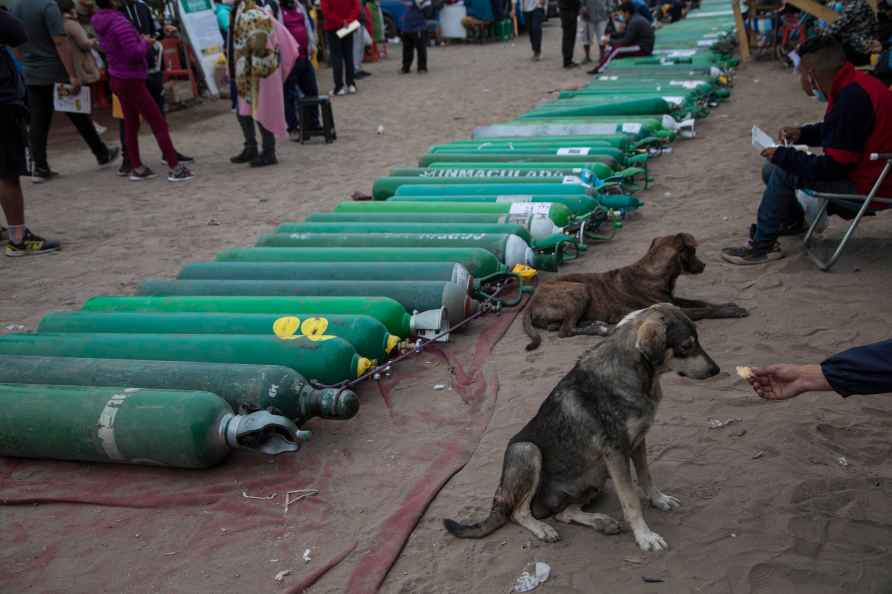 [Lima : A man offers a dog a treat next to a line of empty oxygen cylinders stretched across a dirt road, as people wait for a shop to open in order to refill their tanks, in the Villa El Salvador neighborhood, as the lack of medical oxygen to treat COVID-19 patients continues in Lima, Peru, Wednesday, April 7, 2021, amid the new coronavirus pandemic. /PTI] Ottawa, April 8 : As Covid-19 cases rise due to more transmissible variants spreading across Canada, populous provinces in the country are reinstating public health restrictions to stem the pandemic. Canada on Wednesday afternoon reported 4,800 new cases of Covid-19, bringing the cumulative total to 1,025,693, including 23,170 deaths, according to CTV. Ontario province declared its third state of emergency Wednesday afternoon since the beginning of the Covid-19 pandemic last year and is to impose a provincewide stay-at-home order that will go into effect at 12.01 a.m. Thursday and will last 28 days, Xinhua news agency reported. "I can't stress this enough. Things are extremely, extremely serious right now. And I'm extremely concerned," Ontario Premier Doug Ford told a press conference Wednesday afternoon. "The situation is evolving rapidly, hour by hour. And as things change, as we learn more about these deadly new variants, as we see new problems arise," Ford said. "We need to adapt. We need to move quickly and decisively. And right now, above all else, our plan is to get needles in the arms and protect our hospitals. That's why, today, on the advice of the chief medical officer of health I'm declaring a state of emergency." Under the order, all non-essential retailers will close to in-person shopping, in-person dining will be prohibited, and gyms and personal care services will be shuttered. Big box stores will be allowed to remain open only to sell essential goods. In neighbouring Quebec, Premier Francois Legault also announced more restrictions. Gyms in red zones, which include Montreal, will close Thursday and places of worship will be limited to 25 people at a time. As well, beginning next week, high school students in Secondary 3, 4 and 5 will again attend class on alternating schedules while extracurricular activities will be stopped as some have proven to be the sources of transmission. Legault said a 9.30 p.m. curfew currently in place in the Montreal area will not change, but the government may decide to move it back to 8 p.m. if the situation doesn't improve. In a statement Wednesday afternoon, the Vancouver Canucks announced that the ice hockey team's 21 players and four staff members had tested positive for Covid-19 and that the source infection was a variant. It's unclear which Covid-19 variant started the outbreak, but the Canucks said genome sequencing was being performed by the British Columbia Centre for Disease Control. "An ongoing investigation by Vancouver Coastal Health and club contact tracing staff attributes the source infection to a single individual obtained in a community setting, which has since been identified by public health as a public exposure location," the team said. "This is a stark reminder of how quickly the virus can spread and its serious impact, even among healthy, young athletes," it added. Alberta Premier Jason Kenney has announced that customer capacity in retail stores will be lowered to 15 percent, restaurants must close to in-person dining, and low-intensity group fitness activities will once again be banned. Kenney acknowledged that decisions to shut down indoor dining, curb indoor fitness and reduce retail capacity will meet resistance. The nationwide data show a seven-day average of 6,328 new cases daily in Canada from March 31 to April 6, according to Statistics Canada on Wednesday. Sustained high infection rates are also impacting Covid-19 severity indicators, which are increasing, particularly in areas with elevated disease activity. The rise in severe and critical illnesses is placing renewed strain on the health system and healthcare workforce. An average of 2,423 people with Covid-19 were being treated in Canadian hospitals each day from March 31 to April 6, including 807 being treated in intensive care units. While Covid-19 continues to impact people of all ages in Canada, infection rates are the highest among those aged 20 to 39 years of age, said Theresa Tam, Canadian chief public health officer, in a statement on Wednesday. "As of April 6, a total of 16,127 variant of concern cases have been reported across Canada, including 14,790 involving B.1.1.7 variants, 1,000 P.1 variants and 337 B.1.351 variants," Tam said. She said that although B.1.1.7 continues to account for the majority of variants of concern in Canada and has likely replaced the original virus in some areas, there has been a concerning rise in P.1 cases in recent weeks. "Early evidence suggests that the P.1 variant may reduce the effectiveness of vaccines, making it even more important to control its spread," Tam added in the statement. /IANS

More restrictions in Canada as Covid-19 continues rampaging
[Lima : A man offers a dog a treat next to a line of empty oxygen cylinders stretched across a dirt road, as people wait for a shop to open in order t

Under-30s in Britain to be offered alternative to AstraZeneca
[Bucharest : World Health organization Director for Europe Hans Kluge speaks to media during a press conference where he said he would take an AstraZe

[Lima : A man offers a dog a treat next to a line of empty oxygen cylinders stretched across a dirt road, as people wait for a shop to open in order to refill their tanks, in the Villa El Salvador nei […]

[Washington : President Joe Biden speaks during an event on the American Jobs Plan in the South Court Auditorium on the White House campus, Wednesday, April 7, 2021, in Washington. Vice President Kama […]