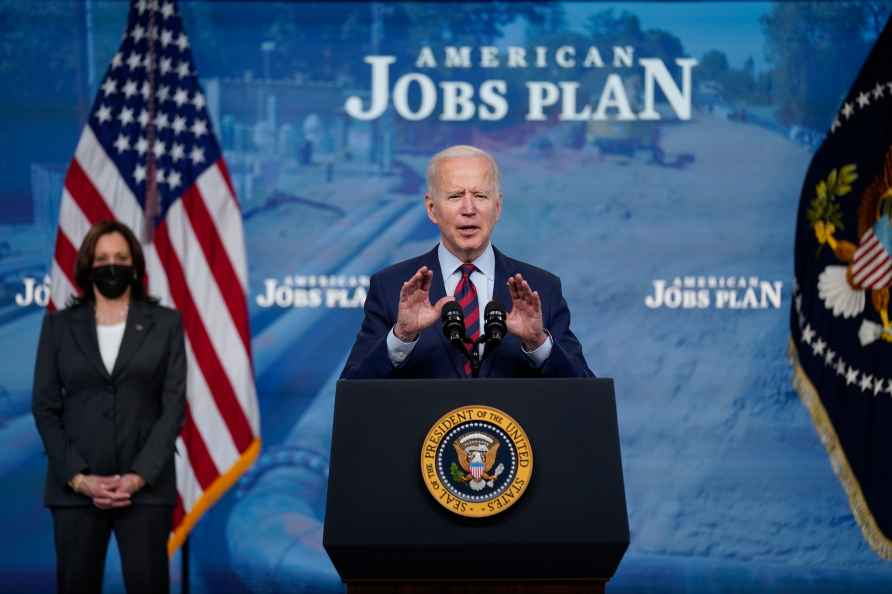 [Washington : President Joe Biden speaks during an event on the American Jobs Plan in the South Court Auditorium on the White House campus, Wednesday, April 7, 2021, in Washington. Vice President Kamala Harris is a left. /PTI] Washington, April 8 : President Joe Biden spoke with Jordan's King Abdullah II to voice US support for his leadership and affirmed the two-state solution to the Israeli-Palestinian issue. Biden expressed "strong US support for Jordan and underscore the importance of King Abdullah II's leadership to the United States and the region," the White House said in a statement on Wednesday, Xinhua news agency reported. The two leaders also discussed bilateral ties, Jordan's important role in the region, and strengthening cooperation on political, economic, and security issues. "The President also affirmed that the United States supports a two state solution to the Israeli-Palestinian conflict," the statement added. The phone call came as Jordan returns to stability from a royal rift over the weekend. King Abdullah II said on Wednesday that Prince Hamza, who was accused of being part of a plot to destabilize Jordan by authorities, was in the king's care. In a letter to the nation published by the Royal Hashemite Court, the king said the "sedition has been nipped in the bud" and Jordan is safe and stable. The Biden administration on the same day announced plans to restore US assistance for the Palestinian people. Secretary of State Antony Blinken in a statement introduced a US $235 million package of economic, development, and humanitarian aid for the Palestinians, a large portion of which will go to the United Nations Relief and Works Agency for Palestine Refugees in the Near East (UNRWA). Former US President Donald Trump cut hundreds of millions of dollars in aid to Palestinians, and during his administration, diplomatic contacts with Palestinians came to a virtual halt. After Trump declared Jerusalem the capital of Israel in December 2017, the Palestinian Authority broke off all official relations with the White House and the State Department, though security cooperation continued. US Ambassador to the United Nations Linda Thomas-Greenfield told the Security Council last month that Washington will "re-open diplomatic channels of communication" with Palestinians that has been cut off under the previous administration. /IANS

Under-30s in Britain to be offered alternative to AstraZeneca
[Bucharest : World Health organization Director for Europe Hans Kluge speaks to media during a press conference where he said he would take an AstraZe

Two arrested for raping Gurugram bar employee
Gurugram, April 7 : Two people have been arrested in connection with the gangrape of a 24-year-old bar employee while she was returning home after lat

[Washington : President Joe Biden speaks during an event on the American Jobs Plan in the South Court Auditorium on the White House campus, Wednesday, April 7, 2021, in Washington. Vice President Kama […]

Athens : PSG's Neymar, left, prepares to take a shot as Bayern's Leon Goretzka runs behind him during the Champions League quarterfinal soccer match between Bayern Munich and Paris Saint Germain in Mu […]