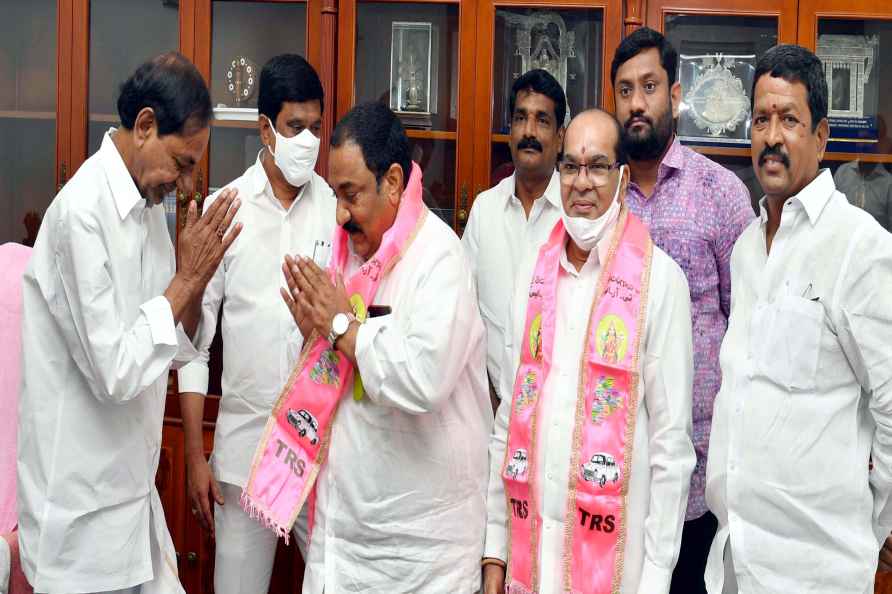 [Hyderabad: MLA Mechcha Nageshwara Rao joins TRS in the presence of TRS chief and Telangana CM K. Chandrasekha Rao in Hyderabad, Wednesday, April 7, 2021. Nageshwara Rao joined TRS after quitting TDP. ( /PTI] Hyderabad, April 7 : The Telugu Desam Party's presence in the Telangana Assembly came to an end on Wednesday with both party MLAs urging Speaker Pocharam Srinivas Reddy to merge them with ruling Telangana Rashtra Samithi (TRS). Mecha Nageshwar Rao and Sandra Venkata Veeraiah called on the Speaker and submitted him a letter, requesting that the Telugu Desam Legislative Party (TDLP) be merged with the Telangana Rashtra Samithi Legislative Party (TRSLP). While Venkata Veeraiah had already joined the TRS, Nageshwar Rao joined the ruling party on Wednesday. Before meeting the Speaker, the two MLAs called on Chief Minister K. Chandrasekhar Rao and expressed their desire to join the TRSLP. The TRS chief reportedly responded positively to their request and welcomed them into the party. Both the TDP MLAs also informed Legislative Affairs Minister Vemula Prashanth Reddy about their decision to merge TDLP with TRSLP. The Assembly Secretary is likely to issue an official bulletin about the merger. The TDP had won only two seats in 119-member Telangana Assembly in the 2018 elections. The party had won Ashwaraopeta and Satthupalli Assembly seats, both in Khammam district. However, both the MLAs have been staying away from party activities. Venkata Veeraiah quit the TDP in March 2019 and joined the TRS. The merger of the TDLP with the TRSLP will take TRS' strength in the Assembly to 104. The TRS, which retained power in 2018, had won 88 Assembly seats. Later, a dozen MLAs of opposition Congress and two Independent MLAs joined it. /IANS

Tel Aviv, April 7 : Newly-elected Israeli lawmakers were sworn in amid uncertainties over the possibility of forming a new government two weeks after the country's fourth election in two years also en […]

Sensex in green ahead of RBI's monetary policy announcement

Mumbai, April 7 : The key Indian equity indices traded in the green on Wednesday morning ahead of the Reserve Bank of India's monetary policy announcement. At 10 a.m., the central bank is schedu […]