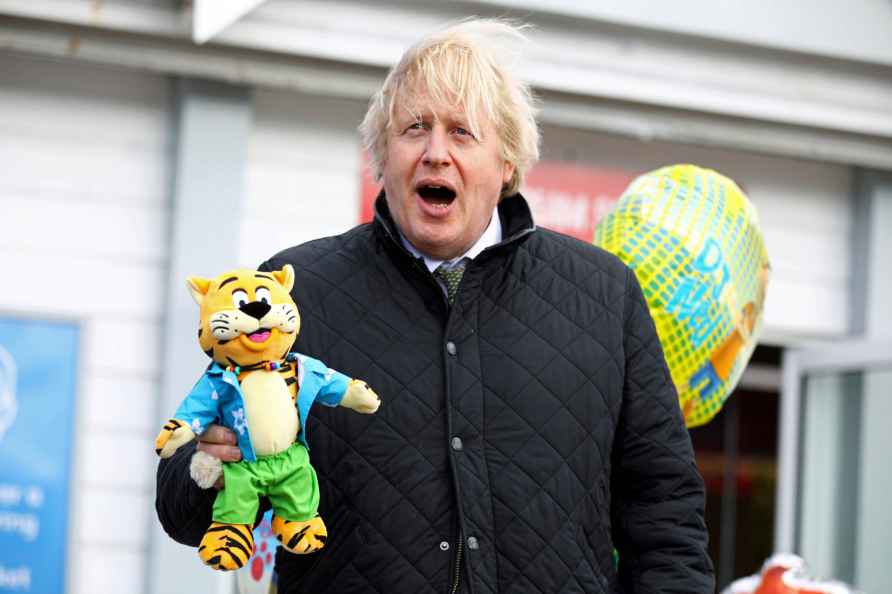 [Perranporth: Britain's Prime Minister Boris Johnson holds a toy tiger during a visit to Haven Perran Sands Holiday Park in Perranporth, Cornwall, Wednesday, April 7, 2021 to see how they are preparing to reopen ahead of Step 2 of the roadmap on Monday. Johnson has confirmed that businesses from barbers to bookstores will be allowed to reopen next week and that Britain's slow but steady march out of a three-month lockdown remains on track. /PTI] London, April 7 : UK Prime Minister Boris Johnson saidthat Britons should be "realistic" about international travel for holidays amid concerns over the third wave of the Covid-19 pandemic on the European continent. The government is yet to make a decision on whether Britons can go for a foreign holiday from May 17 as previously planned, Xinhua news agency quoted Johnson as saying on Tuesday. "That doesn't mean we've given up on May 17. I know how impatient people are to book their holidays but I think we just have to be prudent at this stage." The Prime Minister said that Britain should continue rolling out the AstraZeneca vaccine despite concerns about occasional reported cases of blood clots. Johnson said the current advice of Medicines and Healthcare products Regulatory Agency (MHRA), the UK's medicines regulator, is to "keep going out there, get your jab, get your second jab" and "we need to keep that going". The vaccines are already "starting to have a beneficial effect on the trajectory of the disease", said Johnson, noting the falling number of cases and deaths in the country. On Monday, Johnsonconfirmed that from April 12, non-essential shops will reopen and pubs and restaurants will reopen outdoors as Britain moves to step two of the roadmap out of the Covid-19 lockdown. Meanwhile, hairdressers and barbers as well as gyms can reopen, along with zoos, theme parks, libraries and community centres. However, experts have warned that despite progress in vaccine rollout, Britain is "still not out of the woods" amid concerns over new variants and the third wave of the pandemic across Europe. /IANS

Oruro: A police officer rakes up garbage in the polluted Tagaret...

Oruro: A police officer rakes up garbage in the polluted Tagaret River which flows into the Uru Uru Lake, near Oruro, Bolivia, Wednesday, April 7, 2021. A cleanup operation began Wednesday in an effor […]

Britons should be realistic about foreign holiday: PM

[Perranporth: Britain's Prime Minister Boris Johnson holds a toy tiger during a visit to Haven Perran Sands Holiday Park in Perranporth, Cornwall, Wednesday, April 7, 2021 to see how they are prepari […]

Allahabad HC asks Yogi to consider night curfew in UP

Prayagraj (Uttar Pradesh), April 7 : The Allahabad High Court has asked the Uttar Pradesh government to consider a night curfew situation as the state witnesses a surge in the number of coronavirus ca […]