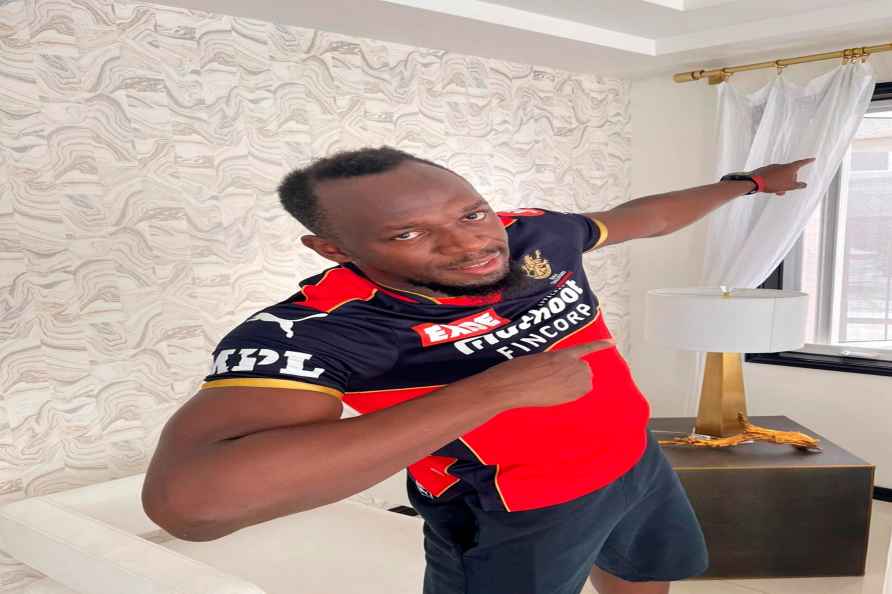 [**EDS: IMAGE POSTED BY @usainbolt ON WEDNESDAY, APRIL 7, 2021** Jamaica: Former Jamican sprinter Usain Bolt, donning Royal Challengers Bangalore (RCB)'s jersey, extends his support for the team ahead of the upcoming edition of Indian Premier League (IPL) slated to begin from April 9. ( /PTI] Chennai, April 7 : Royal Challengers Bangalore (RCB) fast bowler Daniel Sams has tested positive for Covid-19, the Indian Premier League (IPL) franchise said in a statement on Wednesday. Sams had a negative report upon his arrival on April 3, but was found to be positive on Wednesday during the second round of testing, RCB said. "Sams is currently asymptomatic and he is currently in isolation at a designated medical facility. The RCB medical team is in constant touch with Daniel Sams and continue to monitor his health and abide by the BCCI protocols," the team said. RCB will face defending champions Mumbai Indians in their first match of the season on Friday. Sams was traded in from Delhi Capitals along with Harshal Patel. Sams played for Sydney Thunder in the Big Bash League this year, picking 10 wickets at an economy of 8.58. He also scored 199 runs at an average of 49.75 with two half-centuries. It was his strike-rate of 191.34 that helped the Thunder to a large extent. /IANS

Gurugram: Fire personnel douse a fire which broke out in shops at...

Gurugram: Fire personnel douse a fire which broke out in shops at Sohna Chowk, in Gurugram, Wednesday, April 7, 2021. ( /PTI […]