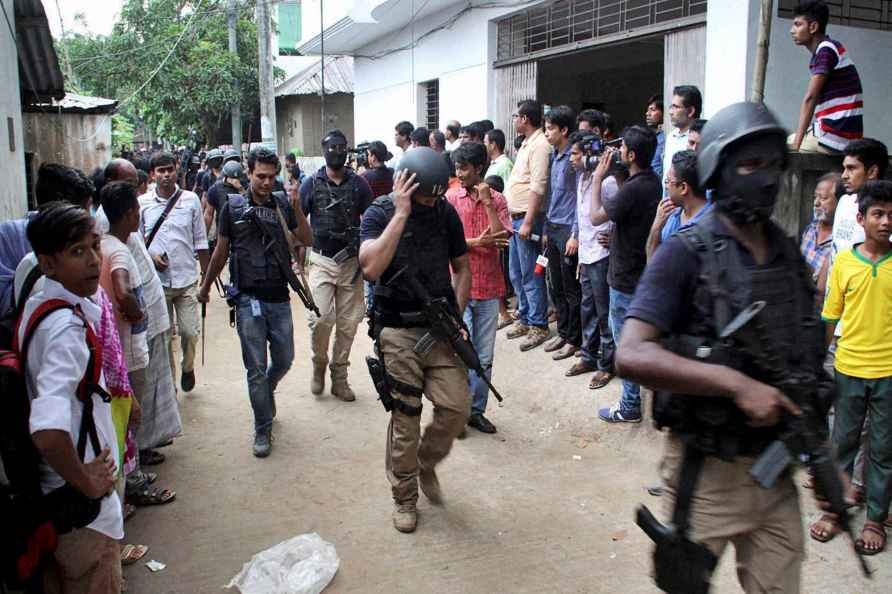 By Sumi Khan Dhaka, March 6 : A Dhaka court on Saturday placed three members of the banned militant outfit, Harkat-ul-Jihad-al Islami Bangladesh (HuJI-B), on a three-day remand. The three members include Mainul Islam, the group's former chief operations coordinator who had planned a major sabotage in Dhaka. He was arrested in 2015. The other two, Sheikh Sohan Swad and Murad Hossain Kabir, were arrested by a team of Counterterrorism and Transnational Crime (CTTC) from Dhaka's Saidabad area on Thursday evening. Five litres of acid, a personal vehicle, five mobile phones, a machete, two knives, 10 detonators, 180 bearing iron balls, a scotch tape, three ID cards and some other harmful items were recovered from the arrested members, CTTC officials confirmed to IANS on Saturday morning. The trio were trying to revive the militant outfit form its Shura (executive) committee, ensure funds, recruit members, collect arms and ammunitions, ensure bail for its jailed members and setting up training facilities in Bandarban-Naikhongchari by taking land on lease. According to the CTTC, the organisation was being reorganised in 64 districts under Mainul's leadership, full Shura committees were formed, funding was secured, members were procured, weapons were procured, bomb-making equipment was procured, and bail arrangements were made for imprisoned members. Mainul was working under the direction of another top millitant Abu Saeed, who was sentenced to life imprisonment in the case of the 2004 Dhaka grenade attack, and Mehedi Hasan, who was sentenced to life imprisonment in the 2000 attempted assassination of Prime Minister Sheikh Hasina. A case has been filed against the three under the anti-terrorism law at Jatrabari police station in the capital. /IANS

Hefazat preacher arrested in B'desh
By Sumi Khan Dhaka, April 8 : Rafiqul Islam Madani, a preacher of the Hefazat-e-Islam militant outfit in Bangladesh, has been arrested on charges o

Islamists, Covid-19 are challenges for B'desh govt: Obaidul Quader
By Sumi Khan Dhaka, April 6 : The militants and radicals using religion as their business and fighting the Covid-19 outbreak are the two major chal

Rome, April 8 : Finance Ministers and central bank governors from the world's largest economies have agreed on continued financial backing for countries struggling due to the coronavirus pandemic "as […]

Adarsh Gourav: 'I know the advantage of being middle-class'

By Arundhuti Banerjee Mumbai, April 8 : BAFTA-nominated actor Adarsh Gourav says a middle-class upbringing in smalltown Jamshedpur had its advantage. It helped him experience a wider perspective of […]

Vestige reiterates its commitment to women empowerment under its initiative: Let's Talk Period

New Delhi, April 8 : To enable dialogue around women's issues, Vestige, India's only home-grown direct selling company to feature in the top 30 companies of the world in the DSN Global 100 Awards list […]