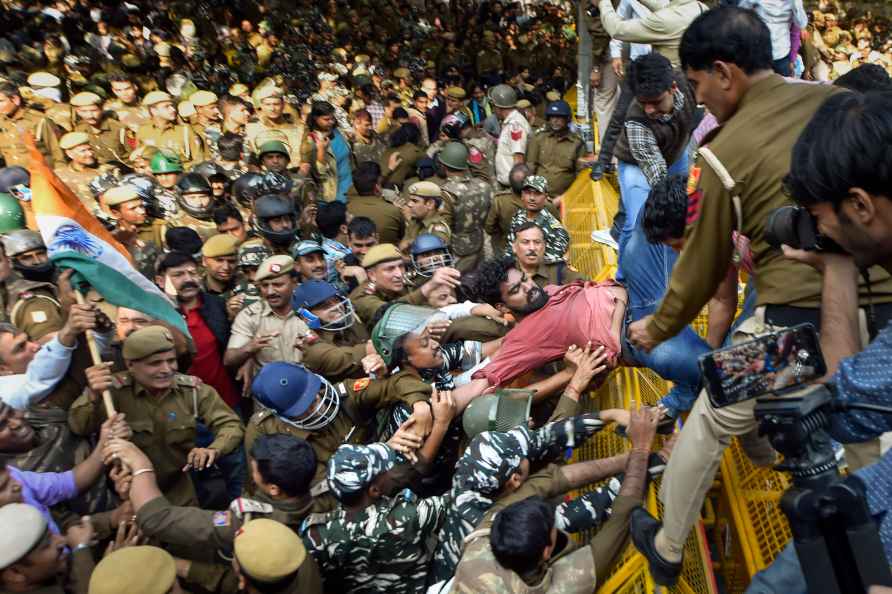 New Delhi, March 6 : Security arrangements have been heightened in Palwal district on the 136-km-long Western Peripheral Expressway, also known as Kundli-Manesar-Palwal (KMP) Expressway ahead of the five-hour blockade called by farmers. More than 125 police personnel, wearing safety gears and armed with batons, have been deployed at the Palwal toll plaza on the expressway, which the farmers will block from 11 a.m. to 4 p.m. Besides, a fire engine and ambulance have also been stationed on the spot to tacle any eventuality, said station house officer Anand Kumar of Sadar area in Palwal district. Security personnel have also been deployed on the protest site at Atoha, two kilometre away from the toll plaza. Riot control vans of the Rapid Action Force are also kept on standby. Vijay Pal, Deputy Superintendent of Police (DSP) said, "We are prepared. However, we are hopeful that the protest will be peaceful. In any case, ample security personnel are here." Agitating farmers have planned to block the KMP Expressway to mark the completion of 100 days of protest against the Centre's three contentious farm laws that they have been demanding to be rolled back since it all started on November 26. The six-lane KMP expressway was inaugurated by Prime Minister Narendra Modi on November 2018. It has 10-tolled entry and exit points, 52 underpasses and 23 overpasses. The ket highway network was built to decongest the ever-busy roads of Delhi, especially by reducing the number of trucks entering the national capital, thus helping to curb pollution. In the past over three months, the farmers have braved harsh weather conditions, but remained firm on their demands. Thousands of farmers, mostly from Punjab, Haryana and western Uttar Pradesh, have been camping at the Delhi border points Singhu, Tikri and Ghazipur to demand a complete repeal of laws, enacted in September, last year. The farmers want the repeal of the contentious laws and a legal guarantee on minimum support price (MSP). The farmers claim that the laws will weaken the MSP system. The Centre, however, has touted the laws as historic, long-needed reforms in the agriculture sector and said that it will bring investment to the market. It also assured that the MSP system will remain as it is. The agitated farmers fear that the laws will leave them at the mercy of the big corporates and end the 'mandi system,' where farmers are assured of a minimum price for their produce. Multiple rounds of talks have taken place between the government and the farm leaders, but so far it has failed to end the deadlock. /IANS

Washington, April 6 : The team of scientists and engineers behind NASA's Curiosity rover has named a hill along the rover's path on Mars in honour of recently deceased mission scientist Rafael Navarro […]