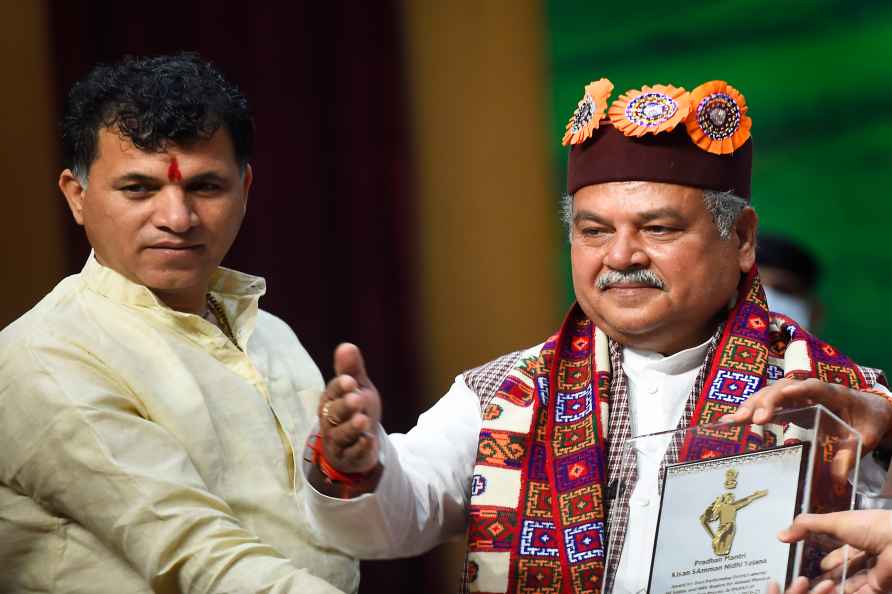 [New Delhi: Union Minister of Agricultural and Farmers Welfare Narendra Singh Tomar (R) and MoS Agriculture Kailash Choudhary during a function of the 2nd anniversary of 'Pradhan Mantri Kisan Samman Nidhi Scheme', in New Delhi, Wednesday, Feb. 24, 2021.( /PTI] New Delhi, Feb 24 : On completion of two years of NDA government's flagship programme PM-Kisan Scheme, Prime Minister Narendra Modi on Wednesday said the government is doing everything possible to double farmers' income, and many initiatives have been taken so far for transforming agriculture. The Prime Minister also said that the Central government had the honour of ushering a historic increase in Minimum Support Price (MSP) -- a matter on which farmers seeking written guarantee from the Centre. Prime Minister's statement comes amid ongoing farmers agitation on Delhi's various borders for the last three months seeking withdrawal of three contentious farm laws enacted in September last year during Monsoon Session, and guarantee of MSP. Noting that the PM-Kisan scheme has completed two years on Wednesday, Modi said the programme was launched with an aim to ensure a life of dignity and prosperity for farmers In a series of tweets the Prime Minister said, "On this day, 2 years ago the PM-Kisan scheme was launched with an aim to ensure a life of dignity as well as prosperity for our hardworking farmers, who work day and night to keep our nation fed. The tenacity and passion of our farmers is inspiring." "Over the last seven years, the Government of India has taken many initiatives for transforming agriculture. From better irrigation to more technology, more credit and markets to proper crop insurance, focus on soil health to eliminating middlemen, the efforts are all-encompassing," Modi said. "Our government had the honour of ushering a historic increase in MSP. We are doing everything possible to double the income of farmers. You can find insightful content on the NaMo App, offering a glimpse of the work done for farmers." It was the second anniversary of Pradhan Mantri Kisan Samman Nidhi, PM-Kisan scheme. The Prime Minister launched the scheme on February 24, 2019 at a function at Gorakhpur in Uttar Pradesh. The scheme was started with a view to augment the income of the farmers by providing income support to all landholding farmers' families across the country, to enable them to take care of expenses related to agriculture and allied activities as well as domestic needs. Under the scheme an amount of Rs 6,000 per year is transferred in three four-monthly installments of Rs 2,000 directly into the bank accounts of the farmers, subject to certain exclusion criteria relating to higher income status. The scheme is effective from December 1, 2018. The cut-off date for identification of beneficiaries with regard to their eligibility is February 1, 2019. The entire responsibility of identification of beneficiaries rests with the state or Union Territory governments. The scheme initially provided income support to all small and marginal farmers' families across the country, holding cultivable land up to two hectares. Its ambit was later expanded with effect from June 1, 2019 to cover all farmer families in the country irrespective of the size of their land holdings. /IANS

By Sumi Khan Dhaka, March 28 : At least 26 police personnel have been injured in Bangladesh during an attack carried out by the radical Islamist group Hefazat-e-Islam's activists. The activis […]

German minister calls for up to 14 days of strict lockdown

Berlin, March 28 : German Health Minister Jens Spahn on Saturday said he thinks a lockdown lasting 10-14 days is necessary to get the country's ballooning coronavirus outbreak under control. "If […]

Lisbon, March 28 : Portuguese Prime Minister Antonio Costa said on Saturday his government will step up efforts on vaccine rollout in April and administer as soon as possible the 1.8 million doses it […]