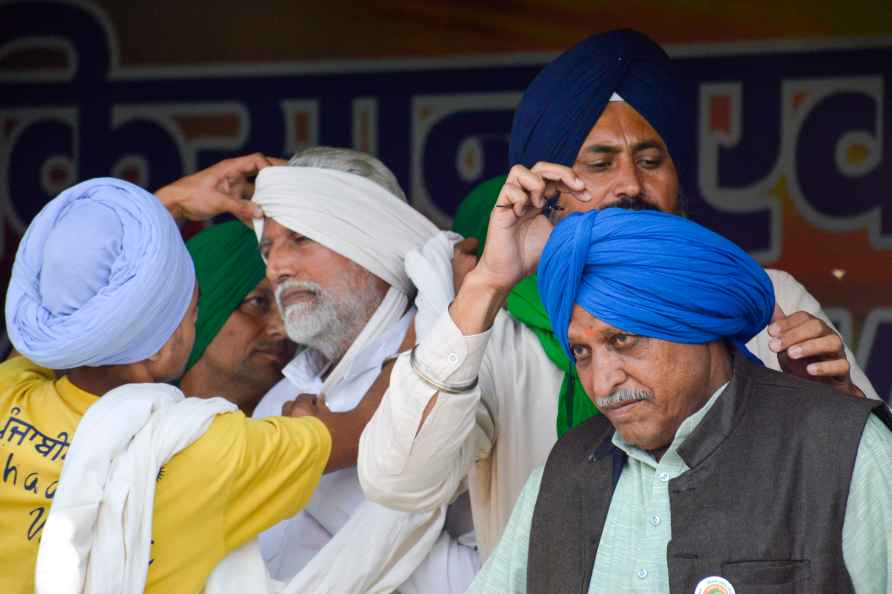 [New Delhi: Farmers wear turbans during an agitation against the new farm laws and observe ?Pagdi Sambhal Jatta? day in the memory of Sardar Ajit Singh on his birth anniversary, at Ghazipur border in New Delhi, Tuesday, Feb. 23, 2021. ( /PTI] New Delhi, Feb 23 : Farmers organised a 'Turban Day' at the Delhi borders to further boost the protests against the farm laws on Tuesday. Farmers wearing regional turbans displayed their opposition to the government's three agricultural laws. The peasants celebrated 'Turban Day' on the Singhu, Tikri and Ghazipur borders of Delhi, The farmer leaders said, "The government will have to withdraw these laws and remove the misconception that the farmers will go back." 'Turban Day' was celebrated in the memory of Ajit Singh and Swami Sahajanand Saraswati, farmers wore their regional turbans to express their self-respect. Farmers' organisations have taken some decisions in the coming days to strengthen their fronts on the border. On February 24, 'Anti-Suppression Day' has been announced in which "repression" on the farmers' movement will be opposed. On this day, memorandums will be submitted to the President at all tehsils and district headquarters. On February 26, on the completion of three months of the Delhi protests, the contribution of the youth will be celebrated as 'Yuva Kisan Diwas'. On this day all the forums will be run by the youth. Youths from different states have been told to reach the Delhi borders. Also, 'Mazdoor Kisan Ekta Divas' will be celebrated on February 27 on the martyrdom day of Guru Ravidas and Chandrashekhar Azad. /IANS

[New Delhi: Farmers wear turbans during an agitation against the new farm laws and observe ?Pagdi Sambhal Jatta? day in the memory of Sardar Ajit Singh on his birth anniversary, at Ghazipur border in […]

Thiruvananthapuram: Kerala Public Service Commission rank list holders for the post of Forest Watchers during a protest, demanding the appointment and seeking an end to regularisation of temporary sta […]

Plush panda bears at the tables of closed restaurant

Frankfurt: The owner of a closed restaurant has placed plush panda bears at the tables in central Frankfurt, Germany, Tuesday, Feb. 23, 2021, as Germany is still in a partiallockdown. /AP-PTI […]