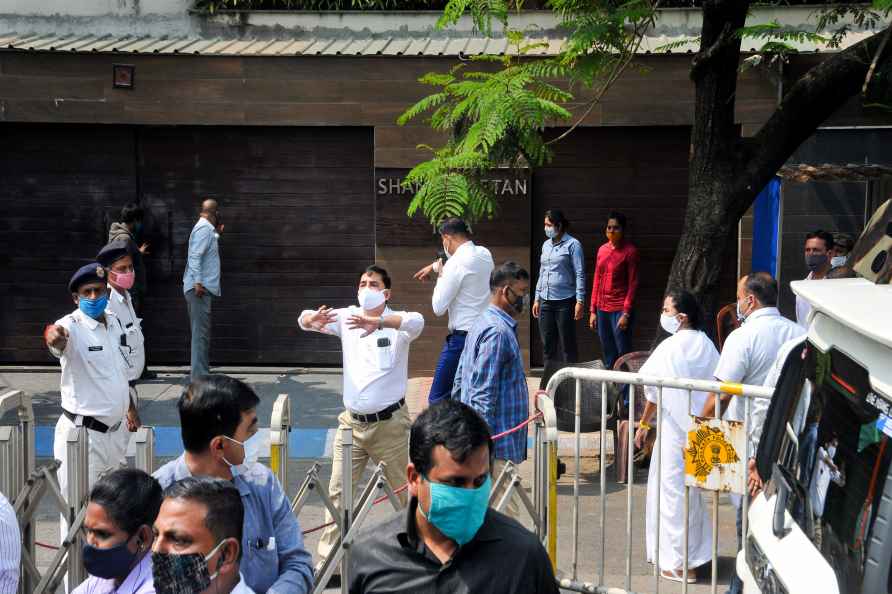 [Kolkata: West Bengal Chief Minister Mamata Banerjee at her nephew and TMC MP Abhishekh Banerjee's residence before the arrival of CBI team, in Kolkata, Tuesday, Feb. 23, 2021. CBI has summoned Banerjee's wife Rujira Banerjee in connection with an alleged coal smuggling scam. ( /PTI] Kolkata, Feb 23 : A team of Central Bureau of Investigation (CBI) officers arrived at the residence of Trinamool Congress MP Abhushek Banerjee to question his wife Rujira Banerjee in connection with its probe into the illegal coal smuggling case, minutes after West Bengal Chief Minister and Trinamool Congress supremo Mamata Banerjee left from his residence. The team of CBI officers arrived at the residence of Rujira in two vehicles. Banerjee, who arrived at Abhiahek's residence ahead of CBI team, stayed at his residence for over 10 minutes. Abhishek Banerjee is the nephew of the chief minister. The CBI team had served a notice to Rujira on Sunday for questioning in connection with the case it registered in November last year. The CBI held Rujira Banerjee 'Naroola' as acquainted with the "circumstances" of the coal theft case. She is not named in the case. On Monday, an eight member team of CBI also questioned Rujira's sister Menka Gambhir for over two and half hours in connection with the case. The CBI had registered a case of illegal theft of coal against coal mafia Anup Majhi alias Lala, his deputy J. Mondal, and other unidentified people, including some employees of the Eastern Coalfields Ltd. and of other Central government offices. It was alleged that Majhi was involved in coal theft from the leasehold mines of the ECL in Kunustoria and Kajora areas. On November 28 last year, the CBI had conducted raids at 45 locations in West Bengal, Bihar, Jharkhand, and Uttar Pradesh in connection with the coal smuggling racket. /IANS

RCB show how they planned Maxwell bid in video

Inauguration of CAP in Hyderabad