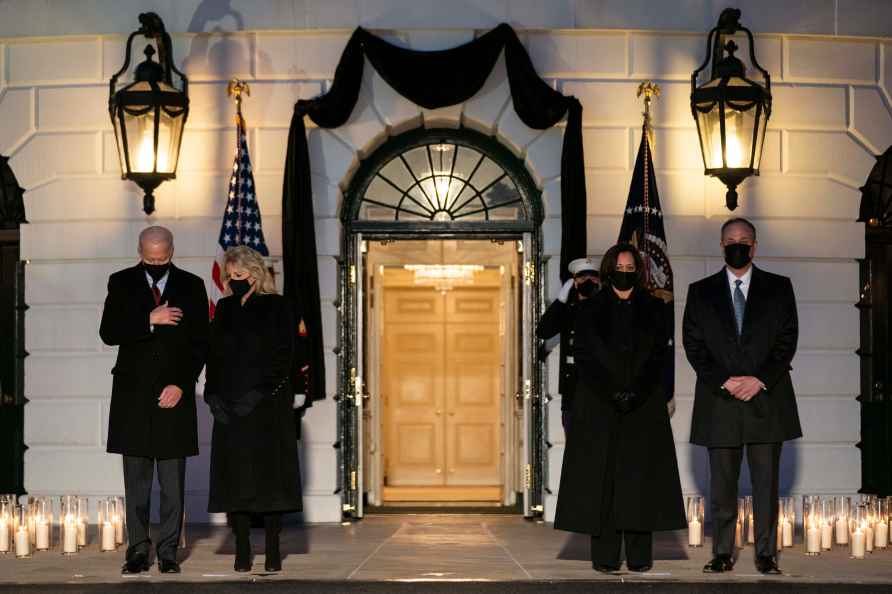 [Washington:President Joe Biden, first lady Jill Biden, Vice President Kamala Harris, and Doug Emhoff participate in a moment of silence during a ceremony to honor the 500,000 Americans that died from COVID-19, at the White House, Monday, Feb. 22, 2021, in Washington. /PTI] By Nikhila Natarajan New York, Feb 23 : On February 22, 2021, America woke up to a terrifying statistic: More than 500,000 dead from the coronavirus in the country's deadliest year. That is more Americans who died in a single year than in World War I, World War II, and the Vietnam War combined. The first blow came in February 2020. The virus killed a man in his 50s on February 29, in California, and the country's Covid-19 curve began its catastrophic climb. This unprecedented American tragedy followed a series of mis-steps by the Trump administration and state officials, combined with a testing disaster and utter misinformation from the previous White House. At its worst, during the pandemic's winter surge, more than 150 people were dying every hour, and the US recorded 4,400 deaths on a single day the week before Joe Biden was inaugurated. One month into the Biden presidency, the country's infection curve is turning direction, for the first time in several months. Biden's Covid 19 task force is hoping the country can avoid a fourth surge. Schools are planning for expanded hybrid classes, and the country is on track to have enough shots for 300 million Americans by July. Two remarkable shifts headline the still evolving American turnaround: Vaccines and public health communication. The Trump show has been replaced by thrice-a-week Covid-19 briefings within a week into Biden's tenure. The briefings feature short remarks by domain experts who bring charts and data -- rarely over 15 minutes each, bookended by a Q and A session. After 11 briefings, the details offer us a sense of how Americans will emerge from their bubbles, even as the numbers proceed to the next grim milestone. Nothing explains America's path to reopening better than recent data from Biden's Covid-19 task force huddles. Below are highlights that capture the state of the pandemic one year on from the time when Americans had no idea what was going to hit them. The vaccination effect is here. New cases and new hospitalisations are both going south. Covid-19 in the US has been declining for five weeks with the seven day average dropping 74 per cent since the peak seven day average on January 11. The current number is approximately 66,000 cases per day and similar to the Summer 2020 peak. The seven day average for new hospital admissions at 6,500 a day reflects a 60 per cent decline since the peak seven day average on January 9 and is the lowest seven day average in hospital admissions since last Fall. The number of reported deaths is also slowing with the latest seven day average at slightly more than 1,900 deaths per day. This is the lowest since the beginning of December 2020. Vaccines for kids are coming by Fall, says Biden's chief medical advisor Dr. Anthony Fauci. Pfizer, which initially tested its vaccine on 44,000 adults, has recruited younger populations up to 12 years old. In April, the company plans to study the vaccine in children younger than 12 down till 5 years. Results are likely to take at least a year. However, data on school age children between 12 years old to 17 years old is expected around the 2021 Fall term. Moderna is currently enrolling 12 to 17 year olds. These will be representative trials, with around 3,000 participants to test for "non-inferiority by immunogenicity", Fauci said. The investigation hopes to establish whether the vaccine is safe in children and if it induces an immune response that's comparable or not inferior to the immune response associated with efficacy in other trials. Decisions on vaccinating elementary school children will likely not be firmed up until the first quarter of 2022, according to Fauci. The debate over reopening schools continues to rage. As on date, 18 per cent of US counties have Covid-19 levels at low or moderate levels - consistent with full in-person learning for all K-12 schools according to CDC guidance. About 22 per cent of US counties are at substantial level spread and the CDC has recommended hybrid learning or reduced in-person attendance for all K-12 schools in this colour coding. For 60 per cent of counties that remain in the red zone or high transmission, the CDC guidance is for K-5 students to return to school in hybrid or reduced in-person attendance, and virtual-only for middle and high school schools. More than 44 million in the US have got at least one dose of the vaccine and more than 19 million have got both their doses. In both those categories, more than 60 per cent of those vaccinated are Whites, while Asians and Black account for around 5-7 per cent of total vaccinations. The US is averaging 1.7 million shots per day, up from 1.1 million four weeks ago and 892,000 the week before Biden took office. Despite the steady progress, the US is headed towards 600,000 deaths by June this year, according to a predictive model from the University of Washington. In several states which have begun easing restrictions, the numbers have already started to creep back upwards. "It's almost unbelievable," Dr. Anthony Fauci said of the half a million death toll "But it's true." /IANS

[Washington:President Joe Biden, first lady Jill Biden, Vice President Kamala Harris, and Doug Emhoff participate in a moment of silence during a ceremony to honor the 500,000 Americans that died from […]

Rubina Dilaik: Not for a single day will I take my relationship for granted

Mumbai, Feb 22 : Bigg Boss 14 winner Rubina Dilaik had openly spoken about going for a divorce with husband and former contestant Abhinav Shukla in the show. However, she now tells us their stint on t […]

Barcelona:Demonstrators take cover from the rain as they gather ahead of a protest condemning the arrest of rap artist Pablo Has....l in Barcelona, Spain, Monday, Feb. 22, 2021. Pablo Hasel spent 24 h […]