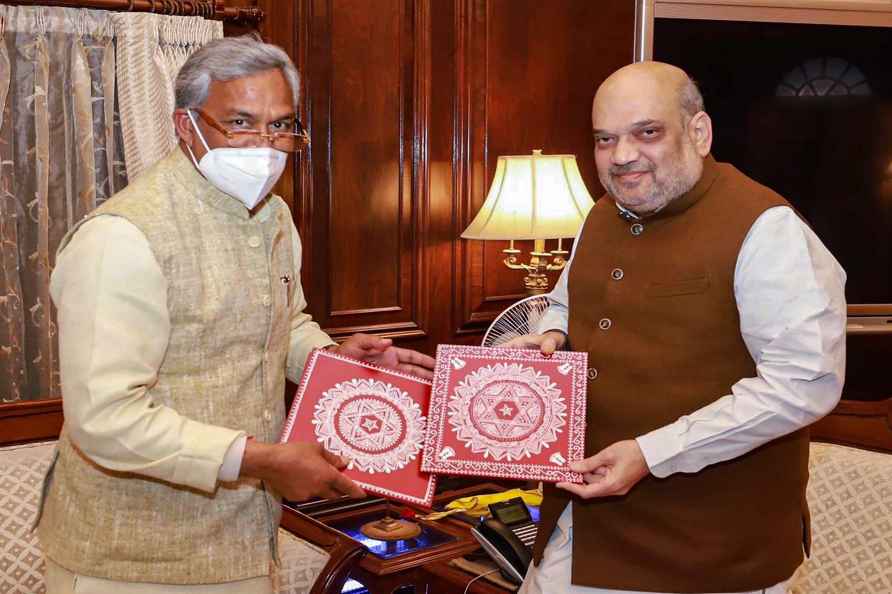 [**EDS: HANDOUT PHOTO MADE AVAILABLE FROM CM OFFICE ON MONDAY, FEB. 22, 2021** New Delhi: Uttarakhand Chief Minister Trivendra Singh Rawat with Union Home Minister Amit Shah during a meeting on ongoing relief and rescue operations in flash-flood hit Chamoli district, in New Delhi. ( /PTI] New Delhi, Feb 22 : Union Home Secretary Ajay Bhalla is to hold a multi-agency meeting on Monday evening to review relief and rescue operations in Uttarakhand where flash floods triggered by an avalanche wreaked havoc earlier this month. ITBP chief S.S. Deswal along with other officers of the force as well as officials of National Disaster Response Force (NDRF), India Meteorological Department (IMD), and National Disaster Management Authority (NDMA) are to join the meeting. Some officials of the Uttarakhand government are also expected to atted the meeting through video conferencing, a source said. Along with reviewing ongoing rescue and relief operations being taken by the ITBP and NDRF rescue teams in the hilly state, the Home Secretary will also take inputs regarding Ronthi glacier and the natural lake formed after the natural disaster. Bhalla is also expected to review the situation after fresh inputs received regarding rise in the Rishiganga-Dhauliganga river beds which may pose a fresh threat to Chamoli district of Uttarakhand where the deadly flash floods triggered by a snow avalanche on February 7 had washed away a 520 MW downstream NTPC hydro power project at Tapovan and covered an approximately 14 sq km area. Citing an authentic study, Uttarakhand District Magistrate Swati Bhadauria confirmed to IANS about the rise in the Rishiganga-Dhauliganga river beds. The Home Secretary is also expected to get information regarding reports collected by a joint team of ITBP and the Defence Research and Development Organisation (DRDO) which recently completed its inspection of a natural lake formed in Chamoli's Murenda area at the catchment of the turbulent Rishiganga river. Another team of the Geological Survey of India (GSI) and Wadia Institute of Himalayan Geology is also on the spot since Saturday to inspect the lake whose frontage is approximately 90 to 100 metres and length is around 500 metres. Nearly 204 persons went missing after the deluge in the Rishiganga river that also completely destroyed the 13.2 MW Rishiganga project. Meanwhile, scientists and other agencies are continuously observing the Rishiganga lake at a height of 14,000 feet in the Himalayas in Chamoli district. SDRF personnel at Pang and other areas along Rishiganga lake are also closely monitoring the flow of the Rishiganga river. The lake appears to be 750 metres long and has a huge quantity of water which can pose a big threat to the downstream areas of Rishiganga river, SDRF officials said. /IANS

Dwarka: Nikita Jacob appears in connection with allegedly being involved in sharing a 'toolkit' on social media related to the farmers' protest, at Cyber Prevention Awareness and Detection (CYPAD) Cen […]