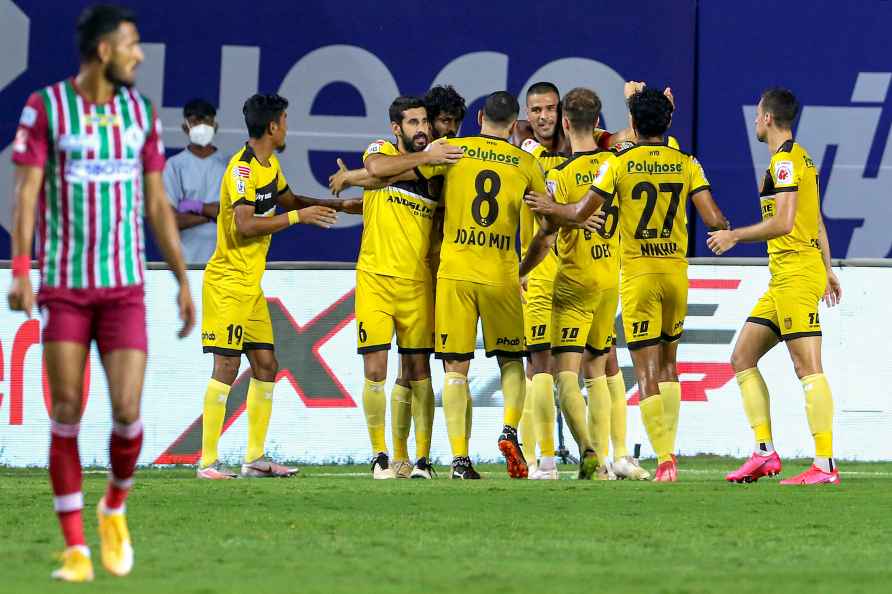 [Goa: Hyderabad FC players celebrate a goal during the 7th season of the Hero Indian Super League between Hyderabad FC and ATK Mohun Bagan held at the Tilak Maidan Stadium, Goa, Monday, Feb. 22, 2021. ( /PTI] Margao (Goa), Feb 22 : NorthEast United will be looking to keep the pressure on Hyderabad FC and FC Goa in the race for the top four when they face SC East Bengal in the Indian Super League at the Fatorda Stadium. As the race for the top four goes down to the wire, NorthEast are placed fifth on the league table and are breathing down the necks of Hyderabad FC and FC Goa above them. Their inferior goal difference compared to the two teams means that they will have to win their remaining two matches while hoping that one of the other two drop points. "We have to play very well. We have to defend well, we have to attack well, we have to create chances and then utilise them and give our 100 percent. This is a game we cannot take easy. We have to show character and give our best throughout 90 minutes and hopefully, we will get three points tomorrow," said assistant coach Alison Kharsyntiew. East Bengal had every chance of progressing into the playoffs but their attack let them down. In the last one month (since January 21), the Kolkata side has scored just five goals in six matches, having recorded just 13 shots on target in these games, the lowest among all teams. However, with just two games left now, SC East Bengal assistant coach Tony Grant believes this could be a real test for his side when they take on the Highlanders on Tuesday. "To play for this club, you have to be able to roll your sleeves up. It's a great test for our boys to show us their quality," said Grant. "I think they are great. I think they started the season really well and looking at their recruitment, they have got a good blend of youth (and experience) in their team. They are in the top four and they deserve to be up there. It's going to be a big test for our lads. And that's the best time you will get to see what your players are made of," he added. /IANS

New Delhi, Feb 22 : Sony on Monday launched its latest premium wireless speaker 'SRS-RA3000' at Rs 19,990 in the Indian market. The product will be available across Sony retail stores, www.Shopa […]