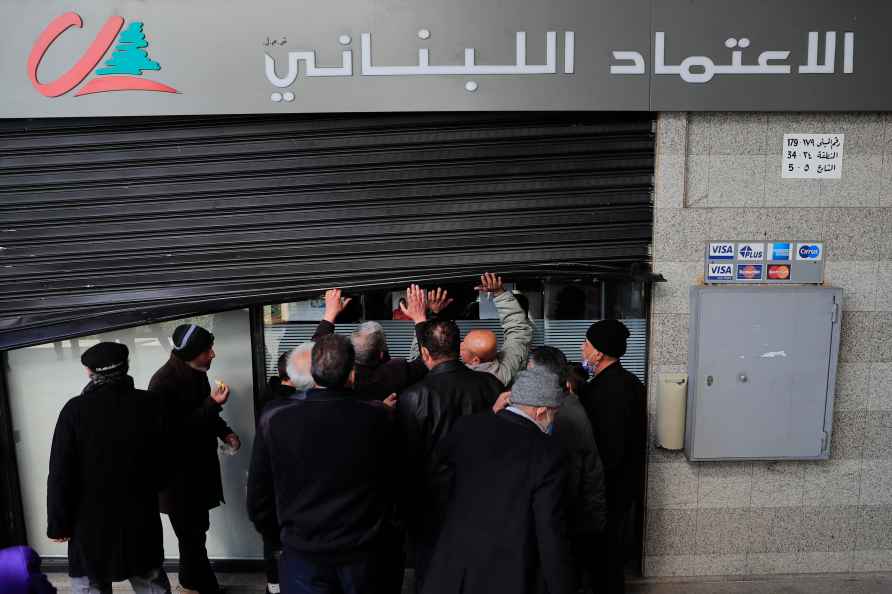 [Beirut: Parents of Lebanese students who study abroad break the door of a bank after they tried to prevent bank employees to do their jobs, during a protest demanding that banks allow the transfer of universities fees for their children studying abroad, in Beirut, Lebanon, Monday, Feb. 22, 2021. Since 2019, the Lebanese currency has lost over 80% of its value and banks have imposed controls on withdrawals and transfers to protect dwindling foreign reserves. /PTI] Mumbai, Feb 22 : As the recent rise in bond yields both in the domestic and the US markets has caused a frenzy in the stocks markets, short selling by market players may be a major reason for the rise in yields. An SBI Ecowrap report noted that while going short or long are typical market activities that aid in price discovery, at times, they can also result in price distortions, as it might be happening now. "We believe one of reasons for the recent surge in yields might be short selling by market players," it said. The strategy of short selling involves the sale of a security which the seller has not yet purchased but borrows from others in the market. The report noted that the banks and the primary dealers resort to short selling when their view is bearish, that is, the prices of the bond will fall and the yield will rise. They make money if the bond prices drop and yields rise, and over a point of time, this could become a self-fulfilling prophecy as such short sellers keep on rolling over their borrowed security from the repo market till the time they believe that yields will continue to rise. According to the SBI report, the only way to break such self-fulfilling expectations is for the Reserve Bank of India (RBI) to conduct large scale open market operations (OMO) to provide necessary steam to bond market to rally and with increase in price, many short sold position will trigger stop losses and market players will scramble to cover open positions. "This will hasten a rapid fall in yields over a short period of time," it said. It noted that the current fiscal is an interesting year with the two halves having diametrically opposite narratives. During the first half, bond yields were mostly below 6 per cent on the back of effective yield management by the RBI. However, all this changed after the budget when the government upped its borrowing programme for the current fiscal and has announced an aggressive one for FY22. With just over a month left in FY21, the market is still expecting a consolidated borrowing amount of more than Rs 2.5 lakh crore as per the auction calendar of Centre and the states. The average increase in government securities (G-Sec) yields across 3,5 and 10 years is around 31 basis points since the budget. AAA Corporate bond and SDL spreads have jumped by 25-41 basis points during this period. The report said that while this significant increase in bond spreads is a manifestation of the nervousness of market players, the central bank will have to resort to unconventional tools to control the surge in bond market yields. This is important as any further upward movement in G-sec yields even by 10 bps from the current levels could usher in MTM losses for banks that could be a minor blip of a rather wise exceptional year in FY21 bond markets with the RBI assiduously supporting debt management of the government at lowest possible cost in 16 years, that otherwise could have threatened financial stability. The report also observed that the RBI has used all tools at its disposal in FY21 to manage a humongous government borrowing programme that perhaps was not the case prior to it, particularly during FY17-19. The markets have however moved a step ahead of the RBI post budget. "It is now time for the RBI to align the market expectations with its stated objective," it said. /IANS

Rise in bond yields caused by short selling by traders

[Beirut: Parents of Lebanese students who study abroad break the door of a bank after they tried to prevent bank employees to do their jobs, during a protest demanding that banks allow the transfer of […]

**EDS: HANDOUT PHOTO MADE AVAILABLE FROM Department of Information and Public Relations ON MONDAY, FEB. 22, 2021** Jammu: J&K Lt Gov. Manoj Sinha during the Horti-Expo 2021 at Gulshan ground in Jammu, […]

Berlin, Feb 22 : RB Leipzig capitalised on Bayern Munich's third defeat of the season, beating struggling Hertha Berlin 3-0 to reduce the gap at the top of the Bundesliga to two points. The Bull […]